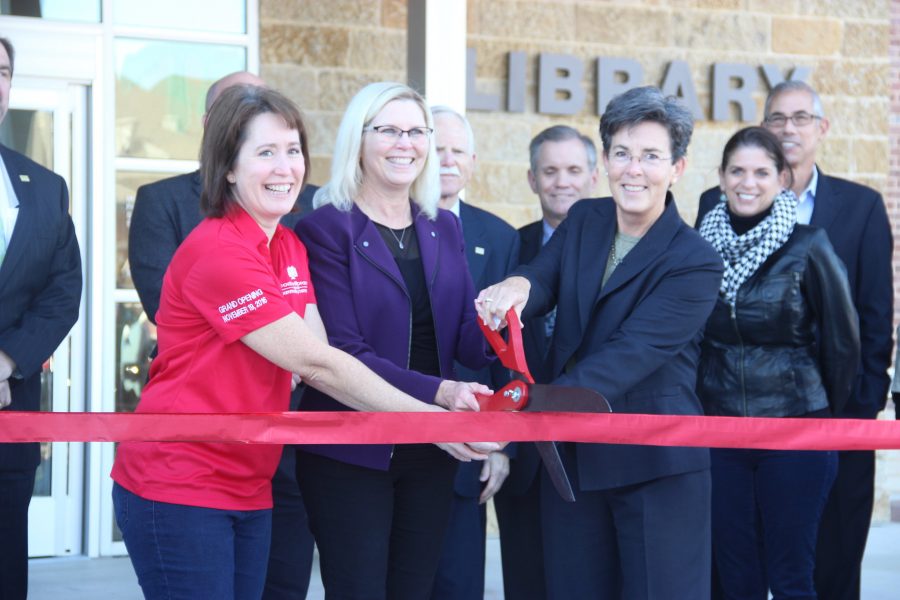 The ribbon is cut at the Grand Opening Celebration of the Cozby Library and Community Commons on Nov. 19. The event featured tours of the new building, as well as demonstrations and performances by the Fortissimo Five, James Wand and Liberation Coffee.

The William T. Cozby public library, having been under construction for over a year, reopened its doors on Oct. 31.

In an effort to spread the word, the library held a day long event on Nov. 19, welcoming all Coppell residents to come and celebrate. The function aimed to spread the word on the recommencement of Coppell’s new and improved public library.

“We’re proud of this building, and we want people to know that it’s reopened since the library has been closed for over a year,” event coordinator and library director Vicki Chiavetta said. “It is really important for the community to find out all the different things that we have now that the buildings been remodeled and back open again.”

Despite the crisp, chilly morning air, Coppell residents gathered around the front of the library at 9 a.m. for a Boy Scout salute, recognition speeches and a ribbon cutting ceremony to commemorate the reopening of the facility.

After the ribbon cutting, residents were invited into the library, kicking off the day of fun with a slice of cake and tour of the new library.

Throughout the day, families filed into the library, eager to see the transformed spot and participate in the various activities going on, both inside and outside.

“I love [the new] library. I love all the windows along the back overlooking the water, and the study areas that they have and the separate areas for story time,” Coppell resident Michelle Zenici said. “It’s just a really fun event for the community.”

Food trucks were parked near the west wing of the library, offering foods varying from Cajun cuisine to pizza. A train took excited kids on rides around the field, who happily hopped on and then afterwards, headed to the little petting zoo set up alongside the food trucks.

Within the library itself, volunteers set up a craft station, giving kids the chance to create their own mini masterpieces from ordinary materials such as straws and picture frames.

“The new library has a great atmosphere with all of these kids running around,” Coppell High School junior volunteer Tarun Gunnabathula said. “It’s fun helping them and watching them smile. Plus, the new place itself looks amazing.”

Near the children’s section, an area was set up for children to request balloons of all shapes and sizes and get their faces painted.

“You put a little tiger on the kid and you made their day, they get a big smile,” Party Faces owner Gary Cole said. “It’s very rewarding to make these children smile, and it’s fun.”

Entertainment continued on into the evening when the local band Fortissimo Five made an appearance, along with magician James Wand.

“I’ve been excited about this project for a long time just because I’ve been involved in it so closely,” Chiavetta said. “Just knowing the different things we have [been] doing and being able to show people those things is very exciting because we’ve got a lot of new things that people are not going to expect in the library.”