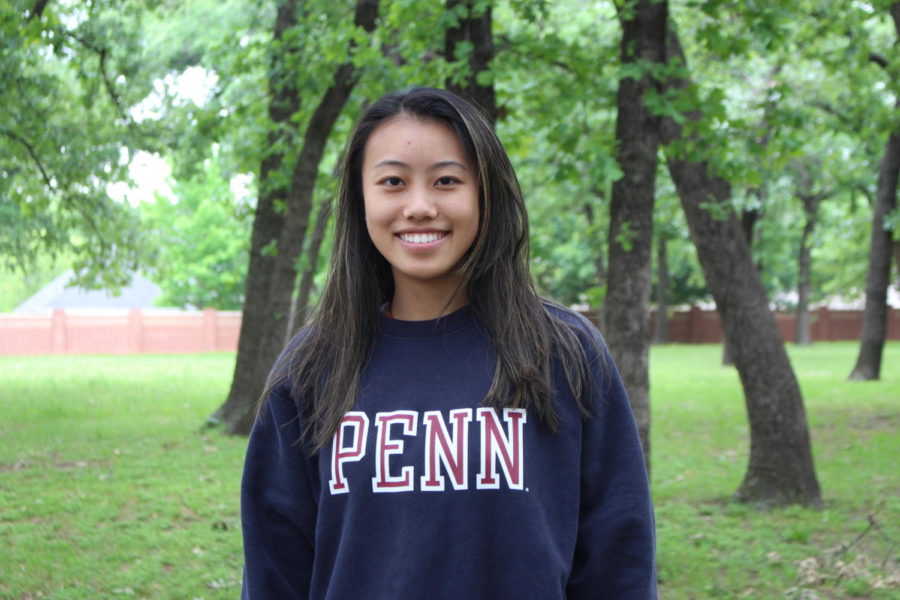 Coppell High School senior Grace Hao found out on Dec. 13 that she was accepted to the University of Pennsylvania and will major in finance at the Wharton School of Business. Additionally, she has been part of the Fencing Institute of Texas in Carrollton for eight years and will continue fencing in college.

Why did you choose to pursue finance?

I’ve always been interested in money management and that aspect of business, so I thought it’d be really cool and interesting to pursue finance. We’ve never really learned about finance at school, and I just thought it’d be cool to see what it’s like in college.

When did you choose to major in finance?

When I was looking through the different concentrations they had at Penn for the business school, I was watching these videos about it. There was this video that was talking about the finance program, and they had so many resources, and I’d heard so many good things about the professors, and just the major in general, which made me want to pursue finance.

How did that affect your college application?

I realized I really wanted to go [to the University of Pennsylvania] after I saw their program. They had a really good fencing team, and I was a fencing recruit, so I spoke with the coach. I really liked the school and the program, so after doing research about the academic aspect of the school, I also really liked that, which is what inspired me to apply.

January of my junior year, I spoke with the coaches and they prescreened my academic information, and they told me I would be able to get in if I kept up my grades. When I actually applied, I did the normal application like everyone else, but I got an early response back from admissions [in October], and they told me I’m basically in if I can keep it up until the official date.

When did you find out you got into the University of Pennsylvania?

I found out before the admissions decision came out; the admissions [staff] responded to my application, and that felt really exciting because it wasn’t 100%, but it was a 99% guarantee I was going to get in. That just made me really excited because I felt like a weight was lifted because everything was basically over after four years of high school and so many years of fencing. It just felt really relieving and really happy that it all built up for this. On the actual early decision day, it felt really fun because I got to experience it like everyone else. It was just really exciting to see what I accomplished.

What are your future goals?

My goals are to be able to manage my time well with fencing and with my classes because I heard that the classes are relatively difficult. For after college, I’m really interested in working in finance, but I also want to do something to give back to the community, so after college will be based on that.

What challenges do you expect to face?

Challenges will really be time management, but everyone on the fencing team is really nice and really helpful in terms of what classes to take and which teachers are good. That will really help me, especially in my first year. Also, I won’t try to take too many hard classes, so hopefully that will help me get into the flow of it before it gets too hard.

Why did you start fencing?

I started in when I was in fourth grade; I just saw it on TV, and I thought it was really interesting, and I continued it until now. Then I realized it would help for college, and it was really exciting that I realized I could continue it in college as well because I’ve liked it for the past eight years.

Do you have experience with finance?

I actually haven’t done anything, but that’s what makes me so excited for it, because it’s something new and I like to learn new things and acquire new skills. This will be a good experience for me.

What do you think about leaving Texas?

I will be nervous because I’ve always been in Texas, and I really like it here, and a lot of my friends are staying in Texas. I might be kind of lonely there, and it’s really cold, but I’ll try to make friends. I’m more excited than scared because it’s a new experience.

I’m really looking forward to the professors, because I heard the school has really good professors, and they’re all really experienced in their subjects. This will be really exciting for me because I get to learn from their experiences and their knowledge.