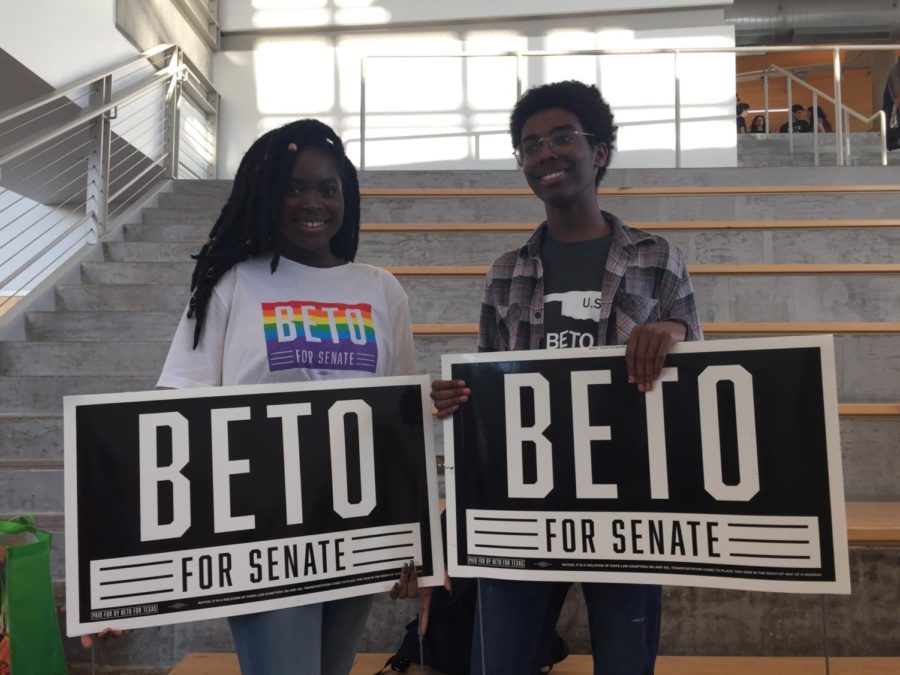 Ola Olaleye and Awab Ahmed show their support for Beto O’Rourke at his UTD rally on Oct. 6. UTD students and other members of the public attending to hear O’Rourke speak about his platform and the upcoming election.

Coppell High School junior Carrie Sheffield has felt the nation’s fissure for years. The country’s divide reached her doorstep in 2016, and like the Senate floor, ardent ideas have collided.

“I became involved in politics during the Presidential Election,” Sheffield said. “That’s when I realized my parents’ views were different from mine.”

Carrie’s mother, Shanna Sheffield, explained these disagreements do not negatively affect their relationship.

“I am proud of her for thinking for herself and I enjoy our debates,” Mrs. Sheffield said. “We are both respectful of each others opinions, and I appreciate that we both have reasons to support our positions.”

As plastic signs endorsing candidates permeate lawns throughout Coppell, students are solidifying their political views in the wake of the Texas Senate election. Some are mirroring the views of their parents, while others are creating their very own. However, it is certain for all that the race between Democratic Congressman Beto O’Rourke and current Republican Senator Ted Cruz cannot be ignored.

“I’m big on staying aware of current events,” Carrie said. “I’m not always debating everything, but I like knowing what’s going on.”

Carrie said she would vote for O’Rourke if she were of age, and she owes the development of her ideas that contradict those of her parents to her personal research. Much of her research includes visiting the websites of political candidates and reading about their stances on issues. Carrie said she especially butts heads with her parents in the topics of immigration and abortion laws.

“I agree with the President’s plan to construct a wall across the U.S-Mexico border, to an extent,” Shanna said. “We have immigration laws for a reason.”

Furthermore, Carrie thinks women should have control of their own bodies and easy access to Planned Parenthood. Her mother is against abortion.

“I consider myself pro-life. I was adopted and I probably wouldn’t be here if abortions were available, so for my experience it just makes sense,” Mrs. Sheffield said. “Also there are many families who would love to have children, so I’m more pro-adoption.”

Coppell High School junior Ryan O’Toole has also developed his own political views, but contrary to Carrie, his mirror those of his Republican parents.

“Everybody’s political views are at least partly shaped by their parents, they shape our upbringing as a whole,” O’Toole said. “However, I’ve also kept up with the news, and I’ve done my research on my own. My parents wouldn’t care if I pertained to a different party.”

These Coppell residents all agree that it is important to explore all viewpoints while forming your own political opinions.

“I think it just depends on the child,” Shanna said. “For example, my other daughter was never as politically involved as Carrie, so every child just has their own experiences.”

The current political climate has parents around the city and nation wondering how much free reign they should give their children and at what age they should be exposed to the “real world”.

“I have a 10-year-old who is pretty mature for his age, and I’ve always been of the mind that kids can understand so much more than what we give them credit for,” CHS English teacher Melissa Alexander-Blythe said. “I’m constantly reminding him of the importance of forming his own political opinions and being able to understand and defend them.”

Alexander-Blythe motivates her students and her own children to be active in the world around them.

“My goal is to raise my child to think, not to teach him what to think,” Alexander-Blythe said.

The level of how much impact politically-knowledgeable young people have had so far has been debated. But a hardly disputed claim is that voting is essential for people of all ages.

“If you show up where young people are and allow them to lead, not only will they vote, they will decide the outcomes of these elections and the future of our country,” O’Rourke said. “Tell me one issue where the youth is not leading the line.”

Dozens of celebrities including Beyonce, Taylor Swift, Gucci Mane and Ice Cube have encouraged young voters across the country to go cast a ballot. The two candidates themselves have called for participation.

“This year more than any others the youth vote will decide an outcome that will not just affect Texas, but the whole country,” O’Rourke said.

Alexander-Blythe thinks it is not only one’s civic duty to vote, but to cast an informed vote.

“[Voting is] the way we contribute to our democracy,” Carrie said. “If you don’t vote, you have no right to complain about the outcome.”

Students at CHS are taking different paths when forming their political views. Which views will be implemented will not come down to who has the most yard signs, the loudest promoters or the prediction polls on their side. 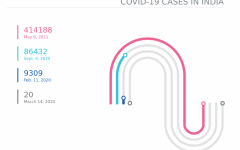 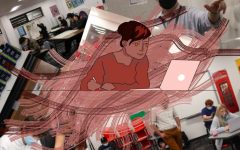 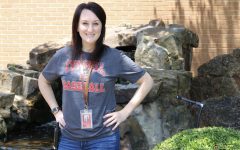 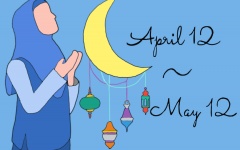 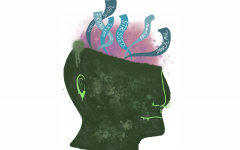