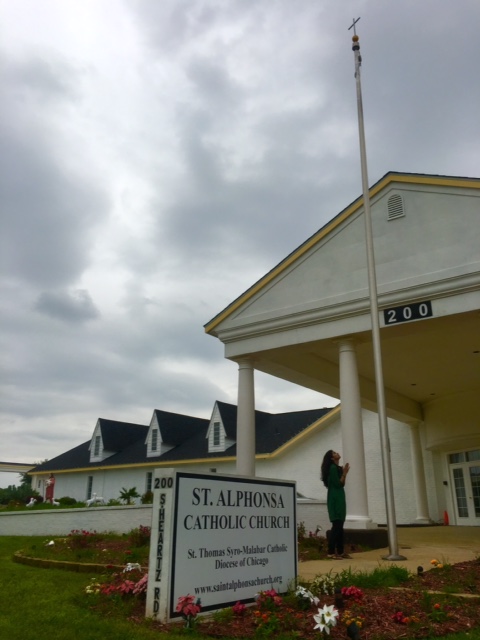 A Hindu's venture to the Church

Staff Writers Meha Srivastav, a Hindu, and Briana Thomas, a Catholic exchanged their religions for a day and visited a temple and church together. This is an article about Srivastav’s experience-

I grew up reading comics of Hindu folklore, attending puja (prayer) groups every week and being herded to coloring book competitions of legends of Gods.

As I grew older, temple visits succumbed to a drought. I grew into myself and out of religion, with only a frayed thread that my parents had spun still connecting us together.

But one Sunday, I attended Mass.

It was not the first time I visited a church. A few years ago,I had walked into the gilded hollow of the Basilica of Bom Jesus in Goa, India, and was in awe of the ancient holiness with which the Church still stood, centuries worn. I saw the relics of St. Francis Xavier, a Catholic missionary eminent in India, lay before me in a once-jeweled cask.

Yet, I was not just a tourist this time, when I visited the St.Alphonsa Syro-Malabar Catholic Church in Coppell- this time, I read the prayer book while the Christians around me sung prayers in Malayalam (the language spoken in Kerala, a South Indian state on the Malabar coast), clasped my hands with the altar servers when they said ‘May peace be with you’, dipped my hands in the holy water, and witnessed those who had been Baptized receive the Eucharist.

Did someone ring the intruder alarm? No, and although I was reminded occasionally that I was a disguised Hindu in the midst of hundreds of Catholic Christians, I surprisingly did not feel too out of place. But not a word of Malayalam intercepted my ear, so I bowed my head to the prayer books, trying to keep up with my eyes as God was praised.

for this is my body,

which will be given up for you,”

When I looked up, it felt the same as if I were in a temple; the ladies were wearing traditional saris and English was forgone. But we were standing up in front of benches, instead of sitting on the floor, and the altar held Jesus on a Cross, and not Ganesha, Shiva, Lakshmi, and the many other garlanded Gods Hindus worship.

This was the most interesting part of experiencing Mass with Indians: as Syro-Malabar Catholics descending from ancestors converted in Kerala, their religion was Christianity, but their culture remained Indian, blended into the way they pray and how they revere God.

In front of the altar stood a cross that was distinct to their own sect of Catholicism- the Saint Thomas cross, or the Nasrani Menorah, a cross only different from the Crucifix in its adornment with Syrian encryptions and designs. The priests wore white vestments, not unlike how they would in an Anglican Church, but the tunic was longer and sweeping, woven as one whole by the Blessed Virgin Mary. Only men stood in tunics, as the corporeal gateways to Jesus, and not women.

Yet, as Briana explained to me, the nature of God to them is the same as any other Christian- God is a singular glorified body, present in heaven and earth- everywhere- at the same time. Sitting on the cold marble of a temple or in front of the puja stand at home, my mother’s chants have resounded a different essence. There is not just one God for Hindus.

But this immersion in Christianity has led me to back to the crux of my own religion, unearthing the knowledge I was once entrusted with as a child- the myriad Gods in Hinduism are all variegated forms, subsumed into one God, Brahma. He is the supreme spirit, believed to be everywhere, in everyone.

Bared down, the two religions ease the separation that I first felt, walking into the Church.

At the end of each prayer, Amen was repeated, but the pronunciation was Indian. Aa- min. Maybe that’s why I didn’t feel out of place.

Read about Thomas’s experience at a Hindu Temple here.