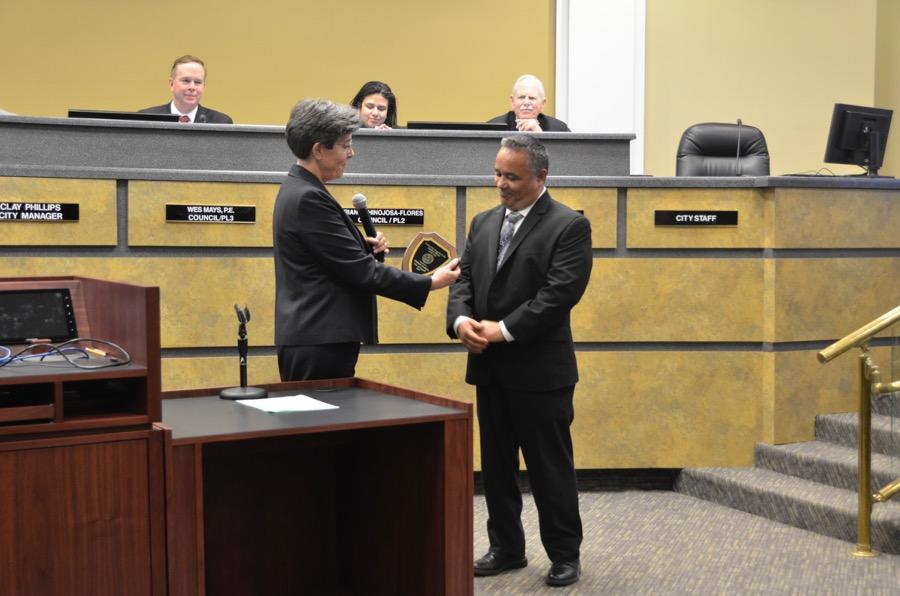 A lot of things go unnoticed in Coppell. Trash cans empty out, cracks in the sidewalks fill up and blank lots of lands become homes. The often forgotten work that drives the gears for Coppell runs in the background without even a pause to provide safety and comfort to its 40,342 residents. But this work is expected by the residents, and sometimes they forget that there are people behind it all.

Every year since 1990, the Construction Research Center, a non-profit organization at the University of Texas at Arlington, commemorates the often overlooked contributions of building officials and inspectors to towns and cities. This year, Michael Arellano, the Chief Building Official of Coppell, was bestowed with the award.

“There is a young man in this audience who we would like to honor and put on the spot this evening,” Mayor Karen Hunt said at the council meeting.

After informing the audience of the distinguished credentials and qualities – including professionalism, code knowledge and integrity – required to sweep the award, Hunt asked the room for a drumroll and faced Arellano, forgoing a handshake for a hug.

“We are so excited for you,” Hunt said. “ You have been a rock with all of the construction that has been going on, and we appreciate everything that you have done. This is just our small way of saying thank you, by re-giving this and making it a very public award.”

Arellano had already been presented with the award by the Construction Research Center, but he was grateful for the council’s commemoration.

“I’d like to thank you, mayor and City Council manager  [Clay Phillips], for the support you have provided throughout my tenure here. I have an excellent staff and I am going to miss them. This was possible because of them, so thank you,” Arellano, who is moving back to his home in New Mexico in around a week, said.

The City Council was informed of the news only a day after they got to know about the award Arellano was being given, clouding some of their excitement with sadness.

“You will be missed,” were the last words of Mayor Hunt before Arellano headed back from the podium, leaving the meeting early.

Wes Mays, a City Council member, was also grateful for all that Arellano has done for Coppell.

“He’s very active in the county and the state, and with the federal building codes,” Mays said.

The ‘codes’ tend to appear as tedious documents of legislation to the regular citizen but as Mays expressed, the codes are what make the buildings in Coppell safe to stay in.

“[Arellano] is very instrumental in reviewing all of the building codes and there’s thousands of pages of these codes. He’s one of the experts on them,” Mays said. “Now that he’s going, it’s going to be a huge loss.”

Arellano is not the first one to be recognized for his vital contributions to the sustenance of the city, however. The Parks and Recreation Department, which runs the aquatics center of Coppell, The CORE, has routinely received top ratings in the state for their services as has Coppell’s finance and accounting department.

“Unless we bring [these awards] forward in a public forum like this they’ll just go on the walls and no one will ever know about it. We bring all of those forward so that our citizens can understand what level of service our employees in the city have given,” Mays said.

Many of these workers serve the city for long periods of time and Arellano has been with Coppell as a Chief Building Official for seven years. Mayor Hunt was overwhelmed by the news that this seventh year was his going to be his last.

“I’ve not known Coppell without him. There’s a definite sadness there. I told him I wouldn’t give him a hug earlier because I thought I would be the professional mayor and shake his hand in public, but well,” mayor Karen Hunt said, referring to her previous moments of sentiment while presenting the award to Arellano.

“He is a good person and he was just great to know,” Hunt said. “He will be missed.”

Arellano’s days in Coppell have drawn to a finish, although the sturdy walls that his resilience and efforts have erected endure. Not all of the citizens residing in these walls know or remember him- but Coppell certainly will.