Pro/Con: Can you separate the art from the artist? 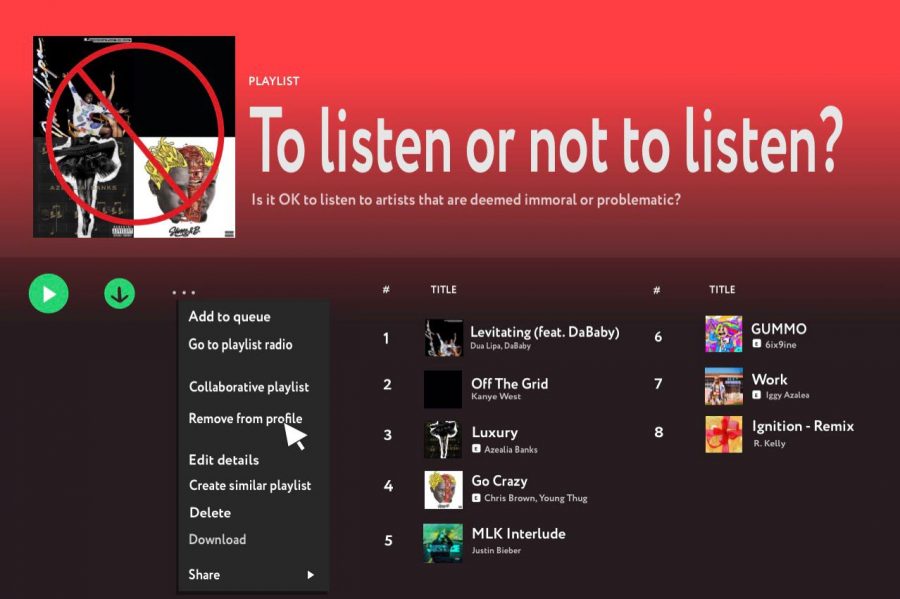 Various artists have faced scandals and backlash in their careers, but does that degrade their music as well and make it wrongful to listen to them? The Sidekick staff writer Shrayes Gunna thinks an artist’s problematic background shouldn’t prevent a person from listening to what they desire unless the content reflects the problematic stances.

Separate the art from the artist

There is one constant within each emotion I process, math problem I laboriously solve and soothing shower I take. There’s a place I visit in my most troubling times that I return to at my highest of highs.

I know, it’s paradoxical, but there’s a familiarity in its tone.

The place? The Spotify playlist that I load with the hundreds of melodies I cycle through on a daily basis.

Music is a refuge many seek: the same grounding, consistently enjoyable experience every single time. However, in the unrelenting search for the perfect song, comes the question of whether it is OK to listen artists who have been deemed problematic for several reasons: racism, homophobia, sexism, ableism or other forms of discrimination.

As social media platforms continue to forge insurrections of social activism, self-proclaimed activists continue to criticize more and more fans of celebrities for supporting a problematic artist. These situations have become the norm and rise in number with larger artists being brought into the spotlight and interrogated for actions or words that were perpetrated in the past.

For instance, DaBaby, a rapper who was beginning to pave his way in the music industry, was recently ‘canceled’ for his openly homophobic and misogynistic comments during a live performance at the Rolling Loud music festival in Miami.

The list of artists with similar stories doesn’t just end there.

And it goes on.

Though it’s not apt to reinforce the platform and the words of problematic influences within society, listening to their music for the purposes of enjoyment is unharmful.

However, in the circumstance that a song by an artist expresses harmful rhetoric or affirms the dehumanizing stances of the artist, there should be no case in which society streams and supports that work of art. When we stream and buy music, we not only affirm the lyricism and stances of the song but we amplify its reach.

Streaming music doesn’t end at listening to the song, but we consume the messages and voices of the artists and it could potentially influence us—a situation in which problematic artists can be detrimental to our character.

“Everyone takes away from the music that they listen to,” Coppell High School junior Neha Vakkadala said. “[It] depends on the person and how they perceive [the] music.”

There is one common phrase used to justify these instances that is often twisted: the notion of separating the art from the artist. Though it should be recognized that this concept is admissible, when utilized to justify streaming problematic songs it can be ignorant. Their words have taxing implications for the groups of people that are being targeted in such music.

By perpetuating notions of separating the art from the artist or that streaming has no real-world implications, we are openly negligent to the adverse effects of our actions. Although the phrase can be permissible in determining whether to stream or not to stream problematic artists, we should be cautious in streaming the problematic fruits of those artists.

There isn’t a clear line in the sand and or signage in our periphery that lets us know to refrain from streaming hurtful songs, but we should acknowledge the potential ramifications of the words we consume and the tones we allow to diffuse in our communities. 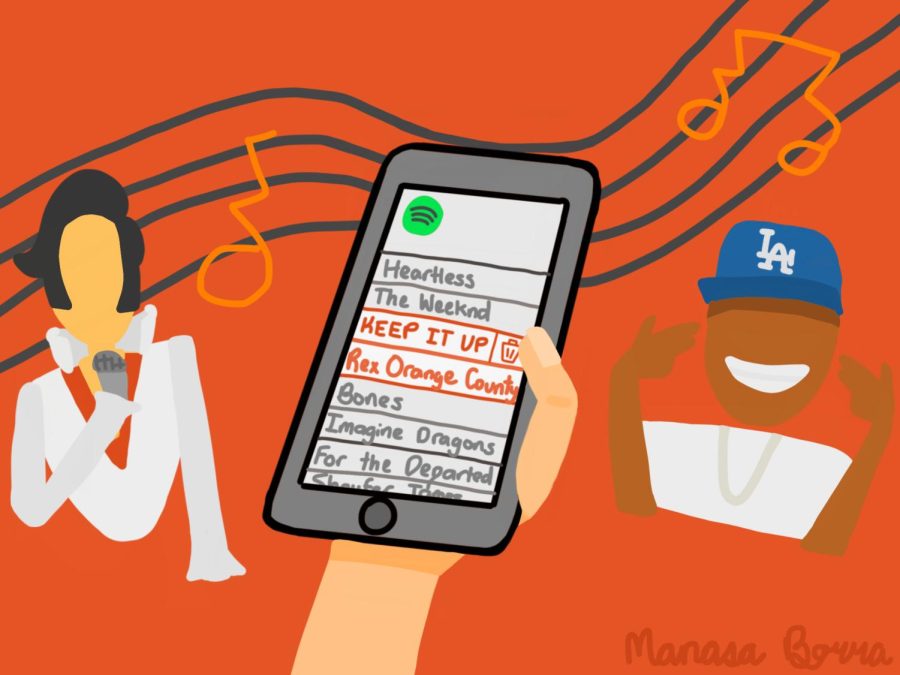 Art can’t be separated from the artist

I love a formulaic day. I find immense comfort in the ritualistic nature of an academic week and I always look forward to my after-school routine:

It was a Monday like any other on Oct. 10, when I felt the overwhelming urge to pick up my phone after a long and tiring day of sophomore year. Muscle-memory took over, and with a couple swipes and the click of a button I was transported to the realm that would occupy my brain for the next 15 minutes: my TikTok “For You” page. I scrolled past a clip of a cat meowing in a low purr and a video of a devoted ‘Swiftie’ analyzing the lyrics of Taylor Swift’s “seven” before I came across news that would thoroughly rattle me for the rest of the day:

My first reaction to this news was pure shock, but that didn’t last long before it quickly turned into unadulterated rage. Rage over the fact that the artist behind heartbreaking ballads summing up the most complex human emotions could commit a crime like this. Rage that this happened yet again to another innocent girl. Rage that this wouldn’t be the last time.

After the initial adrenaline rush, I proceeded to fall down a rabbit hole to see what more I could learn about the situation. In the midst of fellow maddened fans and outlandish conspiracy theories, a phrase kept on popping up: “Separate the art from the artist.”

This expression struck a chord with me as I began to ponder the depth of its meaning.

Is it immoral to consume the product of a ‘problematic’ creator?

Is cancel culture warranted when it comes to an artist that is publicly sexist, racist, homophobic, ableist or antisemetic?

Does one contemptible action justify the boycotting of an influential person?

Though something like streaming a song by a controversial artist may seem small, it still can support their career and, as a result, provide them with a larger platform with which they can spread a hateful message. Especially when something as serious as sexual assault is considered, continuing to abide by an abhorrent musician adversely affects victims everywhere. It pushes the narrative that their voice will go unheard, and what they are going through is insignificant.

One’s words and actions will always have implications,and musicians and influential figures have to be cognizant of the fact that what they put out will always be associated with them.

Though, this belief aligns with my own, and others may hold artists to differing levels of responsibility. The idea of separating the art from the artist is admittedly difficult to standardize.

Music has the supernatural ability to pull at heartstrings and stir emotions that no material objects can muster. When a song deeply resonates with us, its sentimental value can never truly fade. It is understandable, then, how some people maintain that continuing to consume music by problematic artists is justified.

Nevertheless, the support of artists’ music is undeniably correlated to the support of their actions, simply because listening to their music directly benefits them. There isn’t a rulebook that states “three strikes, then you’re out,” but there is a reasonable threshold of morality that public figures must abide by. Ultimately, we as listeners must be conscientious of the repercussions that may come from the music we choose to consume.

Ironically, Rex Orange County was right in one way: once an inexcusable truth is revealed about an artist, “It’s Not The Same Anymore.”