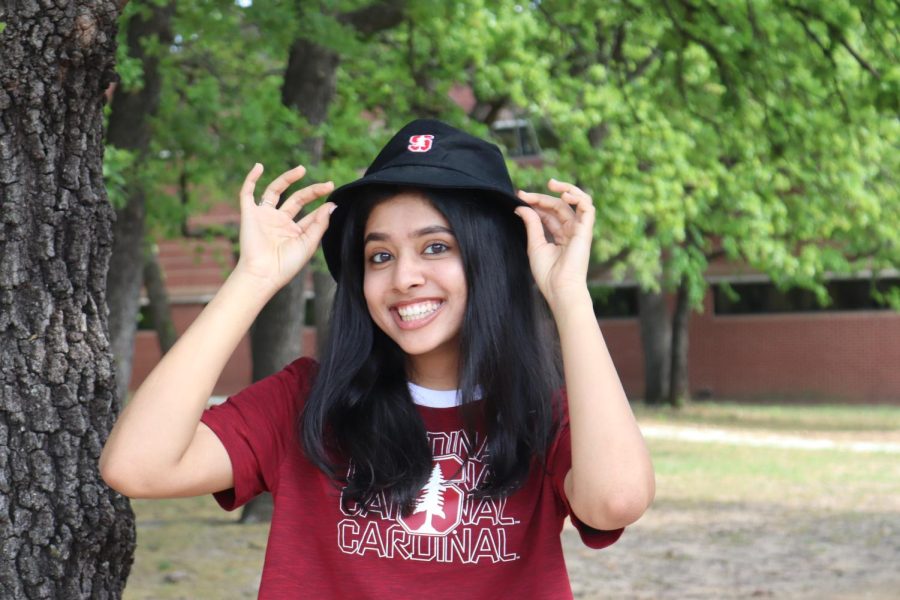 Coppell High School senior Natasha Banga is ranked No. 3 in the graduating class of 2022. Banga will attend Stanford University in the fall and major in public policy and computer science while pursuing the pre medicine track.

What does it mean to you to be in the top 10? When I first got into high school, being in the top 10 wasn’t my goal. My goal was just “ I want a certain grade in these classes” like in sciences. I wanted to learn, I tried not to put a ton of pressure on myself to get a good rank. I didn’t really expect to be ranked as heavy as I was. When I found out, it was a mixture of emotions primarily it was being pleasantly surprised.

What’s your advice for younger students?

The first thing is going to be super generic but super effective, being able to manage your time and prioritize what’s important, and that’s something that we’re not always able to do. It’s very difficult to recognize, sometimes you have to make decisions in terms of what to prioritize. For me, I was bent over the last couple of years in high school, I’ve been involved in a lot of extracurricular activities, from debate to piano, dance and research and then simultaneously also wanting to, max all my classes and do all of this stuff. Putting school first is what I always did. For example, studying for a test for a certain time frame and then moving on to my debate prep of whatever I had to do for the day. That’s number one. Number two, I would say is a mental thing because I think half the battle is really just how you view things. I think pressuring yourself from the get-go to be like, “I need a 97 and above in every single class and that is the only thing that is going to let me succeed in life” is just a really bad mindset to have because inevitably you’re going to mess up somewhere [because] there’s going to be off days. You just recognize that it’s not the end of the world and I think I always had that approach going into this is just kind of trying to stay relaxed. The other thing is surrounding myself with the right people. I think a lot of my friend group is in the top 10. We all kind of push each other and that can be good and it can be bad. Overall, I think it has a benefit and that we were supporting one another.

What’s something you wish you told your ninth–grade self?

I think back in ninth grade, I was still navigating high school so, I did pressure myself quite a bit. For me, the transition from middle school to high school was a little rough. I think just because I was adjusting to just the rigor of the classes and also wasn’t as good at managing school and extracurriculars. But between middle school and high school, the workload outside of school exponentially increased. I think freshman year me could have done a better job, maybe managing time but then simultaneously giving myself the opportunity to relax a little bit. I would have forged more connections with more people, but I don’t regret any of my decisions in the last few years.

What’s your most memorable part of high school?

It would have to be senior year. First semester was obviously a little bit stressful with college apps, but after getting into college in December it was better. The tension kind of dropped and I was able to, this January and onwards, revisit a lot of passion projects and stuff that I had that I couldn’t really get to in the past couple of years. Especially with COVID-19, I was really in a state where I was focused on school work and going to debate tournaments that I didn’t really text my friends as often as I could. The memorable part of this year was reconnecting with friends, hanging out with them on weekends, not just on weekends, but in school itself. Even just the little  moments during passing periods when they’re just walking from class to class.

What are your thoughts on the current education system and the college admissions process?

I think the admission system is flawed in some ways, but also they take metrics that they can take – colleges have an objective which is to admit students and make money through tuition. This is the system that satisfies their goals.  Points of improvement for the admission system in terms of more qualitative metrics of assessing applicants, such as essays. In terms of getting access to more preparation courses, grades and tests and all of that are ways to level the playing field in that way, obviously taking into account household income. I do think those objective measures should still remain important in the process because essays can be a good indicator of an individual and whether they’re a good fit for the university. I personally don’t really agree with that idea. I put a lot of effort and time into my Stanford essays and I think I was really able to show the components of my personality and whatever I wanted to demonstrate paid off. I view that aspect of the admissions process as valid now. What I do think has been really interesting is that a lot of my friends who are super talented, academically, have been admitted at more selective instructions and rejected or waitlisted at a lower ranked institution.

What are your goals for the future? And how do you think your hard work will contribute to that?

I’m going to be doing a combination of a few different things. I am on the pre-medicine track, I would like to be a doctor in the future. But that’s long term in terms of what I want to do at Stanford specifically. I want to study computer science and public policy. Public policy is something that I’ve been involved with since seventh grade in terms of debate. I think it’s really fascinating to think about how government officials strategize the best policies to maximize satisfaction and social well being. The issues with getting these policies implemented and specifically in the context of medicine and public health which we’ve seen is so important with the pandemic. I’ve been doing some sort of computer science language since middle school but taking a peek inside this year with [AP computer science teacher] Mr. Finnegan was one of the reasons I definitely chose to realize my interest in that area. I know it has many academic benefits even as a doctor and like with research and genomics research specifically.

In terms of what speciality I want to go into, I started off wanting to do pediatric interventional cardiology and I explored neuroscience and did some research in that area. I definitely want to continue doing some research in neurology psychiatry during undergraduate. We’ll kind of see where that goes obviously in medical school.

What’s your secret to success?

I think number one is just work ethic or really recognizing it’s all about a mindset. For me, going into it recognizing academics matters to a certain extent with college long term and just building good study habits. There are downsides to this like the lack of sleep but you have to find a balance. I think there are some classes you are going to take in high school that can be real GPA sinkers that are really tough and are known to be tough. I would say for me it was like AP physics and AP chemistry. But again it shouldn’t be like hope is lost, this class is hard, everyone knows that. You should still acknowledge that getting help and building relationships with teachers is important. I think it was really important for me because a lot of people look for resources online or talk to friends. I did some pure studying in high school, but not as much as I think other people did personally. I think I’m more of an independent studying person and so that’s what worked for me and then I was able to talk to teachers and get help from them. A lot of people don’t want to go tutoring, but I think tutoring is something that is for everyone. It doesn’t matter where you are, where on the grade scale you might be in that class.

What’s the hardest lesson you had to learn during high school?

Personally, I think I’m a pretty laid back person and I’ll set goals and make an effort to achieve them, but then there’s going to be people you surround yourself with and a lot of competition,  when some of my closest friends are some of the highest achievers in the school. That can change your mindset to strive for perfection and compare yourself to other people and I still do, it’s something very human, natural. I think I really learned that you can’t necessarily strive for this golden standard and constantly compare yourself to other people because you don’t know other people in terms of their accomplishments.

How did you stay motivated and what was your motivation throughout high school?

I have always been like an inherently competitive person. In terms of ranks that have always interested me to do well, I never thought like I have to be number one or I have to be valedictorian. Being surrounded by a competitive environment just inherently motivates me. I don’t think there was ever a time where I was like, “I’m done. I’m giving up on my grades,” because inherently the people who surround me, not just my friends but also my family and whatnot have always encouraged me to do my best.

How much effort did you put into studying after school?

I would spend a few hours each day working on homework and then also catching up on the weekends. I think one of the toughest things was on Friday nights when we’d have assignments due at midnight and then I would also have a debate tournament that same day. I’d be competing and then also scrambling to finish my homework by that midnight deadline. It was several hours of work on weekdays and then also on weekends. On Saturdays, I was always debating and I really had to take advantage of my time on Sundays and that often overlapped with family arrangements, but we had to make it work. In a way balancing extracurriculars was a good thing because it would give me time to step away from my work and look into something else. I really love researching for debate or speaking with people on calls for the Red Cross, it’s all lots of fun.