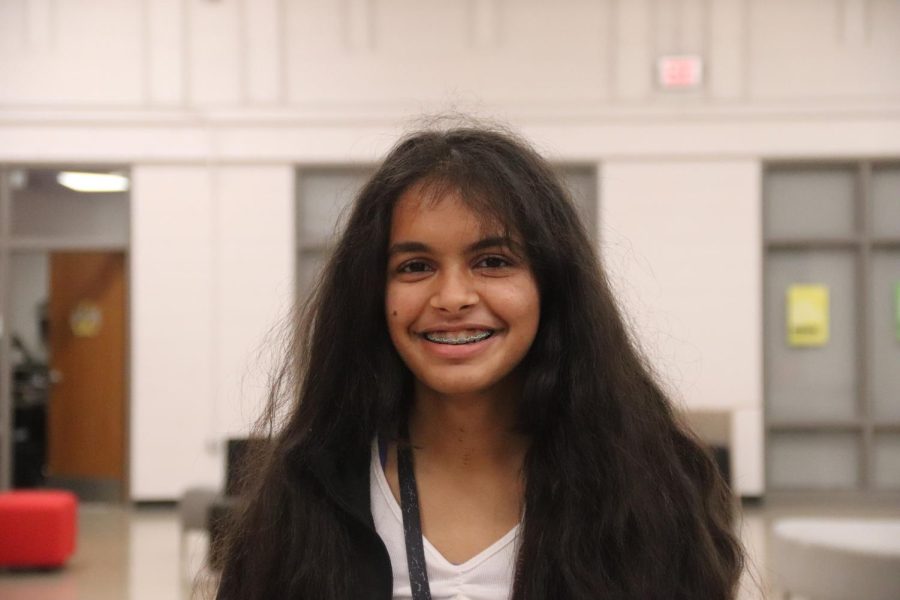 CHS9 student council president Myiesha Sharma uses her leadership skills to bring back traditions and help student council members bond. Sharma’s main focuses this year are to have an inclusive environment and to increase school spirit.

With all students coming back to campus this year, CHS9 Student Council is back to bring excitement and create bonds among students. With the hope of making changes, CHS9 student Myiesha Sharma becomes the president of the 2021-22 CHS9 Student Council.

How did you become the president of the CHS9 Student Council?

We had a vote back in October, and my competitors were great, but I got the majority of the votes and ended up getting the role. I like to think that it was really my video that got me that position, because I tried to incorporate as much humor in it as possible.

What are some extracurricular activities that you are a part of?

Aside from student council, I am a part of the debate team. I compete in tournaments sometimes. I also like to volunteer at various places. [DFW Hindu Temple] is the place where they teach religion classes, and they have a lot in store for the younger kids. They have this entire learning thing for kids, so sometimes they need volunteers to teach. I normally just like to help out, because I really enjoy leadership positions and I also enjoy kids. I’m also a member of the treble B choir. Our concert on Dec. 2, 2021, was very fun because all of the students came together, we all sang this masterpiece and it sounded so pretty, and it was really fun to be a part of something. I enjoy really collaborative activities. I also like hanging out with my friends and sometimes going to get boba tea.

What image do you want for CHS9?

I want CHS9 to be an area where there’s no judgment, and everybody’s really collaborative, [and] gets along really well and all feel comfortable about themselves and with each other.

What past experience do you have with student council?

I was a part of the student council in eighth grade at Coppell Middle School East. Because of COVID[-19], we weren’t really able to do much or implement as much of an impact in the school [last year]. This year, everyone is going back to school, and we don’t have the online version anymore.

What are the plans for CHS9 Student Council this year?

There has been a lot of difficulty adjusting and the beginning of the year was really different. We had a thing called the ‘Thankful Tree’ where everybody wrote on the leaf what they were grateful for. What we had planned can help people get together and socialize and find places where everyone can get along and bond over an activity. One of the main focuses this year is to have everybody really find time to get along with each other and increase school spirit.

How has becoming the president of CHS9 Student Council helped develop your personality?

In the beginning of when I got the position, I really didn’t think that much about it. But then, after the first meeting, I was told that we had to give meetings in front of the entire CHS9 Student Council at least once a month, and we have about 100 members. It was really scary at first because I really enjoy putting myself out there but just the idea of speaking in front of that many people in that large of a crowd was something I’d never really done before. The first meeting was rough. But after some practice on my part, and just a little bit of more mental preparation, I really became a lot more confident in myself. The amount of passion each and every one of the members has really makes CHS9 student council a super fun environment, because it’s exactly what I had in mind when I applied for the role.

How did you feel when you were elected to your position?

I was very happy. To be honest, it was a little unexpected. I ran [for the position] because there were a lot of ideas I had that I was willing to implement, but I didn’t really think I would get the role. I mostly just ran because if I didn’t, I would regret it. I was very shocked when I got the position and was excited to implement the change that I had in mind.

What environment do you want CHS9 Student Council to have?

If there is one thing you can tell the readers, what would it be?

I would like to say that if you feel like what you’re doing is to make a change, or if there’s something that you want to do, keep going with it. Because if you stop, then the impact that you are making wouldn’t be there and that’s something you wouldn’t want to miss out on. You only live once, so you shouldn’t really live with any regrets.

At [Lakeside Elementary School], I really wasn’t big on the student council. I didn’t want to participate in it because I didn’t feel good enough for it and I wasn’t as confident enough to participate in it. In middle school, I decided to give it a shot but we had these applications that you had to fill out, and then the sponsor would decide who gets in the student council. In sixth grade, my application got rejected. I tried again in eighth grade, and I got in. It was [the] COVID-19 year so we tried our best, but there wasn’t really much we could do. I was determined to try to at least participate this year and after [CHS9 Student Council sponsor Annie Fillers] explained about officer positions, I was really thinking about all of the missed opportunities that we had last year, and all the ideas I didn’t really get to put on the table last year. So I decided to run for an officer position to see just because I didn’t want to regret not doing that. And I was very shocked when I did get it.