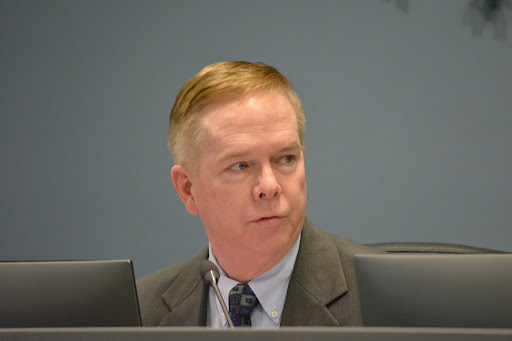 Coppell Mayor Wes Mayz has served on the city council since 2012. Mays was elected as mayor of Coppell last May. Photo by Ashley Qian

Before being elected to city council in 2012, Coppell Mayor West Mays was president of two homeowner associations; his background exposed him to city politics allowing him to succeed in his position.

What is something you had to consider when moving from council member to mayor?

Being mayor is actually very different [from] being on the city council. The mayor doesn’t have a vote, so the mayor’s job is more of a management job; it’s learning to work with the council to make sure that the council makes a decision. In fact, the [former Mayor Karen Hunt] had told me the hardest thing about being  mayor is realizing that your job is no longer to make a decision, but your job is to make sure that a decision is made.

What prior experience as a professional help you as mayor?

I’m an electrical engineer by training and I’ve been managing groups of people for close to 25 years. The professional side of learning how to handle human dynamics was a big part of [my background]. The government side is very different than being in a company, being industrial, but being exposed to the city government for nine years on the city council [prepared me for] what I was getting into in terms of the city government. I knew how to manage the people, so the two fit together very well.

Did you have any thoughts of being a council member when you were younger?

My dad was a city councilman in the city that I grew up in [Smithville, Texas], and I didn’t really think anything of it; it was just what he did. I can’t say that it motivated me one way or the other, but I’ve always been active in the community. [My wife and I] were active when [our] kids were in school with the school district [and] the band. I’m also a member of the Lions Club and a member of the Coppell A&M club for 20 years now; so it was a natural migration to participate in the city government.

My advice is keep an open mind, ask questions and be prepared to learn. Operating the city government is different [from] the things that most of us have ever done; you have to be willing to learn how the city operates and how government accounting works. Government accounting is different in a lot of ways and it can get very confusing when you first are exposed to it, so be willing to ask questions and learn from your mistakes and from others.

What are your legislative priorities?

Well, my priorities may be a little bit different than the city in general. We’ve got a number of items that we’re working on.

How has COVID-19 issues and protocols impacted the city council?

What was really impactful was the city of Coppell provided services for our citizens and [continued] to provide those services to our citizens all through COVID-19. We were really impacted in the areas that would require people to be present: the library, the CORE, the Senior Center. We had to either cut those back, reduce the hours or suspend their operation.