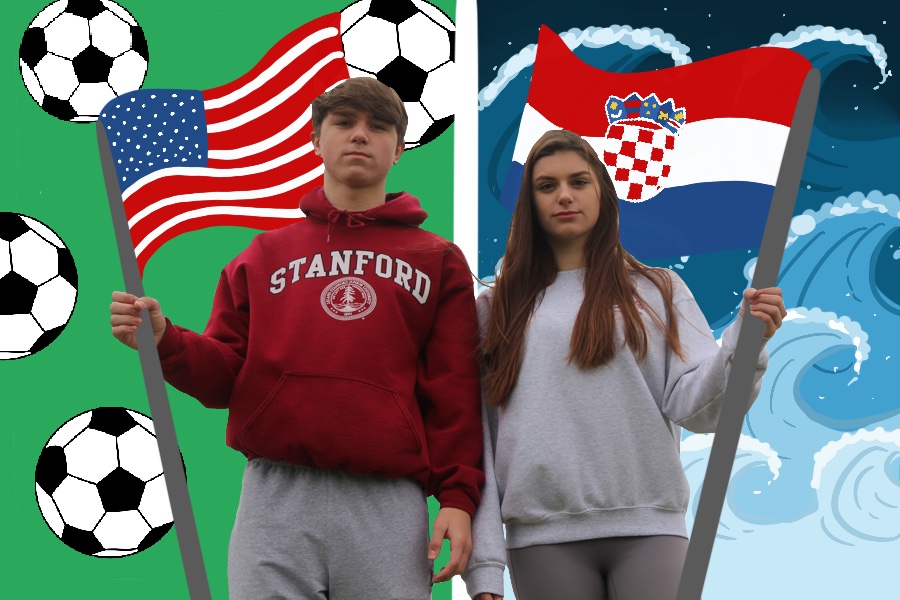 CHS9 student Nicolas Radicic and New Tech High @ Coppell senior AnaMarija Radicic came to Coppell after living in Croatia for nine years. Nicolas is a center midfielder for the varsity soccer team and AnaMarija is the captain of the varsity swim team.

Chasing dreams from Croatia to Coppell

Flourishing on varsity with 14 years experience 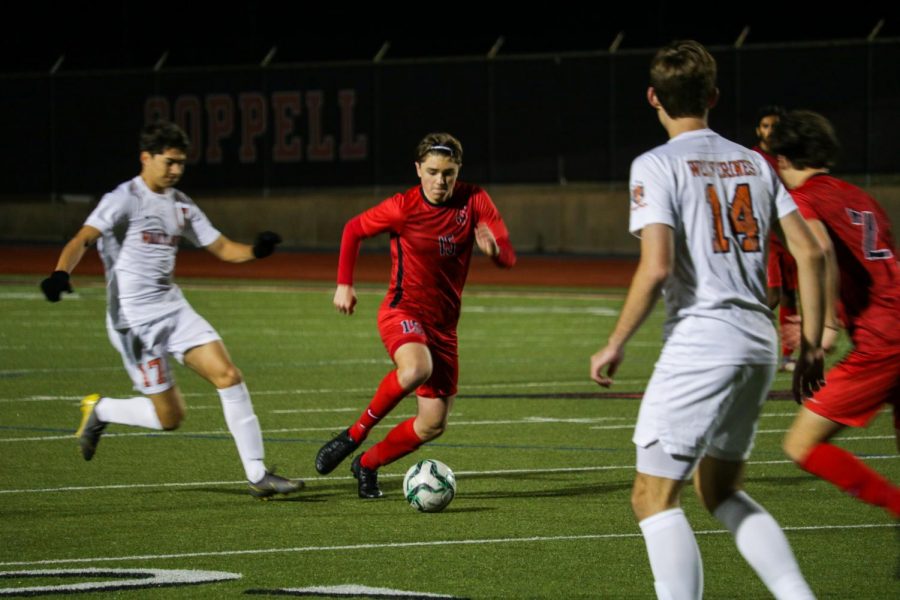 Coppell freshman center midfielder Nicolas Radicic passes during the scrimmage against Frisco Wakeland on Dec. 12 at Buddy Echols Field. After playing soccer for 14 years, Radicic is one of two freshmen on the varsity team.

As an 18-month-old crawling with a soccer ball in Mommy and Me class to a center midfielder on varsity, Coppell freshman Nicolas Radicic has been immersed in soccer for as long as he can remember.

Growing up learning how to play soccer in Croatia, Nicolas was part of a professional youth system and only played with others in his age group. While exposed to professional coaches, training and players, Radicic never truly experienced being on a team with those older than him. As one of two freshmen on varsity soccer at Coppell, Nicolas had to adjust to the new environment.

“Playing with the older guys, I’m learning more things through them,” Nicolas said. “Playing with others my age, I never saw how much more I could improve and would be fine with where I was. But on the [Coppell] team, some of the guys are better than me, and I want to prove myself to the coach. It makes me want to work harder, play harder.”

Despite being younger than almost all his teammates, the age gap does not make Nicolas afraid of playing his best and pushing others to do the same.

“As a freshman, he comes in not necessarily nervous or afraid to step on anybody’s toes,” Coppell coach James Balcom said. “Because he’s trained at high levels, he sees we’re here for one purpose: to get the team better. He knows it’s about all being high-level players, training together and getting better together regardless of what grade he’s in.”

The decision to move from Croatia to America in 2016 stems from greater opportunity and a more hopeful future for him and his sister, AnaMarija Radicic.

“Opportunities in the [United States] versus opportunities in Croatia are not even comparable,” Nicolas’s mother Vesna Radicic said. “Croatia is a beautiful country but very politically damaged, economically damaged and corrupted. We knew that was not the place for [AnaMarija and Nicolas] to build their future. We as parents wanted to give them the most we can.”

For Nicolas, transitioning from Croatia to Coppell was not much of a struggle due to his frequent trips to the United States while living in Croatia and his naturally outgoing personality.

“Nicolas is a happy, happy fellow,” Mrs. Radicic said. “He will find the good in anything. He loves people and adores soccer. Nicolas is the type of kid who goes into a room and comes in front of everybody and says, ‘Hey guys, I’m Nicolas. I want to play, who wants to play?’”

Playing on varsity has allowed Nicolas to more than just increase his soccer skills, but has also given him lifelong lessons and a family he can always count on.

“I’ve learned so much through soccer with my friends on the team,” Nicolas said. “I now know how to persevere through things. I can’t think everything will go on by itself; I have to work hard for the things that I want and just keep on moving and going forward. With the guys on the team, I’ve really become one of them, and we’re just like a family now.”

Playing center midfielder or center back, Nicolas does most of the talking on the field, telling his teammates what to do and where to go. In his later years on the team, his leadership role will only increase.

“It’s tough to come in as a freshman and assert yourself as a leader of the group,” Balcom said. “But when [Nicolas] does speak up and want to lead, everybody’s going to follow. We see that at CHS9 already, and a lot of freshmen look up to him. And in the next few years, he’ll step up even more as a leader.” 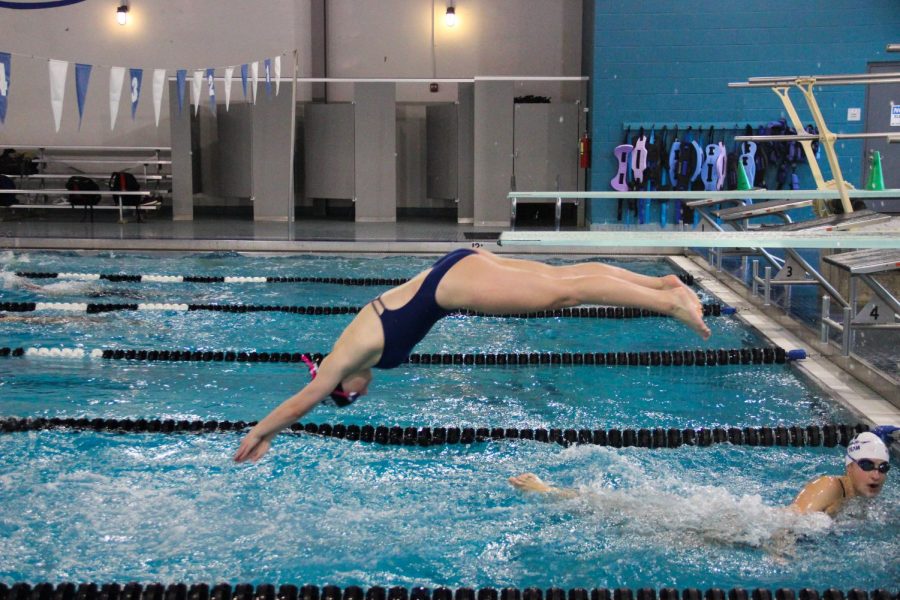 New Tech High @ Coppell senior AnaMarija Radicic dives at practice at the Coppell YMCA on Jan. 24. Coming from Croatia after living there for nine years, Radicic adjusted to her new environment and is now a captain of the varsity swim team.

For AnaMarija, this is the cross section of two very prominent aspects of her life: her Croatian background and living there for nine years, along with her position as a team captain on Coppell’s varsity swim team.

Though she started swimming in first grade, AnaMarija only started taking the sport seriously once she started swimming with Coppell after moving to Texas before her freshman year.
“I always liked the sport, but my passion just grew over time,” AnaMarija said. “In Croatia, I wasn’t really competitive, so I wasn’t learning or improving much. I was just swimming to swim, but when I got here with [Coppell swim coach Marieke Mastebroek], she’s amazing with technique work, so I improved a lot.”

AnaMarija’s steep learning curve caused her to go from being a freshman on JV for one semester to a senior varsity swim captain.

“From when she first got here to now, she became super competitive and a huge role model to where she’s the hardest worker in the girls group,” Mastebroek said. “I didn’t initially pick her as a captain, but she’s been so intense and so on top of her swimming, and now is really one of the best girls on the team. She went from being one of the slowest girls on the team to one of the fastest. It’s a complete transformation, and it’s really impressive what she’s done.”

Born in Palo Alto, Calif. before moving to Croatia in 2007 and back to the United States in 2016, AnaMarija didn’t struggle with a language barrier when first coming to Coppell. However, moving right before the start of high school still presented itself with challenges regarding developing new friendships and relationships.

“After finishing eight years of school in Croatia, she already had strong relationships, so [adjusting] was hard for her,” AnaMarija’s mom, Vesna Radicic, said. “But she really found her friends on the swim team. Those are the people who share the same love for the pool, for water as her. When you share the same love from the start, it’s much easier to make friends.”

More than just giving her a sense of family and camaraderie, the swim team fosters an environment where each swimmer is pushing each other and constantly seeking improvement.

“My teammates and coach are always pushing me to do better,” AnaMarija said. “Being in an environment where everyone is competitive and working on themselves to get better makes me want to work on myself and get better results.”

After swimming with the team for her fourth season, AnaMarija has gained more than just faster times and better technique.

“I’ve learned so much persistence because without that, you can’t survive,” AnaMarija said. “I’ve gained that mental strength of pushing myself; when my body fails, I need to push through. Sometimes in swim, I have to push as much as I can until I basically can’t breathe anymore, but I have to stay strong and push through it.”

Her dedication and willpower stem not only from the competitive swim environment, but her personal background as well.

“Being from Croatia, there’s a certain toughness in that culture that is also in her,” Mastebroek said. “I see that also in her family. She’s mentally quite strong and has a great attitude. She’s grown into quite the leader, and she’s become a real strong individual.”