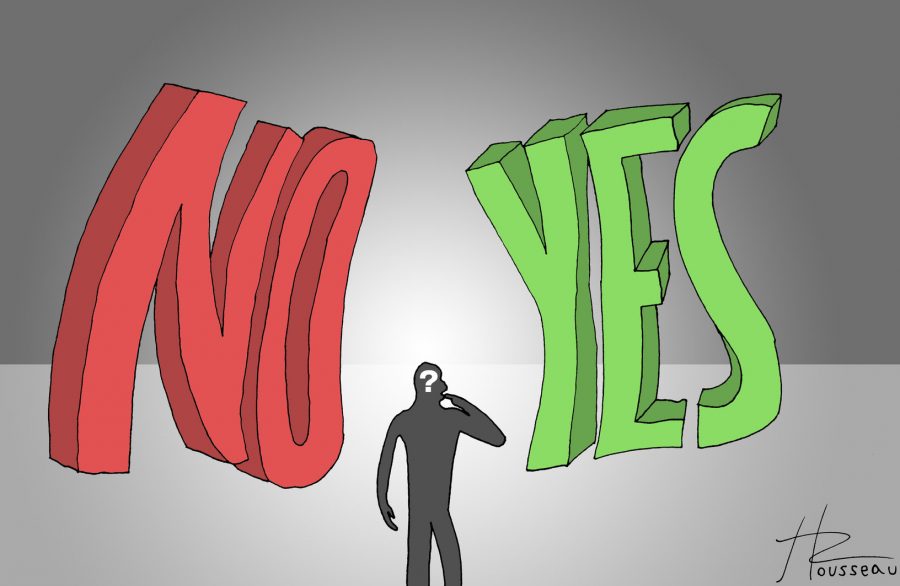 Balancing yes or no

Combatting the overuse of one word

We all know, and are very familiar with, the words ‘yes’ and ‘no’. In fact, for most of us, these were probably some of the first words we learned how to say.

The literal meaning of ‘yes’ is defined as affirmatory response and ‘no’, as a negative response.

From the surface, these words seem simple enough. But why then are we always being told of the power of yes, or the life changing effects of no? How do these so called ‘magical words’ leave such an indelible impact on our lives?

The word ‘yes’ can be used in an infinite number of situations, whether it is agreeing with someone, approving something, or just expressing a positive statement. This word is usually associated with a more optimistic, upbeat individual.

Those who say yes are deemed adventurous, unafraid to take risks and open up doors to completely different, unexpected situations. People who say yes are purportedly kind and agreeable individuals that you are inclined to befriend.

TV Producer Shonda Rhimes decided to say yes to everything for an entire year and came out a new person.

“The very act of doing the thing that scared me undid the fear,” Rhimes said. “Yes changed my life. Yes changed me.”

On the opposite side of the spectrum, the word ‘no’ is seen as something people say to reject, disagree or produce a negative response.

People who say no are seen as cynical, pessimistic individuals. Saying no is associated with closing yourself off from others, too afraid to take new risks or go outside of your comfort zone.

In today’s world, so many people harp on the value of these words and how to implement them into our lives.

Depending on the situation, these words can have a value so shallow as agreeing to pick up your brother from soccer practice, or as drastic as agreeing to a new job across the country. Placing one on a higher pedestal than the other is not only impossible, but quite dangerous. By overestimating the value of one word, we neglect the other, finding ourselves a whole different predicament.

That old adage, ‘too much of anything is bad’ holds true in this situation. Rather than forcing ourselves to agree, disagree, accept or reject, we should focus on what we truly want to do.

While there are so many amazing outcomes that can come from ‘yes’, there are equally just as many that come from saying no.

The benefits behind both of these words combine to create harmony in people’s lives. Yes is seen as leading people to new opportunities, experiences and relationships. But who is to say no cannot?

At the same time, ‘no’ is viewed as a way for people to become self-aware, drawing the line at the appropriate time. Just as before, these benefits are not just limited to saying no.

Finding that balance between yes and no is key, and it means something different for everyone.

In my case, I have a tendency to be a people pleaser, always saying yes to help out others. While this has its obvious benefits, taking on the task of another is sometimes done at the expense of myself. Finding this balance between ‘yes’ and ‘no’ means learning how to say no more often as to not overwork and overburden myself.

Questions, decisions and choices can be overwhelming, but rather than relying on one tried-and-true response, it is okay to take a new approach to situations. You may just be surprised what the outcome may be.