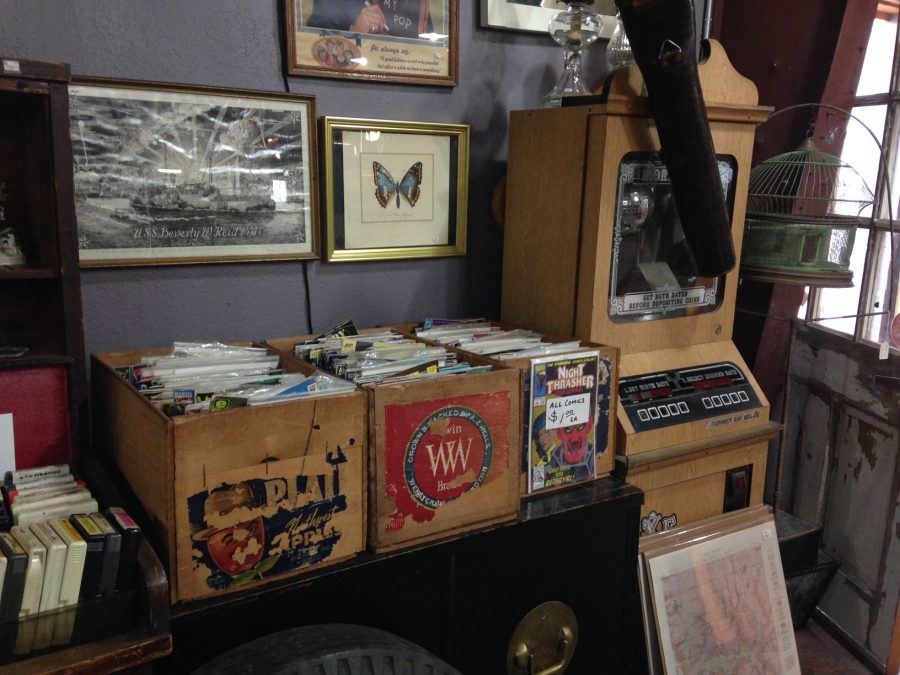 ‘One man’s trash is another man’s treasure’

Questionable odors, grimy floors and overflowing shelves may be some of the stigmas that come to mind when thinking of thrift stores and vintage items. Nowadays, however, teens are proving these stereotypes wrong with their newfound interest in antiquated items.

Polaroid cameras, record players and typewriters are just some of the many items that have become popular among teenagers lately. Thrift and vintage stores are a haven when on the hunt for antiques like these, as they are homes to all sorts of unique items.

Antiques aren’t the only items that have resurfaced recently. Conveniently, many of today’s trendy pieces can be found in places as close as your parents closet.

Recently, past fashion trends have resurfaced, making it stylish to dress in ways similar to those of your parents or even grandparents. High tops, overalls and high waisted jeans are commonplace at school, with accessories such as scrunchies and chokers also making an appearance.

Pop culture has played a big role in the revival of seemingly ancient items. From jukeboxes to vinyls, many antiques have become popular once again due to the influence of celebrities, movies, and other forms of media.

“The show ‘Mad Men’ really helped the typewriter sales,” said Robert Owen, owner of M’Antiques, an antique store in Bishop Arts District. “Especially with the generation up to about 35 [years old].”

While antiques may just as easily be purchased at the store or on Amazon, there is nothing like rummaging through piles of relics until finding that sought after item.

When I was young, I stumbled upon a box in our study and, overcome by curiosity, began unpacking it. Inside, I found a Spectra Polaroid Camera, with a broken flash and tattered wrist strap. I immediately began taking pictures of everything in sight, fascinated by the images captured immediately onto film. It was magical.

My parents caught onto my interest, showing me pictures that they used to take on the camera. This was such a cool experience for me, looking at how my parents had captured memories in ways so different than we do today on digital cameras.

Discovering old items can create new hobbies. A record player could insight an interest in different music styles. A typewriter could encourage you to begin writing.

It seems like there is always something bigger and better around the corner, leaving perfectly functional items in the dust. Making use of old items encourages people to reuse items, rather than get rid of them.

Vintage items can be repurposed, with their owners finding their functionality in alternative ways. Crates once used for Coca-Cola becoming decorative planters, vinyl cases turning into wall art, and birdcages becoming candle holders are just some of the ways that antiques can be repurposed. Finding new ways to recover old items is truly an art, and it is a creative outlet for many.