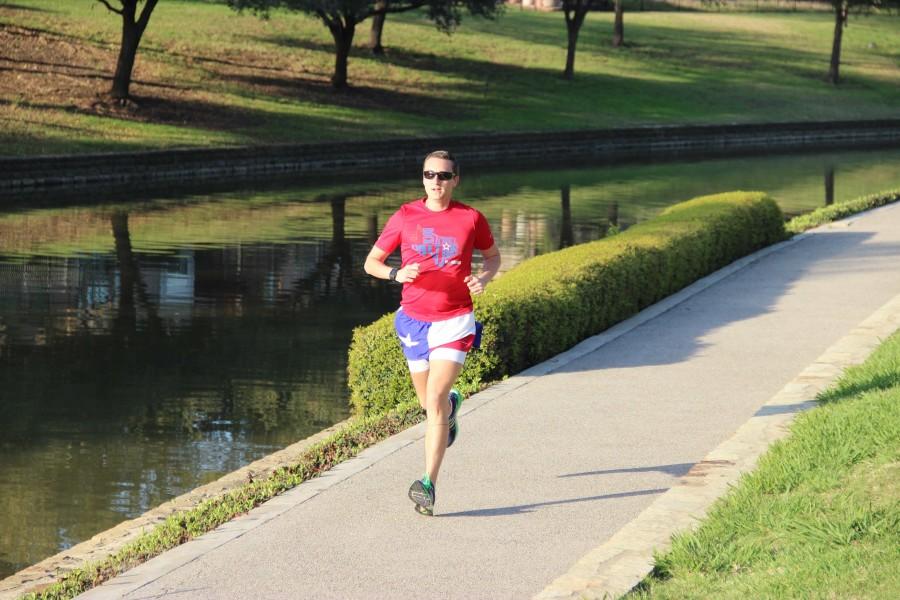 Disney World, on a normal night, would be deserted at 3:30 a.m. Sprinting past the vivid lights, thrilling roller coasters and enthusiastic characters, it clearly is not. Though the park is still closed, you and thousands of other participants are getting to see a whole other side to Disney World.

Hours later, the park is crowded, filled with people cheering you on. Despite the burning in your legs, you run on through each of Disney’s four parks, then return to your starting point in Epcot to end the race.

Each year, the “Dopey Challenge” takes runners from all over the world on a 48.6 mile tour of Disney World. To complete the challenge, participants must run a 5K, 10K, half-marathon, and marathon within the span of four days.

This past January, Coppell High School AP Human Geography teacher Ryan Simpson became one of the few people to have finished all four parts of the race.

“The day it opens online for registration, you have to sign up, because it fills up in about four hours,” Simpson said. “There are only about 8,000 spots in the world.”

Although thrilled to have been chosen initially, Simpson knew how much work he had to put into the race to have the endurance it would take.

“I was super pumped for a while, but after that I was like, ‘OK, it’s time to get to work’,” Simpson said. “So I was excited, looking forward to it, but still starting to get focused and determined. You’ve got to be committed, because there’s no refund at all.”

Simpson put hours each week into training, while still balancing work and other activities.

“It’s sometimes hard to run during the week, especially with work, so I go to the gym early on Tuesday and Thursday mornings,” Simpson said. “I get up at 4:30, do a workout, and then I run at least a mile. I do my longer runs on the weekend, ranging from an easy five miles to a full twenty miles.”

Before long, it was time for the first day of the race.

“Pre-run, I was feeling cranky, because I had to get up at 3:30 all four days,” Simpson said. ”Depending on the weather, it was either really cold or really hot, and there was one day it was raining the whole day. And the day of the marathon there was 99 percent humidity, so it was super hot. During, it was excitement and then ‘why am I doing this to myself?’ And at the end, it’s like ‘I totally just did that’.”

The 5K and the 10K both take place in Epcot, beginning and ending before the park opens.

“There’s nobody in the park but runners, and they have all the lights on, all the music blaring super super
loud,” Simpson said. “You get to run around everything in Epcot including the big ball, and there are characters every mile that you can stop and take pictures with.

The half marathon starts at Epcot, goes through Cinderella’s castle in the Magic Kingdom, and finishes back in Epcot. Finally is the full marathon, a 26.2 mile race through all regions of the theme park.

“The full marathon starts at Epcot,” Simpson said. “You run through the castle again, do a full mile in the Magic Kingdom, then go through basically nowhere until you get to Animal Kingdom. You get to run through the safari; they have some of the animals out where you can pet them. At Animal Kingdom they had a roller coaster open, so you could just go get on at the halfway point and then start running again.”

The race continues, taking runners through the ESPN Wide World of Sports and Hollywood Studios. Again, the finish line is in Epcot.

During the half-marathon and marathon, people line up to encourage the runners. During the full marathon’s final lap through Epcot, spectators must reserve seats to watch their runner complete the race.

“When you have those crowds there, they push you farther,” Simpson said. “They had people all over the place. They have this thing called the chEAR squad. They get to watch their runner throughout the race, and have reserved seating at the end. They get all kinds of cool perks that don’t involve running.”

For Simpson, running is about reaching goals and beating personal bests, rather than outpacing other people. Still, running at Disney is more about the experience than the speed.

“I try to beat my personal record every time, which I did at the Dallas Marathon – I beat it by 20 minutes – but at Disney World it’s four straight days so it’s more about endurance than speed,” Simpson said. “I have to make sure I have enough energy to get all the way through the race. It’s completely different from normal running- it’s more of an experience than a normal run.”

Although Simpson completed the “Dopey Challenge” by himself, his friends still offer him support and encouragement.

“I push him to keep going when he wants to stop,” said friend and fellow runner Liz Baker. “The first time he did a marathon, he hit a runner’s wall. Now he’s improved, especially after the first one. And he’s still going, three years later. He has drive and determination and stubbornness, especially since [the “Dopey Challenge”] isn’t something you can just get up and do one day. You have to have a strong mind.”

Simpson has learned a lot about himself through the “Dopey Challenge” and other races.

“As a person, it shows that you can accomplish goals you set, if you’re willing to put forth the work for it,” Simpson said. “It’s something I do with my students; I get them involved and tell them about my runs, and anytime I do a distance run I bring my medal in, so the kids can see it. It shows that there are rewards for setting goals. That’s me as a person. Set a goal, then figure out the best way to reach that goal through small increments.”

Although he reached his goal to run in the “Dopey Challenge” this year, Simpson is already setting goals for the future.

“One of my big goals in the New York marathon, and I want to get in the lottery system for that. Doing marathons in other locations is my next goal. Like New York, maybe London or Paris, take it international.”

Along with his plans to run in different locations, Simpson also plans to do the “Dopey Challenge” again in 2018. He hopes his family can come to watch, including his nephew, who will be four at the next Disney run.

Simpson only recently became a runner, having been strongly opposed to the idea in previous years.

“About three years ago, I had a birthday party out on the patio of a restaurant,” friend Beverly Kiefner said. “Mr. Simpson came and all my running friends are sitting around and talking about running. And one of my friends looks at Mr. Simpson and asks if he’s a runner. And Mr. Simpson says, ‘I will never be a runner. I do not run.’ By the end of the year, we were running and training together. We support each other.”

Although not a fan of running initially, Simpson now looks to running as a break from the chaos of every-day life.

“Running gives me this time to decompress, and pull everything from my mind, whether it’s work or home or anything, just zone out,” Simpson said. “It’s how I focus myself, especially after a long week.”

A lot has changed since Simpson ran his first marathon, from his overall endurance to his level of confidence.

“He has gained the confidence to train on his own, which is not easy to do,” Kiefner said. “To motivate yourself and go out and go on long runs every weekend. The confidence to be able to finish a marathon on your own. It’s a lot easier when you’ve got your running buddies with you, but he did this last one all by himself. He’s a lot faster for a lot longer distance now.”

Overall, running has helped Simpson develop characteristics that have carried over into every aspect of his life.

“He’s determined,” Kiefner said. “When he says he’s going to do something, he does it. You have to be like that if you’re going to be a distance runner because it’s easy to quit. He’s motivated me, too. He somehow helps me like if I’m grumpy at mile twenty – he’ll dance or he’ll start laughing or he’ll make a joke. His sense of humor keeps other people going.”