Pro/Con: Is technology convenient or consuming? 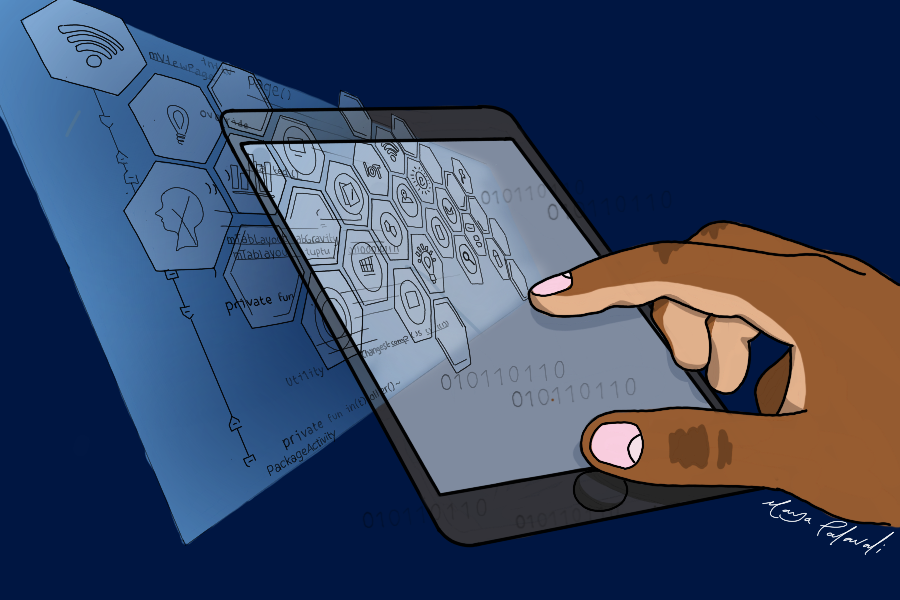 In the age of technology, many have the belief that the younger generation is overly dependent on it. The Sidekick executive editorial page editor Manasa Mohan proposes the viewpoint of societal technological comfort instead.

“You couldn’t survive a day without your phone.”

“Your generation is too reliant on technology.”

“You spend all of your time on your phone. Don’t you have anything else to do?”

Such complaints are often heard by teenagers from disgruntled adults about teens’ usage of devices, notably their phones.

It is hardly fair to point a finger at Generation Z, claiming that we are too reliant on technology or are too “addicted” to our devices and gadgets. Regardless of the generation you belong to, it is difficult in today’s day and age to find anyone who isn’t frequently checking their phone for new messages, looking at their social media feed, rapidly texting or simply on their phone for extended periods of time.

Even though most people engage in similar uses of technology, Generation Z is often on the receiving end of complaints that we are too glued to our technology, mainly from older generations who argue that we can’t live a day without our phones.

Now, not all of this is untrue: a study from CGK found that 55% of Gen Z spends 5 or more hours on their phones per day. This should not be classified as an addiction, but rather as the way our lives have always been and will continue to be.

To understand why Gen Z spends so much time on their devices, it is imperative to consider that Gen Z is the first generation to have generally unlimited access to the internet, devices and social media since our birth. As we grew up, we became accustomed to how these devices work and the comforts that the technology provides us, regardless of how late in life we were introduced to these devices.

MaryLeigh Bliss, chief content officer at Ypulse, sums it up: “Millennials and boomers are addicted to their phones. Generation Z simply hasn’t known a time without the device.”

I am not trying to argue that technology is completely flawless. In fact, I am the first to admit that technology has its downsides; however, it is time to start considering it has always been a part of Gen Z’s lives and has been making our lives more convenient and comfortable for years. Why would we not use technology to our advantage?

Even at Coppell High School, students and teachers saw a transition from a paper-based curriculum to one that integrates technology. Yes, that presents its own difficulties, but in 2020 when students were moved to a completely virtual classroom environment, technology was there to help facilitate that difficult transition. CHS had minimal struggles with preparing every student for the mandatory virtual period as all students were equipped with iPads that enabled them to complete their daily schoolwork. After the pandemic, teachers continued to intertwine the use of technology into their classrooms through whatever methods they found most appropriate for their class.

Current teenagers have grown up in a world filled with technology and as a result, we’ve become quite savvy with our use of it. Again, I understand that some may argue that social media may provide too large of a distraction with notifications, but we are still capable of taking steps to curb the amount of distractions when necessary. We know when we need to draw the line with our use of technology and we have the ability to do so.

Contrary to popular belief, Gen Z is not addicted to our phones or to social media. We have just grown used to them. We’re comfortable with them. We are used to the way our life functions with them. Is it so unreasonable to want to keep that same technology in our lives?

Technology is taking over 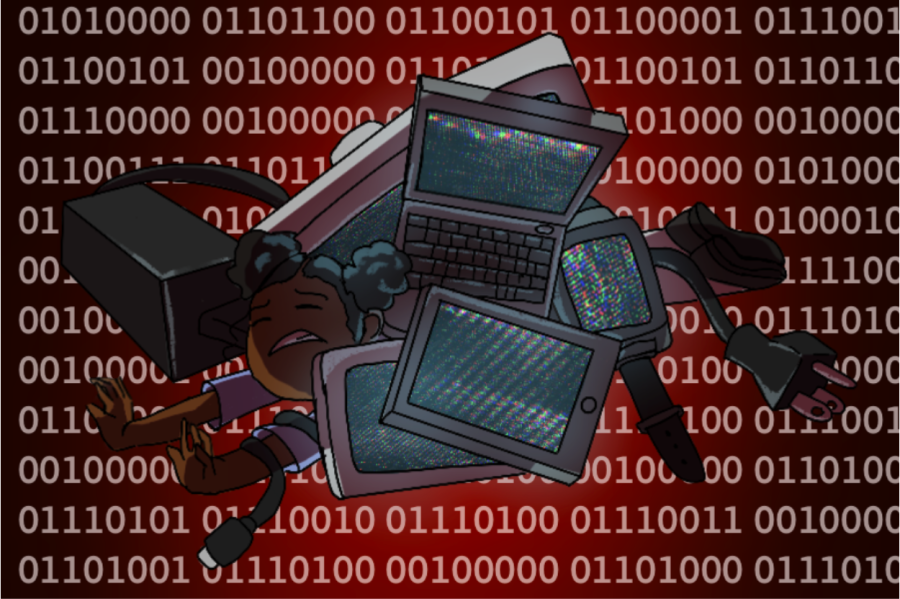 Technological advancements have always changed society in monumental ways. The Sidekick entertainment editor Saniya Koppikar thinks as of late, this influence has progressed past a comfortable level.

In front of you, blazing yellows and oranges paint the sky. The Earth is scorched, the dried surface of a wide grassland stretching for miles to see. A lion’s roar stretches through the air.

Behind you, a safe, sterile house, competent enough to brush your teeth, raise your children and cook the food. The HappyLife Home, complete with everything you could ever want.

Which is more dangerous?

Ray Bradbury’s “The Veldt” paints this picture: a murderous African safari conjured by the minds of the Hadley children, who have been exposed to the advanced technology of the HappyLife Home and Veldt itself for all their lives.

In Bradbury’s typical fashion, the sci-fi short story leaves its dreary ending––Spoilers! The Veldt causes the demise of the Hadleys’ parents––mostly up to interpretation. Still, the chill it leaves its reader with is unmistakable.

It is hard not to wonder what could tempt an innocent mind towards murder. Was it the absent parents? The unlimited capability? The lack of authority?

At the risk of sounding older than my age, I feel that the influence of the technology itself cannot be denied. Whether it was what corrupted Peter and Wendy Hadley or not, the pervasiveness of technology in our reality is concerning. And it’s only growing.

Everything seems to be smart nowadays, doesn’t it? Smart technology spans from phones to watches, from watches to appliances and from appliances to homes. To continue with the literary metaphors, it’s as if the Eyes of Doctor T.J. Eckleburg are constantly watching over us.

There’s AI technology that can translate a sentence to a video in a matter of seconds. In April, artificial intelligence research group OpenAI announced a new version of DALL-E, a text-to-image generation program, called DALL-E 2. The new program improves upon the original, which was named after the robot WALL-E and artist Salvador Dalí, and produces pictures depicting user-input. Recently, tech research company Runway announced a similar text-to-video program.

In case the significance of this kind of program isn’t getting to you, let me state it in a different way.

A program exists, currently, in which one can type in “generate a lush garden,” and a corresponding scene will be called up. Then, one can type in “fade in over time,” and the video will zoom in slowly. Type something else. Click an arrow and a new scene under the criteria will appear. Click again. Again. Again.

Under threat of termination of the offending account, the tech company prohibits creating, uploading or sharing images that are not G-rated, that could cause harm or mislead one’s audience about the involvement of AI in the process of creating the image.

In a further attempt to regulate the use of the program, the program is not currently accessible to the public; however, OpenAI hopes to eventually make the program available in third-party apps.

This kind of program is not a bad thing. Actually, it’s quite incredible, and could be used to increase efficiency and bring new innovation to the art world.

The realist in me just wonders what could be made obsolete as a result of this technology becoming commonplace. The substitution feels familiar, reminding me of a similar occurrence closer to home.

In the last few years, Coppell High School has seemed to rely more on technology than ever before, swapping paper handouts and poster projects for online assignments.

Lessons recorded as extra content and activities created to work without much student-teacher interaction have admittedly come in handy with absences, lessening the isolation of students who are not in the classroom. More often than not, though, digitalization has been a problem rather than a benefit. When Wi-Fi becomes spotty, devices glitch or websites crash, the classroom is fundamentally disrupted. Students sit impatiently; teachers desperately try to troubleshoot. The trip to the copy machine to print out a quick new assignment feels like admitting defeat.

RAD Data Communications chief technology officer Yaakov J. Stein puts it best: “The problem with AI and machine learning is not the sci-fi scenario of AI taking over the world and not needing inferior humans. The problem is that we are becoming more and more dependent on machines and hence more susceptible to bugs and system failures.”

Technology as it exists in our lives is benign as long as it is completely functional. When mistakes––invasions of privacy, crashes, blackouts and censorship––begin to occur, that’s when the problem is clear.

How are we to stop it then, after it has already taken over?