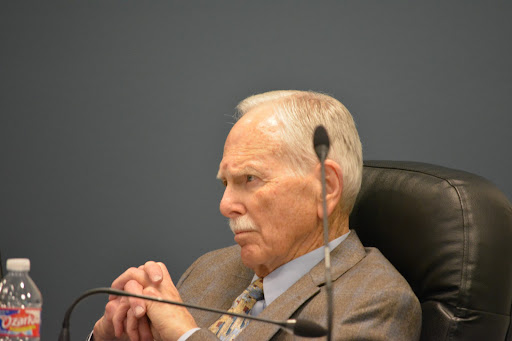 Cliff Long, Place 1 on the City of Coppell Council, was elected to council in May 2014. Long emphasizes Coppell’s community members’ concerns in his decisions on council.

Coppell City Council Place 1 Cliff Long is a retired certified financial planner and has a background in accounting before taking up his new position. Long approaches his duty from the lens of a local businessman to determine his decisions.

What is one thing that you value in your position?

Communication is critical. The rest of your life you will struggle from time to time with adequately contributing communication to the folks that you’re addressing, whether they’re students, business co-workers, clients; communication is always a difficult part of being successful in what you’re going to do.

What are the responsibilities of a council member?

The responsibilities of being a council member: take a look at the issues that come before the council, analyze them and draw a conclusion as to whether to make the vote. In all of the various things that we do, I would not change any vote that I’ve made in the [past] eight years.

What impression would you want the citizens of Coppell to have of you?

I would like for people to say that I studied the facts of each one of the goals and voted for what I thought was the best thing for the city of Coppell.

I think they [should] continue to do what I do; follow as closely the rules and regulations that are set down in my situation, be very careful with the money and always be looking out for how you can do something less expensive.

What are your legislative priorities?

I like what I see in the 2040 plan; this plan was put together by the citizens. We took what the citizens said they would like to have and we built out under the 2030 plan the facilities of the Life Safety Park, the CORE, Coppell Arts Center.

Now, we’re at the 2040 plan, now we’re getting into talk about how we are going to handle the technologies going forward and what we can do about housing in Coppell to allow the seniors to be able to afford to stay in Coppell and stay in a single family house.

I’m willing to take anything that we feel like the citizens really want. There’s always a problem and that you’re never going to get full [votes] by all citizens. There are going to be different opinions about it, but if you touch something that’s put together by citizens who were interested in taking their time and effort to put a plan together for the council, then you need to follow up with it.

What are some of your accomplishments during your term?

The Chamber [of Commerce] three years ago named a leadership award after me, so that was a real surprise. That was a nice accomplishment; I wasn’t aiming for that, but that was a very nice note of recognition that I might be on the right track in what I’m doing.

How has COVID-19 issues and protocols impacted the city council?

I have not been pleased particularly with our federal government’s [policies] as it relates to the COVID issue, but we comply in a situation where we had to.

It was one of those unexpected times, like the problem with the flu epidemic back in 1918; and it cost us money because the city had to do stuff that they would’ve never had to do if there wasn’t COVID-19. It was difficult for the schools, still is to an extent, and it was difficult for the city because we had to be concerned about the city staff. But we’ve gotten through it and we’ve gotten through it pretty well; the city and the school district as a whole. I’m very pleased with what we were able to do.