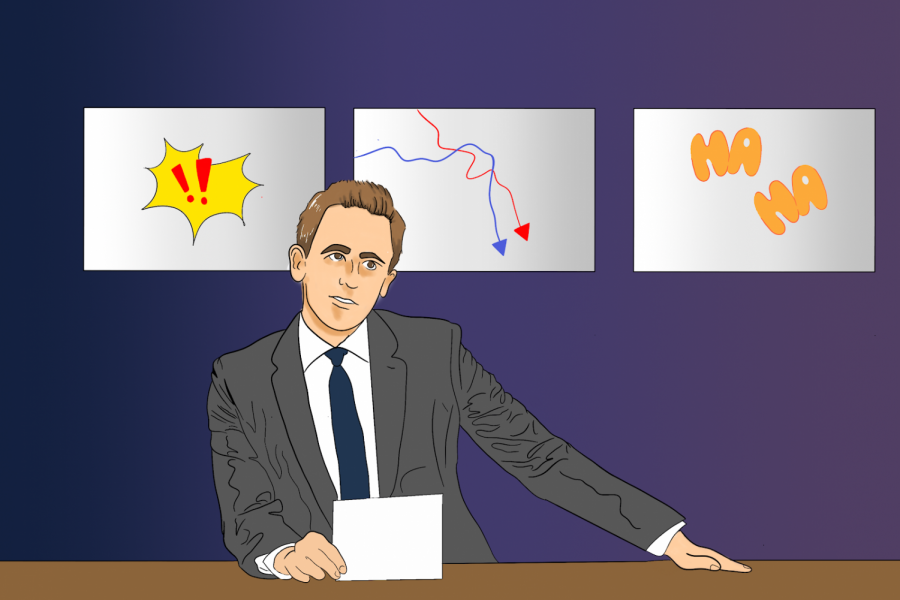 Headlines flood our vision as we open Twitter. Turning on a television to cable news means flashy breaking news tickers and superficial filler conversation in between layered clips. Scrolling through a news site means a deluge of stories to sort through, with headlines and photos begging for clicks.

News is bound to be distorted when profit is its motive.

As attention spans become shorter, the information industry has become more of a battle to maintain that attention. This can short-circuit the public’s perceptions of the effort it should take to be informed.

“You have to make your story as enticing as possible to get people to stay on the page,” Star Local Media journalist Audrey Henvey said. “That’s an uphill climb, because the attention spans that people have have become so short, but the stories we’re trying to tell, especially in the days we have today, really require you to read the full story. There are journalists putting their blood, sweat and tears into making sure they accurately reflect what’s going on and cover both sides.”

During my time on Sidekick, I have explored various ways of providing and consuming news. I spend late nights watching “Last Week Tonight” host John Oliver pick apart issues ranging from public shaming to authoritarianism and start my morning with NPR’s 15-minute news podcast, Up First. Local and regional news like NBC DFW, the Coppell Gazette and Citizen’s Advocate make up my research as news editor, but also allow me to understand my community.

A format that has always interested me because of its ability to balance humor with nuanced analysis is political comedy. Nightly monologues and segments are shared across social media and YouTube and do not require consumers to tune into cable news. This gives political comedy appeal and accessibility, elements that traditional news often lacks.

Shows such as “Last Week Tonight”, “Late Night with Seth Meyers” and “The Late Show with Stephen Colbert” are condensed and scripted. The political segments are produced by research teams and writers, balancing the ability to incorporate jokes and perspectives from broadcast clips and news stories to evoke emotion. As a result, political comedy can often be more well-researched than national broadcasts, which rely almost exclusively on discussion and interviewing.

“Finding that way to be funny but also convey a message is good because you widen your audience,” Coppell High School AP world history teacher Connor Blake said. “You don’t lose people that just turn off when things get hard to weed through. It’s good that they’re able to do this, and it’s comedy based. They have to make sure they do it right, but they also have to make sure what they are doing is in a way that informs and entertains, but in the end, informs.”

For instance, in Blake’s class, he uses a video from Oliver to explain imperialism. In it, Oliver is a fictional character named Sir Maps A Lot and discusses the redrawing of borders based on European perceptions. The humor allows him to emphasize why drawing arbitrary lines on a map does not work and in what ways it might affect the local populations.

“It takes a historical event and filters it through a comedic lens, and it still does have real world lessons to be learned from that small segment,” Blake said.

Humor requires more cognitive energy to understand and boosts retention, which allows the tonal shifts in political comedy to make themes and messages more memorable. The viewer is being taken on a very orchestrated ride of the day’s events or the minutiae of a particular issue, which allows these segments to hit specific informational and entertaining beats. When done right, the format is able to encapsulate the frenziness and emotions of the day’s events and peoples’ reactions to them in a crucial way.

Rather than aimless opinions and discussions that lack conclusions, political comedy gives you perspective. Innuendos and historical references can border on offensive, but that subjectivity is a byproduct of taking a stance on events or issues. There is a danger to satirizing events, but it takes craft and effort to properly incorporate humor in a way that makes individuals connect and care. It’s a delicate approach that, if done correctly, can be extremely effective in motivating viewers to do further research and seek action.

“They do a good job of bringing up issues and making people go ‘What is that about? I’m going to go look into that,’” Henvey said. “They do a great job of using that attention span issue to spark the question and to make a joke out of it. Maybe that will make it stick more, and hopefully it stays in your brain enough to investigate further.”

On a broader scale, there needs to be more of an appetite for information purely to inform. Local news needs to be invested in and recognized by the communities it serves, before its necessity is lost in the chaos of the national and international news cycles.

While late night shows should not be anyone’s singular source of news, their presence stretches the boundaries of how news can be packaged and consumed. It’s an imperfect process, sure, but so is objectivity in news.

“I don’t think anyone’s really succeeded in finding a perfect way to give information to people,” Blake said. “It’s not that we can’t do it; we can; it just takes discipline to learn about the issues that we face. It’s admirable what we’re experimenting with in terms of how to give information, but in the end, no matter how well entertainment does with giving us news, it still will come down to you having to do your own research and make your own opinions.” 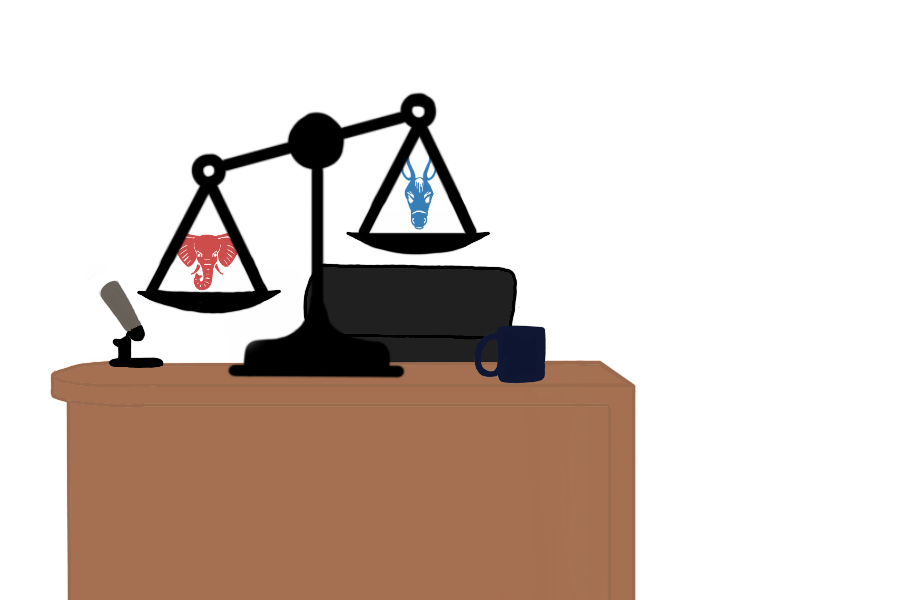 Con: Late night TV should not be your first news source

Whenever I hear about a political debacle in the news, my first thought is, “Wow, the late night hosts are going to have a field day with this.”

I’m usually right. At 11:59 p.m., after I’ve scrambled to turn in my last assignment for the day, I open up my iPad – because yes, as a culturally evolved Gen Z kid, I watch TV on YouTube – and take “A Closer Look” at what my favorite late night TV hosts have to say.

While I thoroughly enjoy my daily routine of listening to Seth Meyers’ comedic take, late night TV shows are not my first or primary source of news. Unfortunately, the same cannot be said for many other youth.

A study by the Pew Research center found that 61% of young people regularly or sometimes learn campaign information from comedy television.

While late night TV shows can help the younger generation become more interested in the news and politics by making information more entertaining and accessible, they are explicitly biased and may not be an accurate, holistic representation of current events.

“People like Stephen Colbert and Trevor Noah are bringing humor to news and that’s involving a lot of young people, especially people in high school, because it’s really funny to watch,” Coppell High School senior Keertana Narayanan said. “These personalities jump to whatever sensationalized news they see first because they want the engagement.”

Because late night shows gravitate towards the most comedic events, they may not focus on the most important information being discussed. Relying on other, more objective sources to understand the news also encourages citizens to form their own opinions through individual analysis.

“A lot of kids watch late night news shows that are not news but think that they are news,” CHS Principal Laura Springer said. “We should fact check everything. You have to really look at who is giving you the news. Is it a reliable source, and are they known for being honest and trustworthy?”

To KCBY-TV adviser Irma Kennedy, the current state of late night TV shows is doing more harm than good, and she thinks that the constant jokes could be increasing division within the country.

“Now on late night TV, it’s a lot of making fun of everybody,” Kennedy said. “It adds to the negative discourse that’s going on in our country. It’s changed a lot. There has to be a level of kindness and professionalism and we’ve crossed that line.”

The fact that news has taken on a much bigger role in comedy is indicative of a trend that shows politics is becoming more integral to our daily lives. Saying “I don’t do politics” is not as feasible when a large section of pop culture is eagerly engaging in political discourse.

Comedy can make the news much more digestible, and turning on the TV to listen to humorous takes on serious, dense matters can be a welcome relief at the end of a long day.

Just make sure your news consumption is varied and wise, so late night shows aren’t the first source you turn to.