The ramifications, realizations of racial inequality 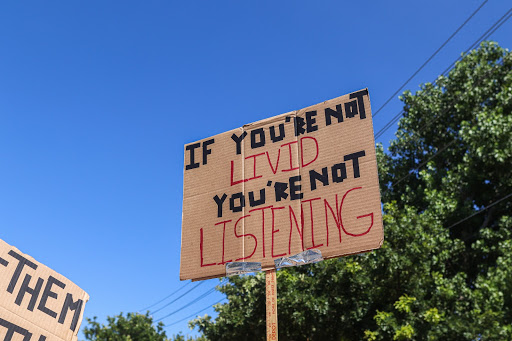 “I can take a joke,” Coppell High School sophomore Faith Smith said. “But I can’t take racism disguised as a joke.”

Whether the intention behind acts of discrimination are based on race, faith, sexuality or culture, their presence is still felt by many in Coppell. These acts can range from microaggressions (comments or actions that subtly and often unconsciously or unintentionally expresses a prejudiced attitude toward a member of a marginalized group) to hate crimes.

Exploring the former, microaggressions are often unintentional and can range from statements such as “I do not see color” to “why are you so loud?” They often use subtle language to get across their point. In the examples above, claiming to not see color ignores that individual’s  different racial and ethnic perspectives and asking about loudness encourages minorities to act “normal.”

“[Microaggressions] are also people making Black jokes,” Smith said. “I went along with them, but they are not funny.”

Microaggressions isolate, alienate and stereotype individuals into a “box” –  that is, associating an individual with the stereotypes of the minority group they identify with.

On the surface level, these may seem like nothing more than scratches. However, enough scratches can lead to big, open wounds – wounds that, unlike scratches, never quite heal. Misleading due to their name, microaggressions’ impact is anything but micro. These acts have been tied to depression, anxiety and post-traumatic stress disorder.

These covertly discriminatory acts perpetuate. Every time an act is brushed off as a joke or not intentionally harmful, it lets the perpetrator know they have not done anything wrong, that their behavior is OK. This instills underlying bias, which might not be passed off of as “just a joke.”

“One year at [CHS], it was me and this other Muslim student [in class], and my teacher had CNN playing,” Black, Muslim former CHS student and current New Tech High @ Coppell senior Nawal Seif said. “[The show] was talking about ISIS and terrorism in the Middle East, and my teacher paused it and he was like, ‘What do you think makes them act like this? Can you tell us why they choose to do this?’ Why would we know why ISIS chooses to do the things they do?”

These aggressions are not mutually exclusive with older age. In younger individuals, it is a reflection of the environment they are a part of.

“Children parroting something they say on YouTube or any platform doesn’t ring to them as a threatening comment,” Cottonwood Creek Elementary fifth grade teacher Malachi Ewbank said. “It’s something they saw or heard, and they’re just trying it out. My first question [when I see such behaviors] is, ‘Do you know what that means?’”

But what about discrimination that is evidently spelled out?

Coppell has recently seen its share when a racial slur was written on one of the trails in June. And, this behavior is mimicked nearby.

In August, a letter not specifically addressed to an individual arrived at a unit at an apartment building on Ranchview Drive in Irving. The letter was clear: “we will have no choice but to shoot mercilessly at workplace, in community, on pool or on playground.”

The letter targeted Asians, specifically Indian and Chinese individuals in the information technology industry, claiming they had taken jobs away from American citizens.

“The [letter] took me back, and I had to stop and reflect on it for a while,” Seif said. “It’s 2020 and that’s still happening, we’re still getting those letters. I was so scared because I have so many family and friends that live in Irving. How do you go about your daily life knowing there are people who are dangerous and armed who don’t want you there when you’re not doing anything to harm them?”

The letter is currently being investigated by the Irving Police Department and appears to be an isolated incident.

However, discrimination of other forms is pervasive.

It was when Smith was on the last leg of her protest that she felt truly empowered. As she marched down Heartz Road with a crowd of about 70 people behind her back, those who opposed her mission appeared, yelling right back at the crowd. But Smith did not try to stop the words that erupted from her mouth, nor she did not want to: “No Trump, no KKK, no racist USA.”

Expecting only about 20 to 30 people, Smith was surprised when she, along with her sister, CHS 2020 graduate Angeli Smith, stood united with several individuals in the protest she helped organize.

Despite COVID-19, protests have still occurred. These marches act as one avenue in which students and community members can advocate.

“What [some parents in Coppell] did not like to hear was that we like to live in a bubble,” Smith said. “They need to hear that there is something going on and they need to understand this. Most of the people fighting against us are the ones who need to hear it the most.”

The pinnacle of the march occurred as the protestors took over the Sandy Lake Road and Denton Tap Road intersection, halting traffic to ensure their message was heard.“Whoever you are, you are going to pause your life and take a moment to hear us. It might be a little inconvenient for you, but racism isn’t convenient and all the victims of racism did not get to go home, so you don’t either,” Smith said.

Though protests are the quintessential form of advocacy, students have been exploring other means of spreading their messages.

Putting almost a decade’s worth of art experience to work, Coppell resident and The Hockaday School sophomore Amber Li, spends up to seven hours working on commission paintings, donating all proceeds to ActBlue, an online Democratic fundraising program. In total, Li plans to donate $345.

“[I’ve experienced] overwhelming support,” Li said. “I never imagined this many people would come to me to draw something for them. I never earned anything from my artwork, so having people be so willing to pay [up to] $100 for a piece of art has been so shocking and overwhelming.”

Despite not being a member of the Black community, Li empathizes with their plights, especially due to her experience being a racial minority.

“All of us are going through racial oppression because our society is just very racist as it is, not just towards Black people but also towards other minorities. If [non-Black individuals], don’t show support and do as much as we can to help lift up communities in need, then when it’s our time, we shouldn’t expect the same support,” Li said. “Have empathy; you are a human being.”

Exploring written media as a form of advocacy, Dallas magnet school The School of Science and Engineering junior and Coppell resident Maanas Sharma created The Journal of Interdisciplinary Public Policy, with its first issue revolving around criminal justice and policing reform.

“Before the journal, I was discussing [BLM] with a friend and there was just an overwhelming amount of disproportionate outcomes on the basis of race,” Sharma said. “Everyone has their own interdisciplinary way of thinking about public policy and they need a rigorous place for that to happen from a lot of different angles.”

The purpose of these forms of advocacy is not to push the “right” ideas onto individuals, but rather to create a platform and environment to discuss and educate.

“One of [our readers] tagged our journal in their Instagram story of them reading the article, and they had taken a picture and underlined a particularly shocking line,” Sharma said. “That’s exactly what the goal of the article was. It was interesting to have someone read through the journal and learn about a new topic.”

Change is the goal. And to a certain extent, change has already been made.

“When I first started teaching, [the racism I experienced] was subtle,” Ewbank said. “Coded language gets across your point without being overtly racist. Now, because of [Coppell ISD’s] diversity, we’re starting to grapple with ‘what does it mean now that we are more diverse?’”

While there is no right answer to this question, it encourages reflection on how the education system can be changed to be more inclusive and educated on racial minorities.

CHS Principal Laura Springer thinks the education system can be changed to be more inclusive and educated on racial minorities.

“Change comes through education,” Springer said. “It comes from not telling people they’re wrong, but showing them instances that we have to address and that is just humanity.”

Regarding the realm of curriculum, schools can place a greater emphasis on the role Black Americans have played in the founding of the United States and the role they continue to play. Typical American history courses end the discussion of Black Americans with the Civil Rights Movement, leaving almost a 60-year gap till today.

Springer also suggests taking a similar approach to racial equality as DARE, an educational program that emphasizes the negative impacts of drug use, gang membership and violent behavior.

“It’s the same type of curriculum, but you put it in place for inclusion,” Springer said. “You start teaching how you become an inclusive person. We educate you on diversity and how you become inclusive with that diversity.”

Administrators also encourage students to confide in them and other faculty members when feeling alienated or excluded.

“If parents can help their children understand what they need to say when [racial inequality] instances arise, that’s first and foremost,” CHS counselor La Queena Garcia said. “It’s important for me as a counselor to help students communicate their feelings. If students don’t understand how to control their emotions and voice what they are trying to communicate, it isn’t going to work.”

Students should strive to convey not only their feelings but the change they would like to see in their community based on those experiences.

“When you look at students participating to achieve racial equality, [they are] telling their own truth about how these situations are making them feel,” CISD Board of Trustees member Anthony Hill said. “So it’s, ‘Where are you today? How do you feel? What would you like to see in the future?’”

For Ewbank, the experience of being isolated was not foreign growing up as a biracial young boy in the United States.

“When I entered first grade [as a student], I was the only person of color for the first two years,” Ewbank said. “I came home and I thought my name was the n-word because I had been called it so many times. I grew up and I thought it was always my job to defend the color of my skin by asking them to come out back after school and settle things on the playground. My dad said you can’t beat away the beliefs of somebody else.”

From there, Ewbank learned the importance of questioning and having meaningful conversations rather than pointing fingers and blaming.

“I question. I get further if I am asking questions,” Ewbank said. “If you make a [discriminatory] statement, it’s more important to keep putting the ball back in your court. If you are seen as threatening or mean, you’ve just alienated the child and you’ve lost the chance to help another human being become inclusive.”

For educators and faculty members, mandating more diversity and inclusion bias training from CISD employees can be implemented, bringing awareness to the biases that may play a role on campus.

As the racial makeup of this city fluctuates, multiple parties can use effort to unite and hinder the impacts of discrimination, but this effort involves everyone.