Budget goes to vote for approval next month 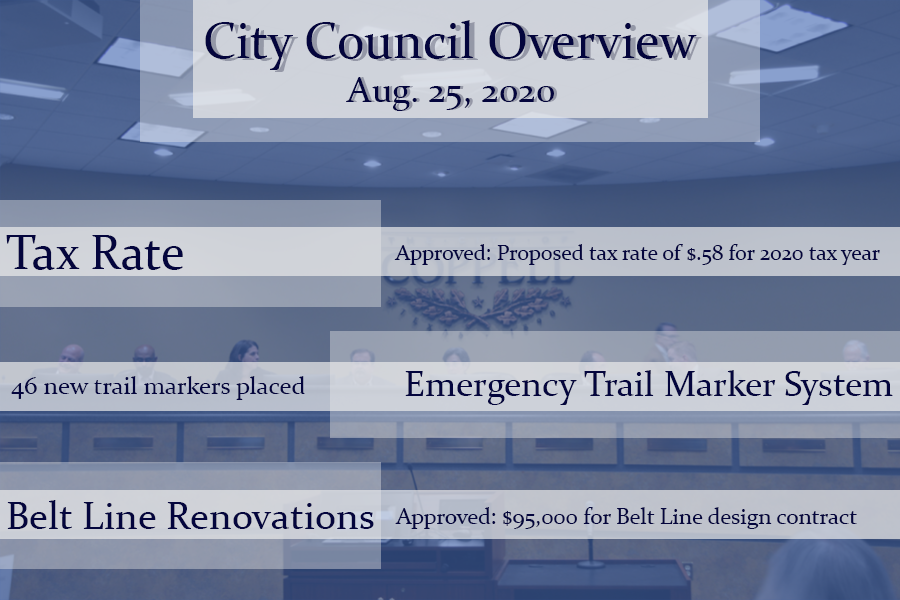 At Tuesday’s Coppell City Council virtual meeting, approved motions included an increased budget for Belt Line Road renovations and a tax rate of $0.58 for the 2020 tax year, which will be brought up for public hearings on Sept. 8. Photo illustration by Sally Parampottil and Sreeja Mudumby.

On Tuesday night, the Coppell City Council approved the publication of the reduction of the tax rate from $0.58400 to $.05800 for the 2020 tax year. This rate will then be discussed in the Sept. 8 council meeting, after which it will be presented in a special council meeting to vote on virtually at 6 p.m. on Sept. 15.

“Based on the feedback from citizens, it’s been very clear that we’ve been living in a very special place,” council member Wes Mays said.  “The council does not make decisions for the short term, we make long-term decisions for the benefit of our citizens and for the City of Coppell. It’s unbelievable that we’re able to present a budget to the City of Coppell that’s actually including a tax rate decrease.”

The Council approved an addition of $95,000 for the reconstruction of Belt Line Road. Director of public works Kent Collins shared how the landscaping plan is in the process of being amended in order to design around the existing trees, along with complete design by spring of 2021 so that construction can begin around May and June of 2021. Additions to the previous plan include a Traffic Control Plan to accommodate higher volumes of traffic and a Paving Section.

Other items approved and discussed include the Interlocal Cooperation Agreement between the City of Coppell and Denton County Transportation Authority, irrigation and rerouting on the MacArthur Trail Project and an amendment to the Master Fees Schedule.

The full-length recording of the meeting can be found here.