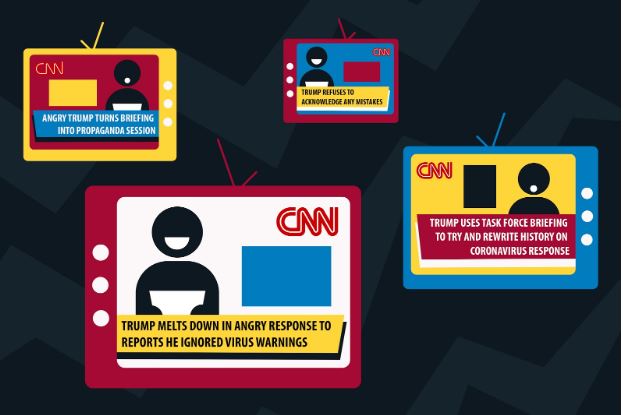 Media bias creates a negative impact on mainstream media by leading their audiences to a certain idea instead of properly stating facts. The Sidekick staff writer Meer Mahfuz explains the importance of being an objective reporter using his experiences and journalism ethics.

On the morning of May 3, I watched one of the most biased journalistic segments I have ever seen.
A 50-second segment of CNN Anchor Don Lemon grilling President Donald Trump on his distaste for former President Barack Obama sent my inner journalist into a flurry of anger and disappointment. Questions such as “Is it because he’s smarter than you?” and “[Is it because he] didn’t need daddy’s help” are clearly unobjective and should never be acceptable in the journalistic world, yet we still applaud CNN for being “objective.”

Ever since President Trump began labelling mainstream media organizations as “fake news”, the need for proper journalism hasn’t been more evident. An industry referred to as the “fourth branch of the government” holds a major piece in American democracy: spread of information.

The bridge between the American public and the government has its own set of responsibilities. While the executive, judicial and legislative branches are legally required to keep each other in check- hence “separation of powers”- the press is morally and ethically required to provide updated, factual information for the public. The cycle of decision making and objectively reporting those decisions is intrinsic to the continuation of our democracy.

A right guaranteed by the Bill of Rights’ “freedom of press,” establishes how important the role of the media was to the American people throughout our country’s history. As news consumption becomes more digitized and easier to access, the ability to spread falsehoods and mislead people has also become easier. We can observe these attempts to misinform the American public presence all over mainstream media organizations including CNN, Vox, MSNBC and others.

The question of intention boils down to ownership and company leadership. The views of an owner effectively sway the publication’s ability to objectively report stories. In this scenario, CNN’s owner, Jeff Zucker, is an avid President Trump critic. Having far-left leaning views has allowed him to push those views onto his publication.

An investigation by Project Veritas into Zucker’s leadership, aided by CNN whistle-blower Cary Poarch, has documented the extreme bias that Zucker pushes onto his employees. Zucker’s personal vendetta against our president has allowed other stories and topics go unnoticed as Zucker emphasizes that “impeachment is the story.”

“It’s also worth noting owners and executives now aren’t journalists and don’t have a passion for the truth. They have an agenda.” KCBY-TV adviser Irma Kennedy said via email.

Throughout this year on The Sidekick, my ability to identify and analyze subjective news has greatly increased. Before joining a nationally-acclaimed journalist program, I would judge my news based on my political opinion. Throughout this year, I have been familiarized with the Society of Professional Journalists’ Code of Ethics (set of journalistic ethics), and it has greatly helped in my ability to be a learning, ethical journalist. The question I hold is: why aren’t mainstream media anchors and publications graded on the same standards as the rest of the journalistic world?

Going on any type of political rant without effective evidence like Lemon’s would be shut down immediately by my editors and adviser. While, admittingly, The Sidekick is no perfect program by any means, referring to the imbalance of left-leaning vs. right-leaning content, I can say that having leaders that encourage diversity in thought aids in adherence of the SPJ Code of Ethics. Instead of being forced to write certain perspectives or cover certain political events by the executives, such as CNN or MSM, I am allowed more freedom to express my views in a balanced way.

In a world where we pride ourselves on diversity; the diversity of race, religion, sexual orientation and others, we are losing arguably the most important form of diversity. Diversity of thought trumps all forms of diversity while other types of diversity only decorate a group or organization. The ability for each member of a group to think differently on certain issues raises awareness and enables finding the truth.

“In a perfect world, it shouldn’t matter what our personal viewpoints [are] if we would seek the truth,” Kennedy said.

It is more important than ever for us, Americans, to be critical and suspicious of MSM. Heading into a crucial election cycle, the peddling of misinformation will be immense. Recognize the importance of facts, not biases as your cloudy understanding of topics compromises our democracy. Hold journalists accountable, educate yourself on priority issues, and stay vigilant in your consumption of information.