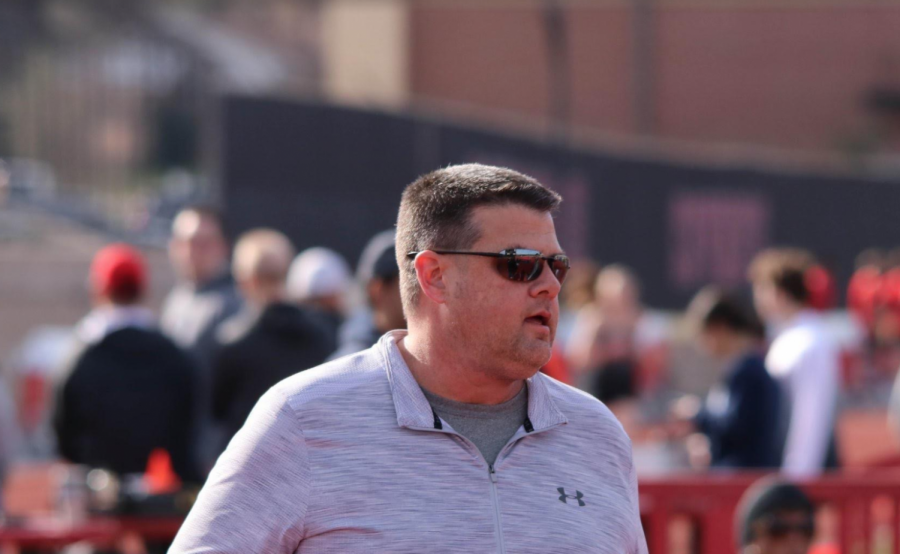 After coaching track and field at Coppell High School for seven years, the National Federation of State High School Texas Boys Outdoor Track & Field Coach of the Year was awarded to Coppell coach Karl Pointer in recognition for his outstanding efforts.

“I found out probably early September when I got an email from the UIL that they had nominated me to the NFHS board, but the only people who knew were my wife [Laurel Pointer], [Coppell ISD] Athletic Director Kit Pehl and [CHS Principal] Laura Springer,” Pointer said.

From running hurdles at Clovis High School in New Mexico to 23 years of coaching – half of which is coaching track as a second sport – Mr. Pointer has experienced the different struggles that come with being both an athlete and a coach.

“As an athlete, you went out and did the things the coaches told you to do, on the coaching side of it, there’s so much more,” Mr. Pointer said. “You plan the workouts, you’re looking at how the kids are progressing and as you are planning for a meet, you’re gonna look at who’s going to run where to score the most points for the team.”

Through the tough times that come about while coaching, Mr. Pointer’s Christian faith has offered him strength. Mr. Pointer attends Irving Bible Church and is involved in the Synergy Sunday school class.

“Christianity drives everything he does and I love that about him,” Mrs. Pointer said. “He’s very passionate about his faith and he knows if he can grow there, with his relationship with the Lord, he can grow in everything else that he does. This translates to his kids when they can see that even when you’re not having a winning season, or if you stumble in a race, that that’s not what it is all about. He wants to grow his students and athletes to be the best person they can be.”

Coppell senior Samir Thota cites Mr. Pointer as a main source of support for his transition from football to track and field after he left football after his sophomore year.

“Coach really creates a competitive environment and he pushes us to get better, but he’s also very understanding of your situation,” Thota said. “He takes into consideration what your strengths and weaknesses are.”

Due to the spread of the coronavirus, as UIL canceled all sports events for the rest of the school year, Coppell’s track and field team was only able to participate in four meets.

“Ultimately knowing I can rely on my faith helps me during tough times,” Mr. Pointer said. “When we came back from spring break it was like, ‘Oh, we’re not coming back,’ and we knew we probably weren’t going to go back, but there’s always a glimmer of hope. For me as a coach, just keeping that hope and helping the kids still have hope was huge.