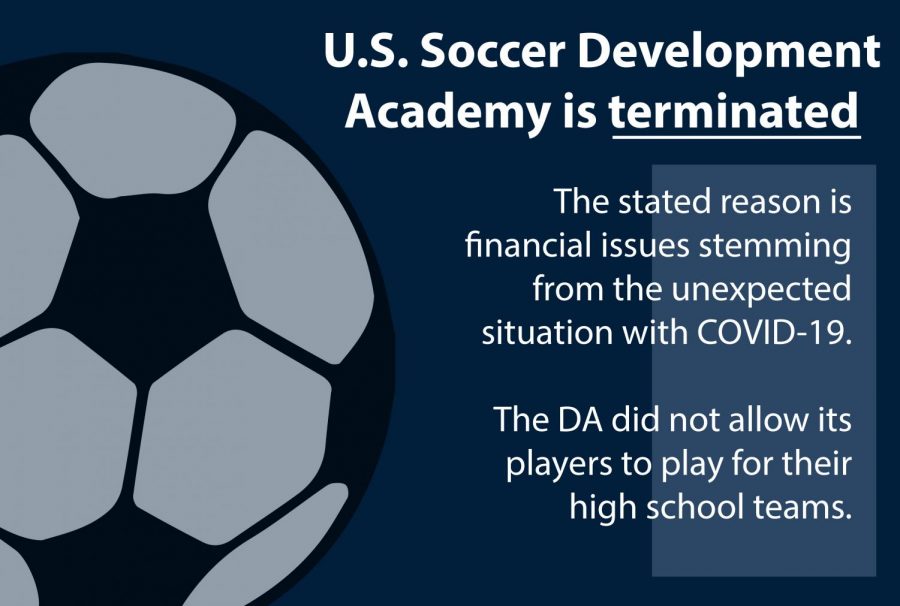 The U.S. Soccer Development Academy was an elite youth soccer program spanning 200 teams, including girls teams, prior to its termination on April 15. Multiple Coppell High School students competed for the league, meaning they were unable to play for their high school soccer team.

The appeal of the U.S. Soccer Development Academy (DA) was enough for Coppell High School 2019 graduate Raul Carrillo to move away from his family in Tyler to play for the Dallas Texans.

Leaving behind his parents and younger sister, Carrillo joined his older brother, who played for FC Dallas at the time and lived in Frisco, as some of many players who found the experience gained from the DA worth moving for.

The DA was terminated on April 15, with U.S. Soccer citing financial issues stemming from the impacts of COVID-19.

The DA was created in 2007 and spanned 200 teams, including girls teams. For many, it was an opportunity to compete at a high level and be on scouting radars for potential college teams. Carrillo received offers from multiple Division I schools, such as the United States Air Force Academy and Jacksonville University, and now plays for Tyler Junior College as an attacking midfielder and left wing.

“It meant a lot to me, the Development Academy did a lot for me,” Carrillo said. “They’re the reason I play college soccer right now and they provided me with a lot of help with scholarships. It was just a good experience playing DA and I got to play quality teams from all over the nation.”

“It was pretty hard being away from my family since I was used to seeing them every day, as I was only a sophomore at the time,” Carrillo said. “It was worth it, because I had a really great experience playing DA and I would see my parents at my games every weekend if it was at home, which is in Dallas. I did struggle at first, but it was all worth it.”

However, playing for such an elite level came with a price, in addition to the actual team fees and expenses. DA players were not allowed to play for their high school teams. Current students such as juniors Skyler Stricker and Brandon Gast and freshman Ari Robicheaux were unable to play for the Coppell team this year due to their participation in the DA.

For CHS chemistry teacher and former Coppell girls soccer and Solar coach Chris Stricker, the restriction on playing for high school teams was a flaw in the DA.

“It was a shame that U.S. Soccer didn’t allow kids to play high school soccer,” Stricker said via email. “I think that was their biggest fault in the whole DA structure. As a retired high school coach, I know how valuable that experience can be to help get a player ready to compete at the next level. The great life lessons it teaches players, and most importantly, the relationships you gain by playing with kids in your community and representing your school.”

The end of the DA could signal a new level of competitiveness on the high school level, but it could also open opportunities for the MLS to boost its youth league.

“From the start, I believed this is how it should have been,” Balcom said. “While there have been some very solid Solar and Texans DA teams, only the MLS teams should have a Development Academy.  They have the financial resources to be able to support youth teams that would allow their players to play for free.”

For DA players who were looking forward to the 2019-20 season prior to its cancellation, club teams are still figuring out which new leagues they will be joining. According to Stricker, Solar was offered to be a part of the MLS League, and other tiers include ECNL and USYSA Classic League. Stricker refunded Solar players who had paid for this season.

“I gave money back to my club team, but from what I hearing, I may be the only coach that did,” Stricker said. “I coach a U-19 team though, so my team was graduating out. So I took the money we had leftover in the account and just divided it up 21 ways. I thought this would be a nice college gift to these boys and families moving forward.”

The end of the DA era ushers in a new landscape for American soccer, which could include more competition on the high school level and end up increasing the overall talent on the national level in measures of long term effects.

“The DA has produced a lot of very quality players in the last ten years but it has not translated to much success for our international teams,’’ Balcom said. “I think by limiting the amount of youth teams that are playing at the highest level, the competition amongst those teams will get stronger and make some of these professional youth teams better in the long run.”