Different mediums have the same potential 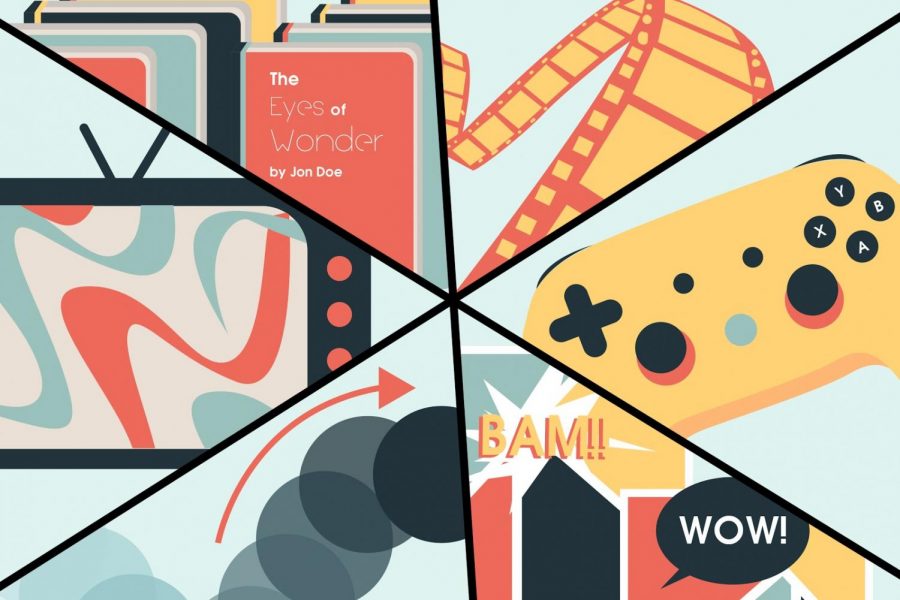 Each storytelling medium carries a stigma associated with them that limits individuals’ perceptions of their potential. The Sidekick staff writer Angela Yuan breaks down the different stigmas among different story mediums and spreads media positivity.

If I was asked what my favorite stories have in common, it would be their profundities and insight into human nature.

It would not be the medium of storytelling.

Through different mediums, I have read about a twin navigating broken relationships in the context of contemporary rape culture, watched an initially unambitious girl discover her passion and voice through music and played as a bartender in a corrupt, futuristic city working through her grief.

All mediums can tell great stories; however, individual mediums have stigmas associated with each of them limiting perceptions of their storytelling potential.

Video games find their roots in 1950s computers programmed to play solved games. While the first video games did not invest heavily into story, they transformed into ones that did, primarily through interactive fiction.

Interactive fiction, or IF, is a type of text-based video game in which players control characters and interact with the environment through text commands. IF began in the 1980s and quickly progressed into games with a strong plot focus, such as “Photopia”.

With video games incorporating story as early as the 1980s, there is no doubt it is even stronger now.

Story-rich games exploded during the 2010s, especially those by independent developers. Titles such as “The Stanley Parable”, “Undertale” and “Papers, Please” took the gaming community by storm with their unique, thought-provoking stories.

“I had a period of four or five years where I almost uniquely sought out indie games because I realized they had, for a lack of a better word, deeper stories,” CHS English teacher Alexander Holmes said. “Indie games often create more unique stories [than large corporation games], and the ones I’ve enjoyed had something that really made me resonate with it. The way [independent game studio Supergiant Games] creates a soundtrack, narrator and story that somehow seemingly make sense with the gameplay and user interface is really astounding.”

Even so, gamers are often stereotyped as lazy.

“Like every stereotype, there is truth in every cliché,” Holmes said. “People oftentimes see gaming is done sitting down, and that’s why that stigma exists.”

Books can tell stories equally as great as those in video games. Rather than being subject to the same stereotypes, avid readers are considered to be intelligent, though both books and video games have cognitive benefits.

On the other end of the media is animation, which is sometimes viewed as childish.

“Many people still think of animation as cartoons,” CHS animation teacher Cynthia Wolfe said. “Avatar was a huge breakthrough, because it is so lifelike and 3D. It was a great change in animation.”

The idea that animation is for children started developing in the 1960s with “Looney Tunes”, a cartoon series full of adult jokes and violence. When it aired on television, it was censored and rebranded as children’s entertainment, setting off decades of children’s cartoons.

Even so, there has been a continual rise of adult cartoons in the last few decades, starting with “The Simpsons” in 1989 and continuing onto “South Park” and “Family Guy”. In 2001, Cartoon Network launched Adult Swim, a nighttime programming block of adult animated shows.

Many cartoons for pre-teens balance tongue-in-cheek humor with darker themes, which may be welcome for stressed adults looking to relax after a long day at work.

Many of these patterns apply to graphic novels. Comics are associated with Marvel and DC, which are enjoyed by older audiences, but comics like “Saga” are directly targeted to adults.

The childish stigma of animation applies to eastern animation in Asia, but its use of exaggeration leads to a more negative stigma in the Western Hemisphere. Additionally, eastern animation is often criticized for its sexualization of females. This is comparable to criticizing video games for violence; they are both somewhat prominent in the medium, but do not define it.

Media positivity has a long way to go, but as creators push the boundaries of media, art and the role it plays in our culture evolves as well. Broadening the horizons of mediums is what makes them accessible to everybody and breaks down existing stigmas.

But regardless of whether it happens, I will still watch my cartoons and play my video games in peace.