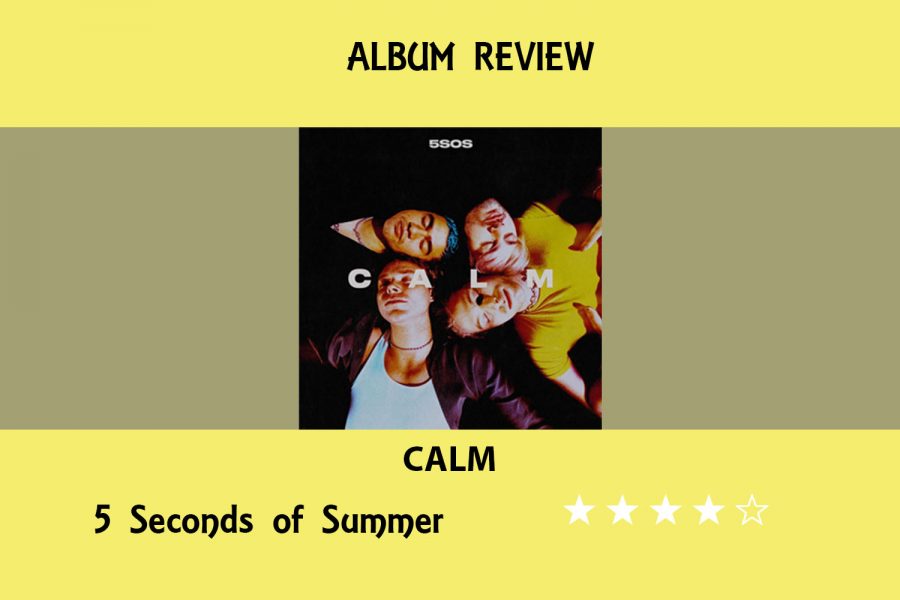 Pop-rock band 5 Seconds of Summer released its fourth album, CALM, on Friday. Upon releasing three albums prior with different styles, social media manager Anika Arutla talks about its growth through the years.

I was first introduced to 5 Seconds of Summer (5SOS) when I was 11. At the time, it was reduced to the punk version of One Direction.

Nine years later, with its fourth album release CALM on Friday, it has established its own identity in the world of pop and rock.

Its self titled debut album is the definition of teenage heartbreak while their second album, Sounds Good Feels Good stands as the opposite, with more happy, upbeat tunes. Youngblood, its third album, is more loud and angry. Contrastingly, CALM seams all of its past endeavors into an album that is most themselves.

The album opens with “Red Desert” and immediately, we are introduced to an upbeat track with smooth vocals that keeps you more at ease than riled up. This sets the tone for the rest of the album, which carries the same vibe throughout the rest of the songs.

While most of its tracks tackle the topic of love and heartbreak head-on, its single “Old Me” is refreshing as the band pays tribute to its growth as individuals and a band.

Its other singles, “Easier”, “No Shame” and “Teeth” deal with mending broken relationships, keeping the same calm theme while experimenting with different beats more on the pop side than punk. “Easier” stands out as my favorite since its initial release in the summer of 2019 largely because of how unique the last 15 seconds are.

Another unique track, “Wildflower”, which was released days prior to the release of the album, gives a taste of what was to come. As one of the only tracks on the album with a positive outlook on love, it stands out with lyrics that show the importance of embracing your uniqueness.

Though not outright positive, “Best Years” and “Lover Of Mine” carry more upbeat tunes and lyrics such as “you’re the only thing I got right”  than the rest of the tracks on the album. Focused on mending and keeping past relationships as well as growing with them, the theme of growth is evident in the lyrics, as well as the soft drums in the background.

On the other hand, the tracks “Thin White Lies”, “Lonely Heart”, “High” and “Not In The Same Way” openly scorn their lovers. Though the tracks remain with the theme, “Not In The Same Way”, “Thin White Lies” and “Lonely Heart” reference Youngblood, as there are traces of their anger in the lyrics ‘rip my heart out and leave, on the floor, watch me bleed’ and the use of climax of the music. “High” is sadly poetic, concluding the album with high notes that make you experience the pain of heartbreak and moving on.

The tracks on CALM fit the title of the album they are on, in more ways than one. Having found myself swaying more than jumping up and down, 5SOS has developed a sense of maturity with this album that brings together its past explorations in the music industry. Though not the four teenagers from Australia they once were, they have established their growth by finding their own identity.