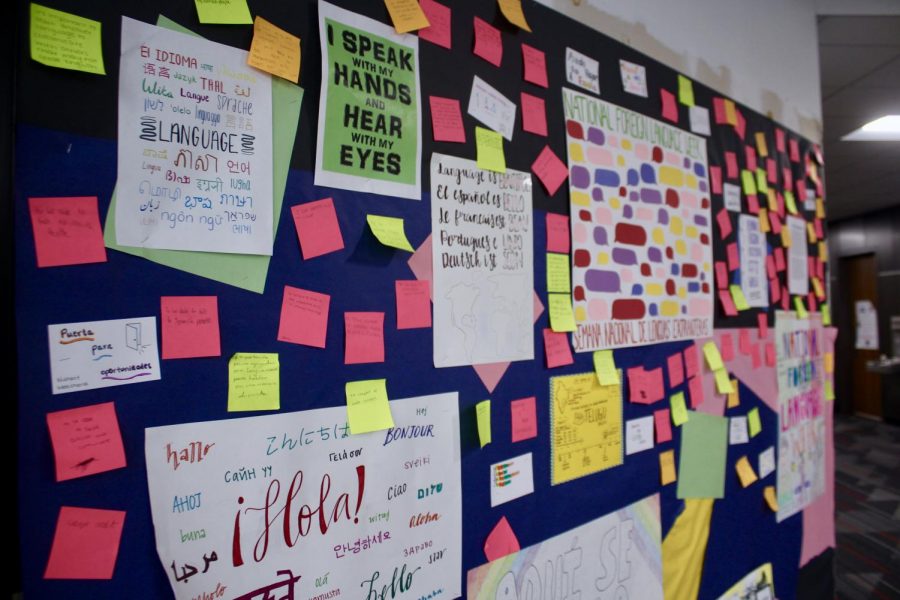 “Learning a foreign language is really important,” CHS ESL facilitator Timothy Watson said. “It helps develop the brain and helps you understand different cultures. It’s hard to learn a new language, especially when you are not in the country and in that culture. I hope students can see the value of learning a new language. They learn it now, and they can use it later.”

“[CHS] is a special place because it’s so cosmopolitan,” Watson said. “I have been to Singapore and Hong Kong [where they have] people from all over the world. We have many languages that seem like here. I hear people talking in the hall in multiple languages.”

Many posters from language classes are hung on the wall at the beginning of the language hall. Students are encouraged to write their thoughts on paper notes and put it on the wall to celebrate this National Foreign Language week.

“I can speak English, Vietnamese and just enough Spanish to say I can speak it,” CHS senior Van Anh Vuong said. “It’s a special way for me to get to know the culture that the language from, more ultimately. For example, Vietnamese shares a lot of similar words with French and Chinese. It’s the reflection of the history of [the country] being imperialized. So, [learning a new language] gives me a closer look to what the country was.”

To bilingual students specifically, this week is important as they can share their knowledge and spread the interest for learning new languages. This week is also an opportunity for them to speak up about their difficulties while learning a new language.

“[To most of the ESL students], it’s really hard on their first day,” Watson said. “We joke about how hard it is. Whenever they get here, they’re so afraid and they can’t communicate. There is no one who understands them and they don’t understand their teachers or their friends. But within a few months, they started to understand their friends so they can feel more relaxed and comfortable. It takes a long time to get acclimated.

“For the average of the ESL students, it takes them five years to get average with their classmates. One thing I tell my students is, ‘you have to study more than twice as hard as everybody else.’”

Along with being able to speak many languages, students can also have fun when practicing to speak.

“[CHS students’ languages] are so diverse and it’s actually really fun,” Vuong said. “Whenever I talk to my friends, I’m like, ‘Oh wait, do you speak Arabic?’ and then they will teach me a couple words. It’s a great way for us to all share [about each person’s language].”

At CHS, students can take Language Other Than English (LOTE) classes based on their interest. Currently, there are many language classes provided, including American Sign Language, Chinese, Spanish, French and Reading for ESL.

“I am currently learning Mandarin,” CHS junior Jordan Cohen said. “I’m so happy I chose to take it. Not only could it help me with future business, but the class has immersed me in the culture and taught me so much about customs and manners of China.”