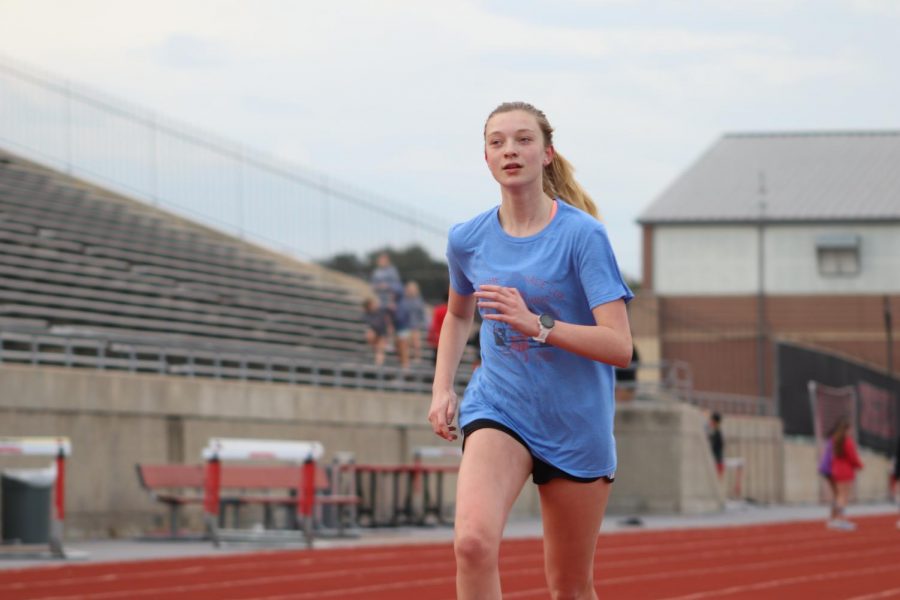 CHS9 student Elizabeth Grace Walker warms up on Wednesday morning on the Buddy Echols Field track. With her mother, Leigh Walker, as a Coppell ISD Board of Trustees member, grandmother Diane DeWaal as a Coppell High School AP U.S. History teacher and brother Coppell senior cross country runner Jackson Walker, Elizabeth Grace has strong ties to CISD, in addition to her interests in both theater and cross country.

Under bright lights and cheerful applause on stage, she shines as an emotive actress. Bounding out of the theater room, she is eager to run. Long steps in the cold air of early morning practice has become her habit.

Keeping her head up, new personal running goals are achieved.

“I first started thinking about becoming a runner because my brother is in the cross country program,” Walker said. “He is the one who made me want to start running and [seeing my own] growth and progress through all of the training. I want to keep in shape and keep up my running because I did cross country at [Coppell Middle School West]. It’s not really the same thing, it’s a different sort of field but I really like [Coppell coach Nick Benton] and the program.”

During summer training, cross country runners got to know each other and learned more about the program.

“I met Elizabeth Grace when we were really young because our moms [Leigh Walker and Stephanie Schuller] were really good friends at [Coppell High School] and [Texas A&M],” Coppell freshman track runner Sky Schuller said. “She is super sweet, I can always count on her. She is [also] a really good teammate and always willing to help out with schoolwork and cheer us on at our sports stuff.”

After running at daily practices except for Sundays and almost every Coppell meet this year, Elizabeth Grace has ranked in the top 20 of the District 6-6A JV division. To her, the biggest achievement is how much she has improved since her first time running.

“My brother runs cross country and my dad [Ray Walker] is a tennis player,” Elizabeth Grace said. “My little brother [Pinkerton Elementary School fourth grader Hogan Walker] might do it too, so it’s kind of becoming a family thing. A lot of my friends are in cross country and they support me a lot in the way they encourage me. I have friends who are in track and field as well so they don’t necessarily run long distances, but they are very supportive of what I do and they understand what it is and how it is to run.”

Besides her improvement in running, cross country has also benefited Elizabeth Grace’s dedication and daily routine, giving her a mindset of pushing for a greater goal and challenging herself.

“[Elizabeth Grace’s] sweetness of spirit and just a real dedication to achieving goals [makes her unique],” Coppell High School AP U.S. History teacher Diane DeWaal said. “She is very motivated [and] diligent. She works very hard and seems to embrace challenges with a spirit that doesn’t bring her down but motivates her to do better.”

Elizabeth Grace has a background in many different areas, including running cross country and track and field, acting in theater, dancing, doing gymnastics, playing soccer, playing the piano and playing volleyball before high school.

“Elizabeth Grace is a kid that is an amazing lead, hard worker, persistent,” CISD Trustee Leigh Walker said. “I often say that she is sweet not weak. She is one of the strongest people that I know. I try to make sure she knows that she is loved and supported. I’m not here to run for her, but I’m here to support her through it. I do try to [listen to her].”

In a less competitive environment, Elizabeth Grace surrounds herself with the arts by lighting her acting dream in TakeOne theater, an audition-only advanced theater class for freshmen. Walker gets to understand more about herself and socialize with many people.

“I started theater in sixth grade,” Elizabeth Grace said. “I don’t really know what got me interested in it. It’s funny because we did ‘Newsies’ this year, which is my favorite. I watched its live version over and over again [until I] knew all the songs by heart. And then I went and saw ‘Wicked’ in Dallas and I just fell in love with [theater]. So in sixth grade, I took Theater A and I was like ‘this is going to be my thing I’m going to do it’. And it was a really great experience all through middle school, so I wanted to continue it.”

With her mother a Coppell ISD Board of Trustees member, grandmother as an AP U.S. History teacher at CHS and brother on the cross country team, Elizabeth Grace was born and raised in this town, seeing the development of the city through her own eyes.

“Even in my 15 years on this earth, Coppell has changed so much,” Elizabeth Grace said. “When I was 8 or 9, Old Town Coppell [was built]. There have been so many new opportunities that have been given to us or are available to us because we’ve gotten a bigger town which has been really nice.”

As the third generation of her family, Elizabeth Grace expects to return to Coppell when she starts a family.

“My mom’s on the board,” Elizabeth Grace said. “Jackson goes to school here. And having my grandma teach AP U.S. History at CHS is really nice because I knew the expectations going into high school. They’ve been such guiding hands, and especially having people involved in [CISD] makes me feel more connected and more motivated.”