Boys soccer puts end to winless streak, looks to redeem itself in second half of district season 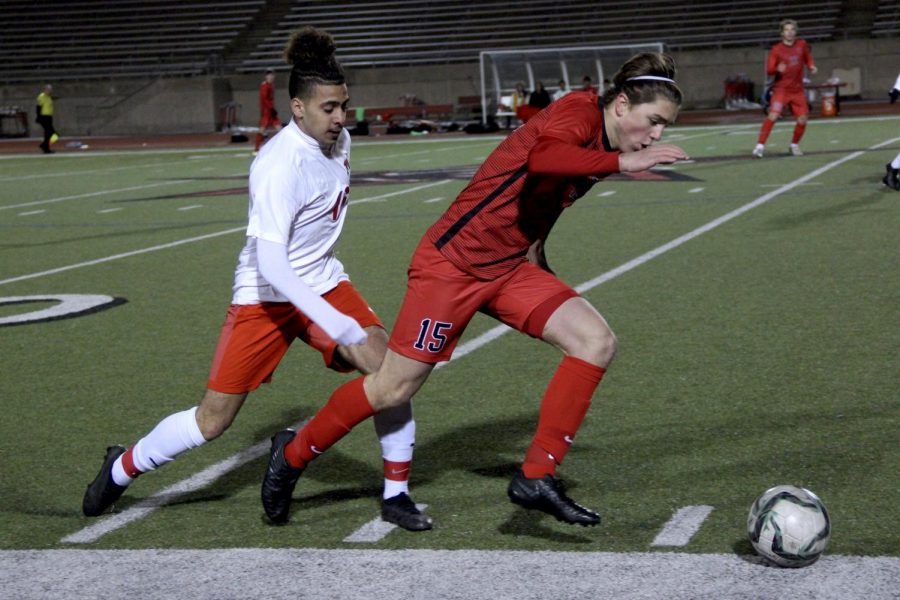 This was not where the Cowboys had expected to find themselves halfway through the District 6-6A season.

Stepping into the season with high aspirations, the team stood 1-4-2 and second to last in the district standings before the match. Set to play the only team below it, Irving MacArthur, they were itching for a win. This was not just a normal district match, this was the match the Cowboys’ were hoping to start turning their season around.

Though Coppell had a shaky start, it ultimately came out on top with a 2-1 win, pushing it closer to the top four playoffs spots.

For the most of the first half, MacArthur dominated the field, landing several shots on goal. The problem with the Cowboys was more so in the formation than in individual performances.

The Cowboys walked onto the field with a 3-5-2 formation, which turned into a 5-3-2 when playing defense. The team had trouble working with the relatively new formation which led to defensive slip ups. The formations also gave Coppell troubles when it came to sending balls forward as midfielders tended to stay back, leaving a gaping hole between them and the offense.

However, the team changed to its classic 4-3-3 formation in the second formation which gave it the results it needed.

“We dropped to four in the back and put two center backs,” Coppell senior center back Nathan Hernandez said. “Before, we were playing three in the back and we wouldn’t be able to commit out wide to the ball… Because of having several center backs, we didn’t know when to commit to the ball or when to draw and that killed us because we were getting destroyed by three guys on each of the sides just passing up one by one.”

“Working collectively as a team in the second half really gave us the boost we needed,” Razo said. “Most of our slip ups were because of the lack of communication. Once everyone started talking in the midfield and having like our defense starting to communicate with their middle. We actually started to get back on track.”

MacArthur took an offensive stance in the final minutes, but only scored its first goal with only 30 seconds left in the match, leaving the score 2-1 at the final whistle.

Coppell was in a similar situation last year, where it stood at sixth place with a 2-3-0 record around half way through the district season. But in just a span of six matches, of which it won five, it shot up to the very top of the district. With last night’s win being its first win in the past six matches, Coppell hopes to once again bounce back the second half of the season.

“A lot of this year’s had a lot of the same feel, the Nimitz loss earlier this week hurt.” Coppell coach James Balcom said. “But we know this district is incredibly tough. And we’re seeing everybody’s beating up on everybody, outside of Marcus. We have played everybody tight, but we have struggled to get the results so maybe this is kind of what changes it.”

The Cowboys play at Hebron, which is at fourth place with a 2-2-4 record, on Tuesday at 7:30 p.m., a win could possibly put the Cowboys very close to a playoff spot.