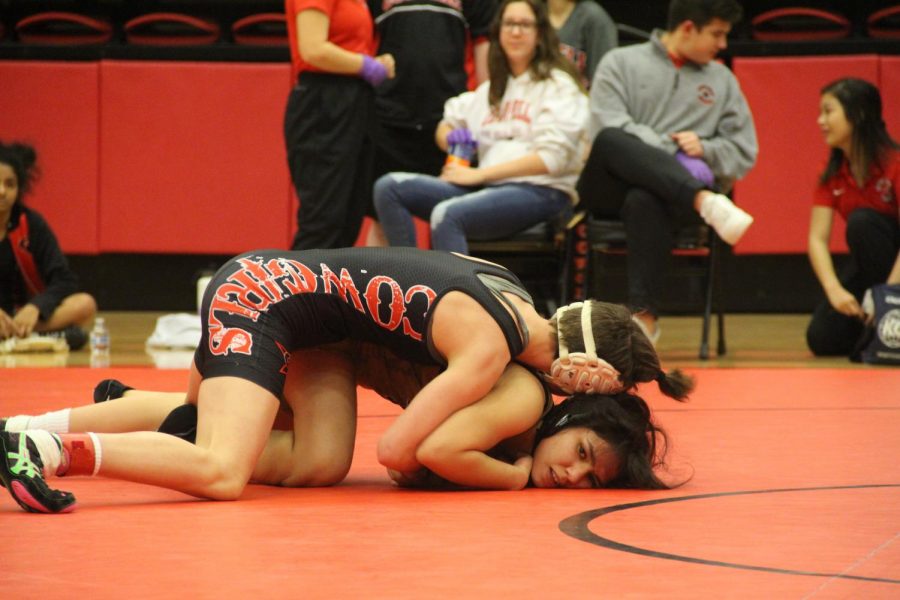 Coppell freshman Scout Carrell tackles Huitron Genesis from Keller Fossil Ridge on Jan. 30 at the CHS Arena. Four girls and one boy from the Coppell wrestling team advanced to the UIL State Championships on Feb. 21-22 in Houston.

On Friday and Saturday, the Coppell boys and girls wrestling teams competed at Allen High School for the UIL Class 6A Region II Championships. The girls’ team finished third overall and had four state qualifiers, and Coppell senior Jackson Briscoe placed third in the 170 pound weight class, advancing him to state as well.

Coppell brought a total of 10 girls and eight boys to Allen and competed amongst 37 other teams. Coppell junior Hannah Francis remained the undefeated champion in the 215 pound weight class after conquering state-ranked freshman Valerie Ramos of Killeen Ellison. Coppell sophomore Maria Husain placed fourth in the 95 pound class, and freshman Scout Carrell, who placed fifth, won a challenge match that advanced her to state as well.

“The stakes were a lot higher [at regionals],” Briscoe said. “You’re no longer wrestling for just a medal or just your record. We’re talking about wrestling for being able to continue the season because once you’re out of this, your season’s over.”

The UIL State Wrestling Championships is Feb. 21-22 at the Berry Center in Houston.

“This is the end,” Briscoe said. “When you’re going to state, it’s just really giving it your all and wrestling as long as you can. Everyone bites equally hard to get there, so there is no leeway. This is the time for everyone to try their hardest. ”