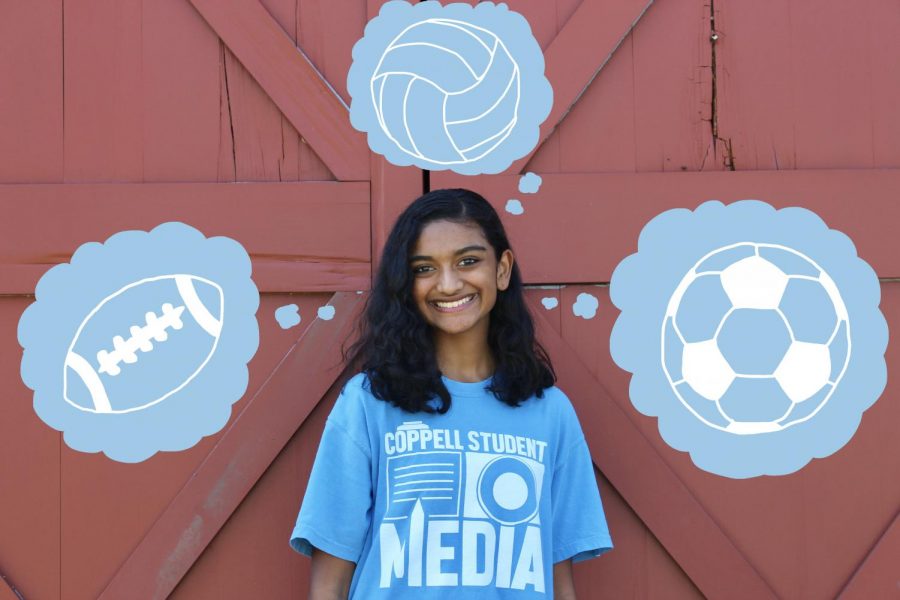 Today is Student Press Freedom Day, a day which recognizes the rights of student journalists. The Sidekick executive sports editor Sally Parampottil explains the role of sports reporting in her changed perception of student athletes. Photo illustration by Bella Mora.

Along with the privilege of being part of the media, I also have the honor of covering sports and telling the stories of athletes. In doing so, my perception of these talented elite individuals has changed.

Originally, the idea of speaking to student athletes, even interacting with them at all, was terrifying. Though a part of me always knew, of course, they were not professional athletes, something about the concept of writing about them was daunting.

Cue my entrance to the sports section. Media access (being able to stand on the sidelines and using the right to post-game interviews among many other benefits) brought me face to face with the subjects I once considered intimidating.

While being in closer proximity to these athletes while they work on and perform their craft, it becomes more clear that these kids are still just that: kids.

The degree of separation when viewing sports from the bleachers has always made my observations of athletes, unfortunately, much more detached. I see figures on a field performing tasks they have been training for. While I am always vaguely aware these figures are humans, students, even classmates at times, that personal connection gets washed away in the tides of screeching and hollering of other spectators.

When I am on the sidelines, it all changes.

I can hear the words from teammates on the bench as they cheer for their companions and empathize when things are going south. Suddenly, I see the nuances of the people I am reporting on – the emotions they feel at every moment and how they choose to display them.

A loss from the bleachers may just seem a result of being out skilled or not playing to the level expected and making a series of dumb mistakes. Standing closer to the team, it may still be those reasons, but it suddenly feels more whole of a story, not just attributing it to one reason or another from a seat high above the field or court, but seeing things at the same level as the athletes themselves.

It is as though the barrier between being a spectator and reporter is crossed at the change of vantage point. Standing right where the action happens, emotions are practically contagious. I get to witness the sport in the eyes of the players rather than in the eyes of a fan.

I have seen tears streak down cheeks after the most exciting football game I ever covered and grins wider than physically possible when one of the first freshmen on the boys varsity soccer team since 2011 scored the last-minute winning goal on a free kick to defeat the former state runner-up.

Even during interviews, the wide range of emotions are surprising. Athletes may compose themselves before they find their friends and families afterward but straight off of a team huddle when I interview them, I still grasp the true emotions felt in the moment: the joy, the pain, the grief, the triumph.

With the freedom of the press and all which comes from wearing my Sidekick ID, I am able to capture the details of people and events beyond what I could ever hope to witness up in the stands. As I compose every bit of coverage, every feature story, I end up using the emotions cemented in my memory as motivation.

Truly, there is no better way to write.