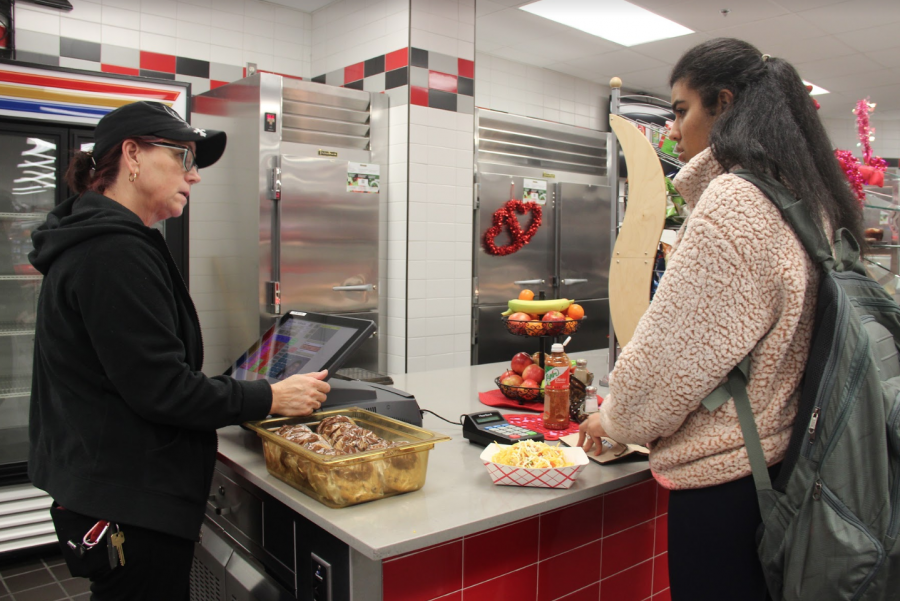 Coppell High school lunch lady Tarja Kuvaja checks out senior Lalitha Turaga during A lunch on Monday. The Child Nutrition Department sets prices for the products in the C-store to reimburse the department. Photo by Neveah Jones.

A bag of Cheetos costs $1.75 at Coppell High School’s convenience store (C-store). At Walmart and other department stores, these bags of Cheetos can be bought in bulk, with a pack of 40 costing $12.27, each bag costing $0.31.

A 303.23% markup from the store price raises the question of where the profits seen by the C-store and cafeteria for all products go.

“I worked at a school store in another school, [Bryan Adams High School in Dallas ISD], and we had revenue of more than $100,000 within a year and I imagine that here, the C-store is comparable,” CHS marketing/business teacher Richard Chamberlain said.

The total local and intermediate revenue of the 2018-2019 school year, which covers the costs from all cafeteria sources, was $4,262,572. The revenue is not singled out based on location.

According to administrative director of child nutrition Amy Curry, the profits made from the convenience store and cafeteria are used to fund the expenditures of the Child Nutrition Department at Coppell ISD.

“[The profits] allows us to purchase high-quality food and replace old equipment such as ovens, steamers and dish machines,” Curry said. “[The Child Nutrition Department] is also responsible for paying our own salaries and utilities.”

Reconstruction of the cafeteria and construction throughout the school was funded by bond. However, the expenses of replacing or purchasing equipment such as a freezer truck are covered by the Child Nutrition Department itself.

The high-quality food cited by Curry can be best described as more restaurant-like food than the typical school lunch menu, with meals from popular food chains such as Chick-fil-A and Cici’s Pizza being offered.

“For our high-quality food, instead of food like chicken nuggets that are cheaper, we use whole muscle chicken, better produce and in general use products that cost more than normal food items,” CISD dietitian/menu planner Alicia Braun said.

Though the Child Nutrition Department is a branch under CISD, it is almost its own entity. The department heads or leads work full time; however, many workers within the department work anywhere from four to six hours a day.

These workers still are a part of CISD, but they are paid through the Child Nutrition Services and can pay into the Teacher Retirement System of Texas (TRS) to set aside for retirement.

“There are professional employees, who have a degree, who are paid according to that degree and there are those who we call para-professionals who are people we hire to work in our buildings in different areas,” CHS Principal Laura Springer said. “You get paid more if you have a college degree than you do if you don’t, but it is not on the same scale salary as a professional or teacher.”

CHS moved to its current campus in 1989, and the C-store was established a few years afterward.

“When they first decided to get [the C-store], it was put in so it could sustain our cafeterias,” Springer said. “When I was here for the first time, my first 22 years here, when they first brought that store in, kids were thrilled. It’s like having a 7-Eleven on your building. They want to buy stuff and say, ‘Ms. Springer, do you know how much this costs?’ but [the Child Nutrition Department] gets to set those prices because they are their own organization.”