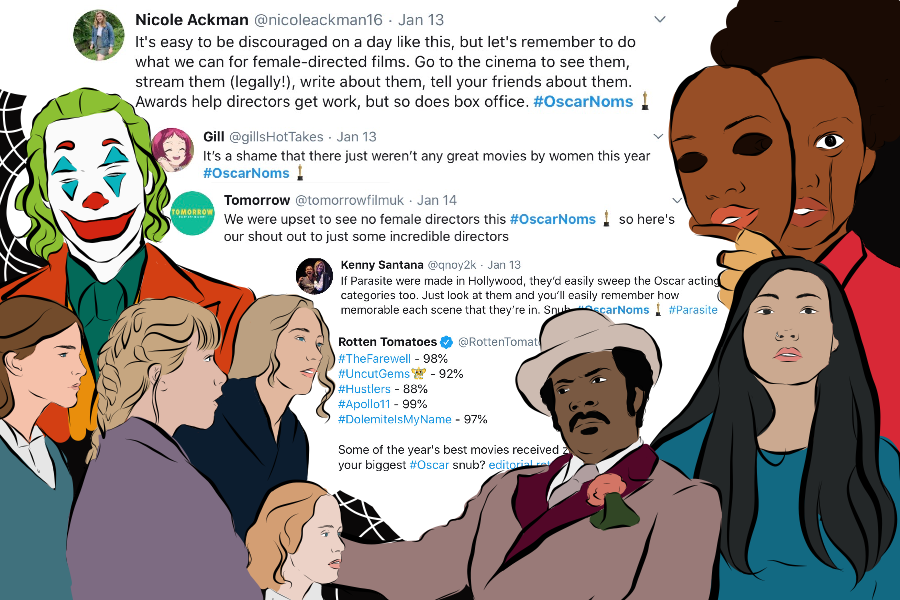 Oscar nominations were released on Jan. 13. The Sidekick staff writer Camila Villarreal analyzes the lack of female directors and the industry’s decisions behind the nominations.

Twitter became an active landmine on Jan. 13 as the long-awaited nominees for the 92nd Academy Awards were announced by actors John Cho and Issa Rae that afternoon.

For many, 2019 was a great year for good films. Hollywood brought us The Dead Don’t Die, a chilling satire of the cliche of zombie apocalypses, IT: Chapter Two, the long-awaited second half of Stephen King’s iconic book about a murderous clown and my personal favorite, Booksmart, the hilarious story of two shut-ins who try to make up for all the fun moments they missed focusing on school.

Despite all these amazing movies, the Oscar nominations seemed to recycle only a couple films from recent months. Joker stole the show with 11 nominations, with Once Upon A Time In Hollywood and The Irishman right on its heels with 10 nominations. Every movie nominated except for Once Upon A Time in Hollywood was released after late August. The rest of the year’s movies were, for the most part, ignored, which is a shame, because if this had not been the case, we would have seen not only a more diverse selection of films on the list, but a more diverse group of people nominated for best actress, actor and director, such as Alfre Woodard, Sterling Brown and Céline Sciamma.

Speaking of directors, there were no women nominated for the second year in a row. The Academy blew by Greta Gerwig for Little Women, Lulu Wang for The Farewell and Marielle Heller for A Beautiful Day in the Neighborhood for Best Director. Each of these films is critically acclaimed and has received multiple awards throughout the year. To ignore these women for Best Director is to demote and disregard their accomplishments and immense amount of talent.

That’s another thing. The list of actors and actresses nominated for awards was unnecessarily white-washed. Of course, one could argue that this is not the Academy’s fault – they just chose who, in their expert opinion, was best suited for the role. But there are people of color who deserved to be up there too. Beyoncé for her song “Spirit” in The Lion King, Lupita Nyong’o for her chilling performance in Us, Awkwafina and Zhao Shuzhen for a performance so touching in The Farewell, it brought my mother to uncontrollable sobs and Eddie Murphy for his role as the movie legend Rudy Ray Moore in Dolemite Is My Name.

The 2020 Oscar nominations have me sorrowfully disappointed. I saw so much potential in most of the movies I watched last year. Twitter is angry, entertainment news is angry and I feel so, so let down. Let’s hope next year is the year for female directors, talent across races and more international films to have their well-deserved spot on the nomination list.