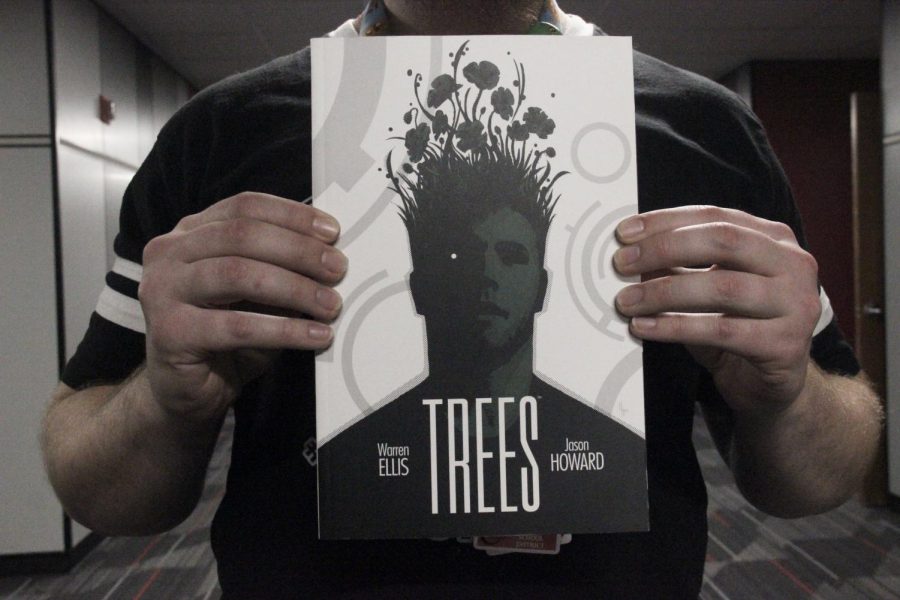 One of Coppell High School AP English IV teacher Alexander Holmes’s comic book favorites is Trees by Warren Ellis and Jason Howard. Holmes is passionate about storytelling, art and comics and is excited to teach a comic book class next year that can be selected instead of other English core classes.

With his walls covered in Frankenstein and Marvel posters and his bookshelves overflowing, Coppell High School English teacher Alexander Holmes’s devotion to storytelling becomes crystal-clear the moment one walks into his classroom.

Now, he is using that devotion to launch a new English class – a version of English IV that utilizes graphic novels instead of traditional literature.

A lifelong fan of comics, Holmes began brainstorming this class many, many years ago, while in his master’s program at Trinity University. Teaching American Born Chinese by Gene Luen Yang during a unit on East Asian Literacy helped spark the idea.

“I was teaching freshmen, but even so I realized the richness of graphic novels, and understood the level of analysis that applied to them could be just as interesting as it is on any literary work,” Holmes said. “[I’ve been interested in comics and graphic novels] as long as I can remember. I started getting into superheroes when I was really, really young. I grew up with the Spiderman and X-Men cartoons when they were coming on the TV. Then as soon as I realized that Barnes & Noble had a comics and graphic novel section – probably when I was in fifth or sixth grade – every time I went to a bookstore, I was looking for that.”

In addition to fans of comics, those who are not as passionate about reading may also appreciate the class, as pictures often make stories easier to understand.

“When you get all the way to your senior year, and you don’t necessarily enjoy reading complicated texts, [Holmes] is opening up the world of reading complicated text in a different light,” CHS associate principal Melissa Arnold said. “People who struggle with reading or like to read graphic novels, or just want to take a different approach to learning English, are really going to appreciate and get excited about this course.”

As all high schoolers need a fourth credit of English to graduate, Holmes’s new class will be an alternate way to provide that. Open to all seniors, it will earn students an on-level GPA weight.

“[The class] will be really interesting,” CHS instructional coach Deryl Lee said. “[Holmes] is really passionate as a teacher, so I think just listening to him describe what the graphic novels were like – and how he was going to use them in class – was enough to ignite my passion, and make me interested in wanting to pick up a graphic novel.”

Lee helped him secure grants to fund the class, including the PTSO grant and Coppell ISD Education Foundation grant.

The list of graphic novels Holmes’s class will study has already been approved, and his favorite on it is V for Vendetta by David Lloyd, Alan Moore and Tony Weare.

“I’ve been [picking books based] on what is regarded as the canon of graphic novels, based off college courses and curriculum I’ve familiarized myself with, as well as comic books I’ve read on my own and believe have worthwhile literary merit,” Holmes said. “I’m getting excited about [V for Vendetta] already, because I’m teaching 1984 in class, and they’re very, very similar stories. It’s a really, really powerful work and it’s all-too-relevant for the time we’re living in right now.”

Although some regard comics as less impactful than traditional literature, Holmes thinks this stereotype has been decreasing in recent years.

“From the advent of the popularity of comics back in the ‘60s or ‘70s, up through the ‘90s, it was an entertaining medium, and not too many people thought that much more of it,” Holmes said. “But as we have become a more evolved species, we do realize that even works such as SpiderMan and X-men have great societal implications, be it talking about responsibility, class or race warfare and everything else in between. Even those that use to be regarded as ‘kiddish’ are now being appreciated with a more mature tone.”

Because he has never designed a curriculum completely on his own, Holmes has found navigating that new path somewhat challenging. However, multiple students have already approached him with questions about the class, meaning he is not too concerned about marketing it to obtain interest. In fact, he is strongly considering recruiting other teachers to help him teach the class.

“[This class] is going to change lives,” Arnold said.