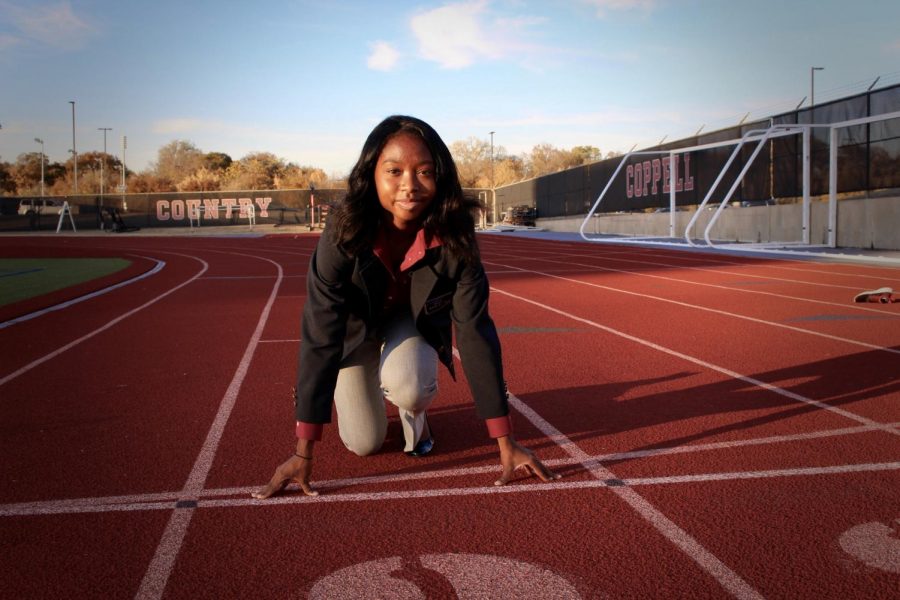 New Tech High @ Coppell senior Sikyra Castle is not only on the Coppell varsity track team, but also in DECA as the state president. Castle hopes to pursue business after she graduates from high school.

“Right after I gave my state officer acceptance speech, I started bawling my eyes out, because I knew that at least one person had been inspired by what I said,” Castle said. “I definitely feel like I’m doing something greater than myself.”

Castle started participating in DECA, an international business and marketing organization for high school and college students, freshman year. Initially, she was attracted to the idea of going on trips and looking for something to get involved in, but DECA proved to be a driving force in her life.

“I had no idea I wanted to pursue business,” Castle said.  “I just wanted to find a way to get involved, and I felt so involved when I went to the first meeting.”

In February, Castle was announced as the president for the DECA program in the state of Texas after spending her sophomore and junior year as District 11 president, which consists of Dallas and Rockwall Counties. As president, her biggest role is to support the rest of the state officer action team, which consists of five other DECA students from around the state, as well as to speak at different national conferences to represent the state.

“I feel an immense pride in Sikyra for seeing a goal and accomplishing it,” DECA advisor and business educator at NTH @ Coppell Kirstin Pertrunin said. “There are very few students who can give their all to a goal. It’s easy to take the simple way or to make excuses, but Sikyra never does that.”

State officers are elected every year in February, and the state president for the 2018-19 year was Oliver Shi. Castle is the first female DECA state present in seven years, but her achievements extend beyond that. Castle attended the Yale Young Global Scholars program this past summer, a highly selective academic leadership program for high school students all over the world. Students concentrate in different fields, participate in projects and experience life in the dorms at Yale University, where Castle decided to launch a financial literacy awareness project.

The financial literacy project stemmed from Castle’s desire to leave a lasting impact on the community. The project is directed towards educating the seniors in New Tech on how to pay for college, and looks at credit, debt and student loans. Castle plans to launch a podcast to prepare the senior class for their years in college this month.

“Our economy is changing, and knowing about finances is the backbone of our world,” Castle said. “It’s important people know how to manage their money. We don’t have any programs [in school] to learn about how to pay for college and to look for scholarships. This is a way to help the education system improve and provide more resources we don’t already have now.”

Castle was selected as an alumni ambassador for the YYGS Program this past October by communications officer Melissa Dwelley. Along with DECA and her financial literacy project, Sikyra has been involved in Coppell track since seventh grade. Despite having so many things to juggle, Castle has nothing but a smile on her face.

Paschall serves as Castle’s mentor in the Coppell-based Christian organization Coffee Talk, where mentors and mentees are paired together to connect about their faith. Paschall and Castle have been paired together for two years now.

Students, too, have nothing but praise for Castle’s efforts.

“She’s somebody we all look up to [in DECA],” NTH @ Coppell sophomore Faiza Rahman said. “She’s so dedicated. And even though she has such high academic success, she’s still relatable once you talk to her. She’s as good a leader as she is a friend.”

Ultimately, Castle’s biggest goal is to give back to the community.

“[Presidency] is very, very stressful,”  Castle said. “It’s like an unpaid job, but I don’t regret it. I want to give back to the community, and DECA allows me to do that. I want to inspire other young girls, especially young black girls, that they can do it too. They can run for state president too.”