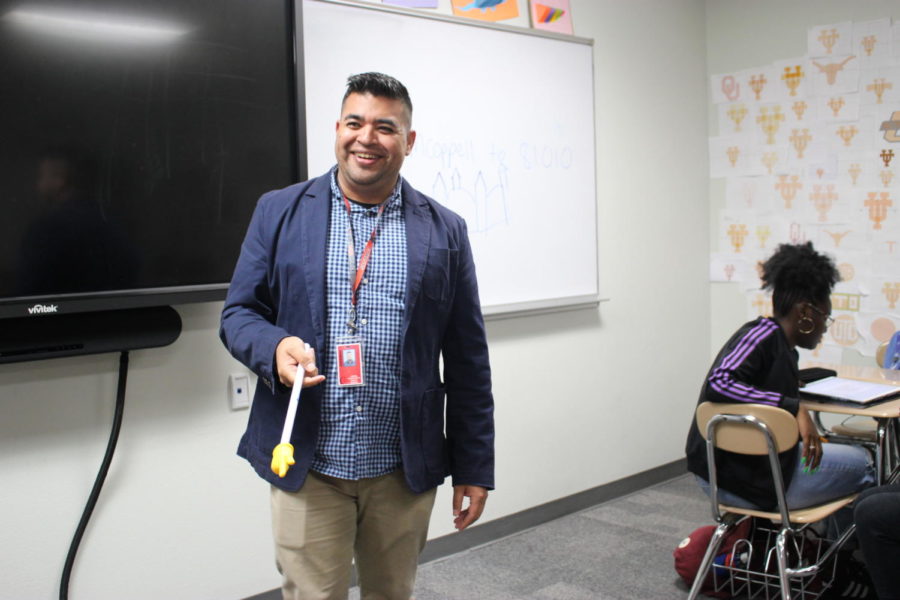 Coppell High School Spanish teacher Señor Becerra leads a classroom discussion regarding Spanish literature with his third period AP Spanish V class. Becerra is a new teacher at CHS and is in charge of the National Spanish Honors Society.

Coppell High School Spanish teacher José Armando Becerra grew up in the small central Mexican town of Puebla, southeast the capital of Mexico City, raised by a single mother in a rental house being the fourth of five children.

“Even though I was from a little town, my dreams were pretty big,” Becerra said. “I was aware we were poor, and I didn’t want that to be the rest of my life.”

Becerra is a new teacher at CHS, teaching Spanish lll and AP Spanish Literature. Moving from San Diego to Dallas, Becerra has added his experience to his teaching. Fellow CHS Spanish teacher Eligio Mares helped Becerra with the transition to Coppell by mentoring him.

“Unlike most, he’s the only [Spanish teacher] actually born and raised in a Latin American country, so he has a lot of knowledge,” Mares said. “I really, really appreciate him sharing some of those experiences where even I can learn.”

Growing up in an economically challenging environment, Becerra started working at 9 years old. At age 15, he was the manager of two tortilla factories with 10 employees.

Even while working, Becerra still excelled in school being persistent in the things he wanted and saw how education opened doors for him. After receiving a full scholarship to the Seminario Teológico (Theological Seminary) in Baja California, Mexico, Becerra pursued a bachelor’s degree in pastoral studies as well as two minors in Christian education pedagogy and apologetics.

“My whole background and studies has to do with literature in one way or the other,” Becerra said. “Spanish literature gives you an insight about the culture and evolution of Hispanic culture. Our literature, our books are a reflection of our society.”

After graduating, Becerra continued his education

even further, graduating with a master’s degree in Arts and Biblical Studies in Southern California Seminary, requiring him to immigrate to the United States in 2002, a difficult transition.

Although education opened doors for Becerra, the language barrier closed them.

His dedication—whether by working the drive-thru at Wendy’s, watching TV with English subtitles, reading The Chronicles of Narnia in one hand with an English dictionary in the other or having his wife (who was fluent in English) spelling things out phonetically—allowed him to become proficient in English after two years of total immersion.

Becerra relates his past experiences with the struggles of learning a new language to develop a new level of empathy and compassion for his students and brings a human side to language learning.

“I understand what it is [like] to be judged because you didn’t pronounce the word the right way,” Becerra said. “I understand how frustrating that can be. [But] I was able to do it, [so] you can do it.”

Becerra got his first official job as a Spanish teacher around five years ago after initially coming in as a volunteer once or twice a week at his son’s private school due to the lack of Spanish teachers that year.

“The next year they hired me to teach every single class from kindergarten to seventh grade,” Becerra said.

“We all have different styles of learning, and I try to apply that to my classroom,” Becerra said. “[Instead of] coming from the concept of grammar and explaining the grammar and trying to put it into practice, we practice first and then I give the concept.”

Becerra moved to Coppell the day before school started, but that didn’t stop him from developing a love for Coppell.

“One of the surprises for me was the quality of students that we have at CHS,” Becerra said. “I love the diversity that is in our classrooms.”

Having a profound reserve of knowledge makes Becerra very qualified to teach his Spanish literature classes. He attributes that to not only being familiar with the texts he studied in college, but on his own as well as, being an avid reader his entire life.

“He’s very encouraging,” AP Spanish Literature senior Valentina Grijalba said. “He really takes his time to read the whole [literature reading passage], and if anyone is not understanding, he repeats it. It’s difficult to find a teacher that enjoys teaching every single day.”

Becerra is not only passionate about teaching, but is also responsible for the National Hispanic Honor Society. They are currently organizing a toy drive to donate to the children of Gonzales School for Young Children in Denton.

“For me, it’s close to my heart,” Becerra said. “Growing up, sometimes we didn’t get presents for Christmas. I want to be able to say that as an honor society, we are going to be that special person to deliver presents to those kids.”

Outside of teaching, Becerra enjoys landscape design, has a realtors license and an extensive background working with non-profit church organizations. He also has a wife and two kids, a 12-year-old son and a 10-year-old daughter who he enjoys spending his time with.