On the Spot: A Hall welcomes students back to refurbished classrooms 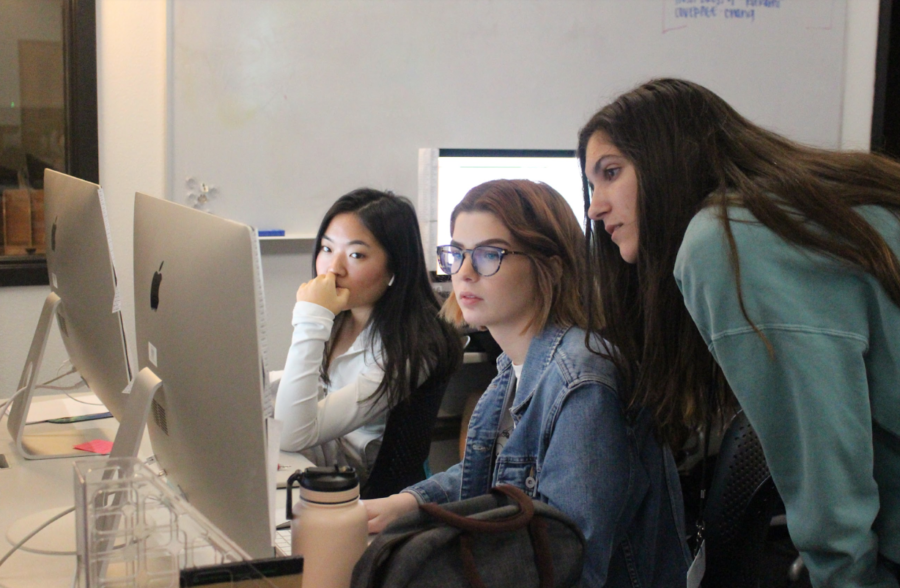 Coppell High School seniors Kylie Park, Molly Irland and Anna Guzniczak work on a page during Round-Up yearbook in seventh period today. Renovations in A Hall have been completed, and classrooms previously displaced have been moved back to their original rooms.

With the tarp uncovered, previously displaced students returned to their original classrooms in Coppell High School’s A Hall, passing the torch of renovations to C Hall directly across from them. Health Science Theory and Clinical, Round-Up yearbook, Student Services Central have reopened their doors.

“We had to move all of our equipment and all of our technology and everything else in our room, so it was a struggle trying to find a room that was big enough for us,” said Maddie Hall, Round-Up managing editor over people and seniors

The renovations lasted around four weeks and included repainting the walls white.

“People don’t realize that it is a production to just move from one class to another with yearbook with all the setups,” Round-Up long-term substitute Nan Fullinwider said. “So, it’s been a little overwhelming with deadlines. But, with a little bit of patience and determination, I’ve pretty much gotten the room somewhat back into shape. I still probably have another week to two weeks to put other things together. But what’s important is that the team is back together in their classroom and it’s beautiful.”

As a long term substitute, Fullinwider found the transition from leaving the initial room to B109 difficult.

“[Transitioning] was hard because I’m the long term substitute and there has been many years of collecting,” Fullwinder said. “I found stuff from 1990 when [Coppell ISD Superintendent Brad Hunt] was teaching here at the high school.The transition of moving out and cleaning out was a big taking on for me because I wanted to make sure that I didn’t discard the things that should’ve stayed here.”

As A Hall reopened, C Hall has begun reconstruction. The new locations of these classes have been posted on the board in the main hallway.

“The school is so large and trying to find your spot [is challenging], but once you do that for a week, then it’s really not that big of a challenge,” Mares said. “The classroom set up is something to get used to as well because sometimes we have issues with trying to get our computers to connect with technology.”

Some teachers find the new renovations foster excitement throughout the school.

“In one of the classes, a new classroom that I had to go to yesterday, I can’t explain it, but there was a new sense of positive energy from the students,” Mares said. “They were more willing to participate in the class, so I think that something fresh is always good.”