A minute to fame 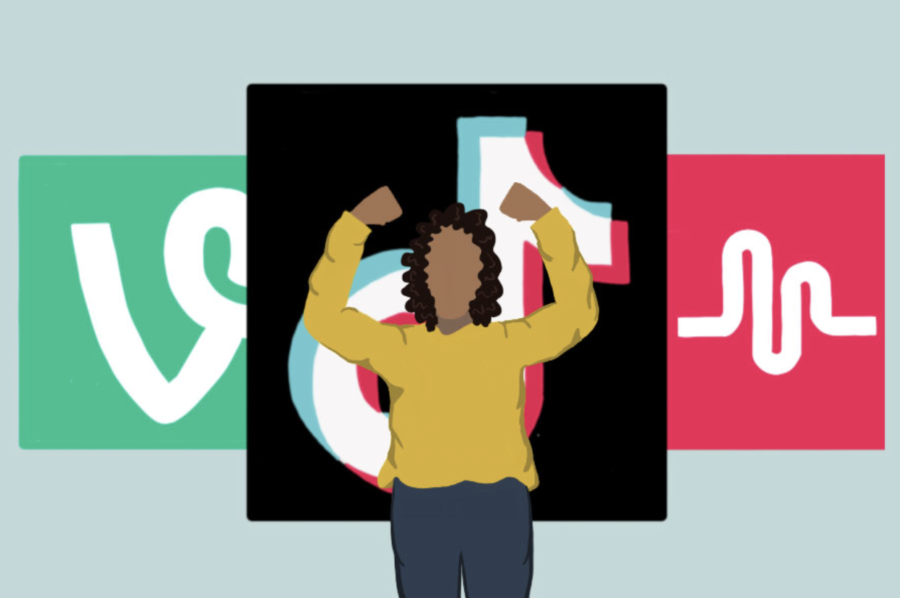 TikTok is a social media app that lets users post 60 second videos with music. Because of this style of posting, many artists have discovered popularity and many creators at Coppell High School have gained followers. Graphic by Bella Mora.

Without skipping a beat, someone finishes the song with “Real real rare like Super Saiyan manga.”

In 2017, a lip-syncing app known as Musical.ly rebranded to form TikTok, a social media video app. However, only recently has TikTok transformed from a lip-syncing platform to one with content varying from comedy to dance routines.

For some users, TikTok is where they explore new genres of music. Likewise, artists can increase their exposure through the app.

One song Coppell High School junior Presley Abercrombie found through TikTok is “Trampoline” by Shaed, which was released in 2018.

“I’ve definitely found different kinds of genres and music I like and new artists I’ve never heard of,” Abercrombie said.

Lesser known artists, such as Shaed and Lizzo, have been brought into the limelight through videos that feature these songs as background music. Lizzo’s transformative single “Truth Hurts” was released on Sept. 19, 2017; however, Lizzo reached No. 1 on Billboard Hot 100 in 2019.

Although TikTok and Musical.ly are essentially the same, what attracted more users to the app after the rebranding is its ability to essentially replace the now extinct Vine.

Vine is an app that ran from 2013 to 2016; it featured short six-second videos that were primarily comedic in nature, appealing to teenagers’ ever so short attention span. After the app’s closure, creators transferred their content to YouTube, with popular Viners such as David Dobrik accumulating more than 6 million followers on that platform.

YouTube, unlike Vine, is a long-form video platform, as there is no restriction on the length of content that can be uploaded. But short-form content is resurging, as users are limited to only a minute in TikTok. Recently, popular creators, including Dobrik, have started to post videos on TikTok.

“Since Vine got deleted, a lot of people are trying to use TikTok like [it is] the new Vine, which I love because I was really into Vine,” Abercrombie said. “I downloaded TikTok as a joke to make them for fun because my friends [and I] used to make Musical.lys. Then, I started watching TikToks, and there were these trends I wanted to do.”

Abercrombie (@psaprockyxoxo11) creates dance and comedy videos and has garnered more than 38,000 followers.

Coppell High School junior Neil Upreti (@ynwnellyyy) also creates videos on TikTok, though, his reasoning for doing so is different.

“It was cringy at first, but my friends were making them and they got around 25,000 likes,” Upreti said. “Although I didn’t want to join TikTok, I wanted to show I can do better than they did, so I started using it out of competition.”

Upreti has now garnered more than 4,000 followers with his most viral videos gaining more than 123,000 likes.

In our fast-paced world, quick videos that require minimal attention seem to be the perfect form of entertainment. One click led to another, and another, and within a day, 15 year old Charli D’Amelio amassed more than 2 million views on a 15 second video. A simple tap hurled her into instant fame. With the allure of a quick chance at fame, TikTok may surpass the success of its predecessors.