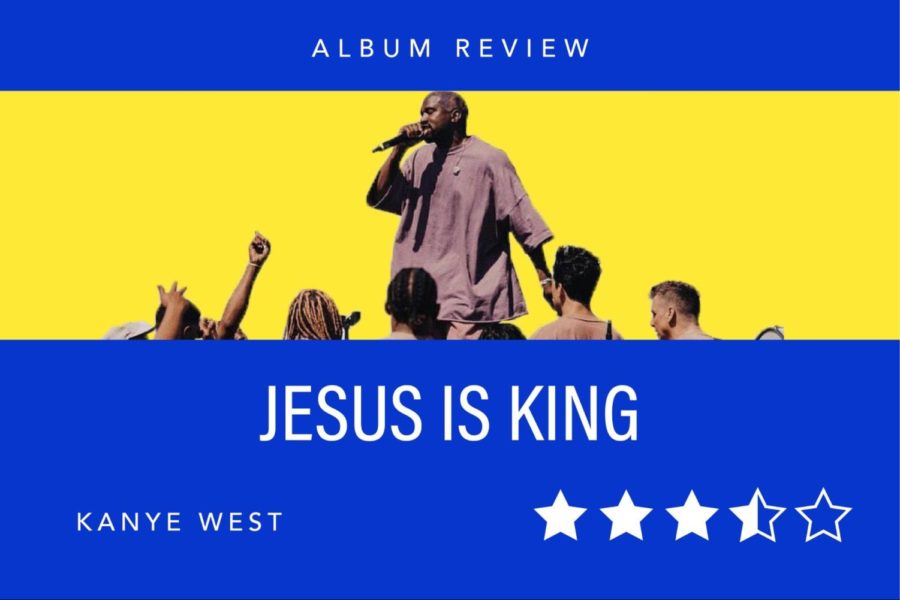 Rapper Kanye West released his album, JESUS IS KING, on Oct. 25. This is his first gospel album, contrasting his eight previous rap albums.

I stepped out of my math class and into a Southern Baptist gospel church on Oct. 25 as I put in my earbuds to listen to rapper Kanye West’s new album, JESUS IS KING.

Eight voices from Sunday Service Choir, a gospel-rap group started by West, surround the listener upon hitting play on the first track, “Every Hour”.

Well, that does not sound anything like his 2005 hit, “Gold Digger”.

Nor does it sound like any other rap song that has come out in the past two decades. West decided to release a gospel album after reconsidering the secular nature of his unreleased album, Yandhi. The album was supposed to be released in September 2018, but got postponed to November of the same year. However, some time along the way, he scrapped Yandhi, supposedly keeping just a few tunes, and made JESUS IS KING.

In terms of differences from his previous work, for starters, the album is all clean language-wise, which is quite the change of pace. And while we have seen West’s gospel side before, such as in singer Kelly Price’s feature in West’s “Ultralight Beam” (2016), this is a surprisingly unique tune.

Lyrically, West slips in dozens of biblical and Christian references, making references to Bible stories such as Adam and Eve and Noah’s Ark. Beyond the more subtle references to the Bible, “John 8:33, we the descendants of Abraham… John 8:36, to whom the son set free is free indeed,” puts it into more blatant terms in “Selah”.

However, the most iconic lyrics come from “Closed on Sunday”, a track fully dedicated to Chick-Fil-A.

“Closed on Sunday, you’re my Chick-Fil-A,” West chants. “You’re my number one with the lemonade.”

Despite the seemingly superficial lyrics, West ties in Christian references throughout the song. His mixture of talking about a fast-food restaurant to the Bible gives a fun but contemplative take on the song.

As much as the lyrics of “Closed on Sunday” speak deeply to the heart, West has left the lyrics, like most of the album, up to interpretation by fans.

The album is enjoyable, nevertheless. As a Christian myself, it is intriguing each time I listen through and catch another subtle biblical reference. It is also refreshing to see an A-list celebrity advocating for the non-secular aspects of the world. That being said, I would not complain if West went back to his old way of music in his next album.