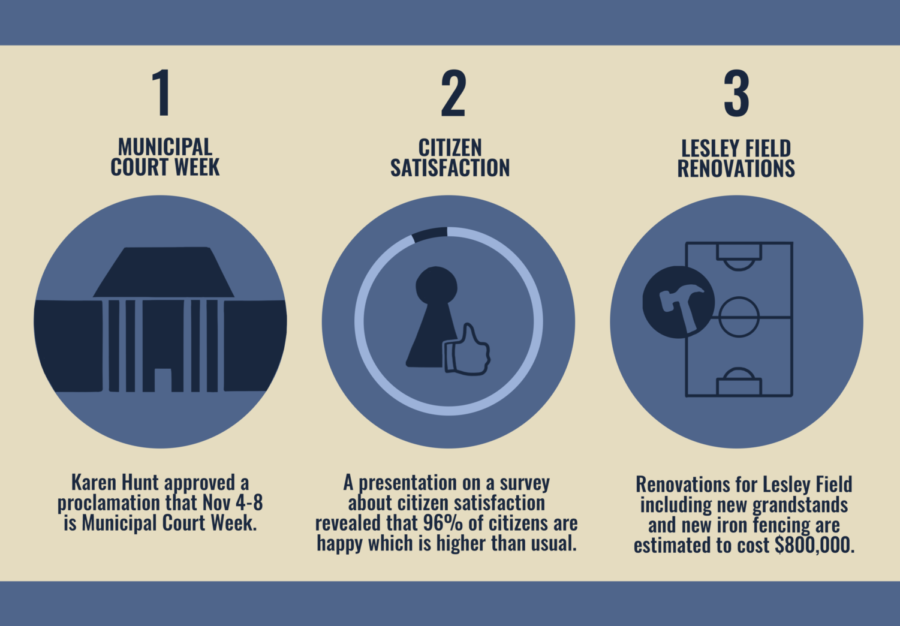 A city council meeting was held at the Coppell Town Center on Oct 22. Important issues such as Municipal Court Week, citizen satisfaction and renovations to Lesley Field were discussed.

On Tuesday, members of Coppell City Council met to discuss renovations to Lesley Field at CHS9. The results of the 2019 Coppell Citizens’ satisfaction survey were also presented and a proclamation regarding the municipal courts was approved.

Relating to CISD, councilman Biju Mathew reported that on Nov. 11, there will be a joint board meeting between the City of Coppell and Coppell ISD trustees.

Currently, Lesley Field is regularly used for CHS9 athletics as well as the Coppell lacrosse team. During the weekends, the field is often rented to private schools for practice.

The proposed renovations would require $800,000 in city funding. This cost would include installing new restrooms, a new concession building, new grandstands (bleacher seating, press box and speaker system) and new iron fencing. The discussion concluded with the council indicating favorable interest in pursuing the renovations.

Mayor Karen Hunt also named Nov. 4-8 as “Municipal Court Week”. By approving the proclamation, the mayor recognizes the role of the municipal courts in protecting justice. Presiding Judge Kristine Schwan Primrose plans to use the week to appreciate all the support the courts have received from the city