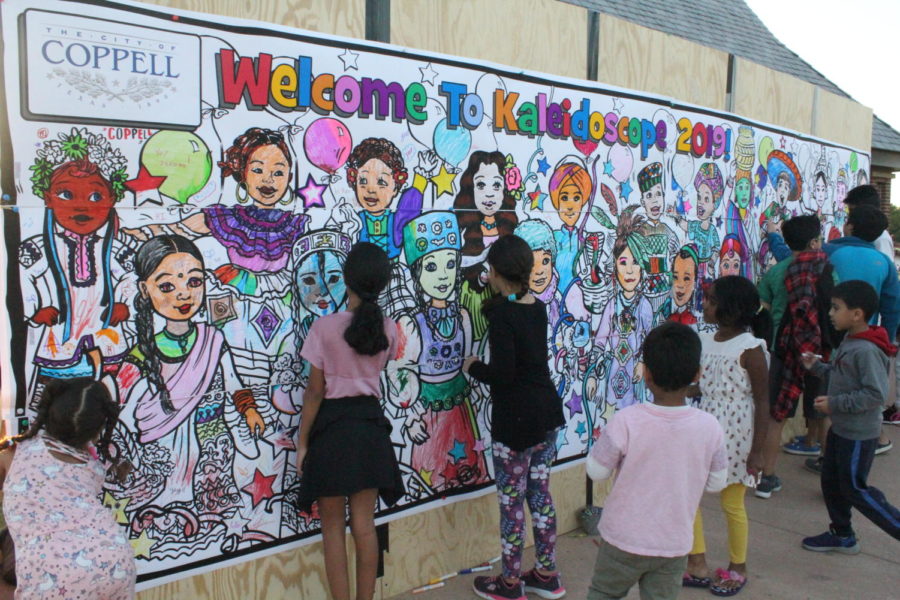 Attendees color on a mural which represents the various cultures in the Coppell community at Saturday’s Kaleidoscope at Andy Brown Park East. Kaleidoscope was held on Saturday for the third year to promote cultural diversity in Coppell.

The sudden burst of fireworks seized the attention of the audience as songs from different cultures blast through the speakers. Colored lights spread throughout the night sky, creating a kaleidoscope of colors.

On Saturday, the City of Coppell hosted Kaleidoscope for the third year at Andrew Brown Park East.

Kaleidoscope was created in hopes to highlight the grand scale of diversity within Coppell through a wide array of music, dance and food.

Attendees entering the event had a variety of activities waiting for them.

They could stroll through the different stalls for places such as the Cozby Library and Theatre Coppell, get their faces painted by Coppell High School National Art Honor Society members, taste food from places ranging from Asia to South America through food trucks or watch the performances taking place. Many attendees set up lawn chairs or a blanket and enjoyed the diverse array of performances taking place which included Irish dancing to traditional African dancing.

For many who attended Kaleidoscope, it was a thrilling experience to witness the life of other cultures.

“Kaleidoscope, in particular, is important because this community has become so diverse,” Coppell Fire Department captain Ryan Spencer said. “There are so many people from different parts of the world that live in this community now, and it’s important to bring everybody together so everybody knows a little bit about each other. It just helps us grow stronger as a community”.

While attendees learned a lot about various cultures, there was something they could contribute to this year: a mural.

A mural stood to the side of the entrance for attendees to color. The mural includes figures from every culture imaginable waiting to be brought to life with markers and crayons.

“I wanted something that everyone that came could like take and be a part of,” Coppell special event supervisor Sunday Smith said. “So I thought well you know we’ll put the mural up there and everybody that comes in can color it and say they were apart of this.”

While many children were heavily attracted to the idea of coloring, adult attendees also contributed to the mural.

“I thought it would just be kids [coloring the mural], but it isn’t,” Kaleidoscope staff Patricia Bilka said. “It’s not just kids, it’s also adults. Something like drawing, [that] everybody likes to do, brings people together.”

The finished mural does not have a confirmed location of where it will be displayed. Once confirmed, the location will be put out on Coppell’s parks and recreation facebook page.

“It’s just amazing to see the dances from different countries,” Kaleidoscope attendee Miriam Shumba said. “It just makes you appreciate that there’s not only one way to dance or perform. There’s so many different cultures to celebrate.”