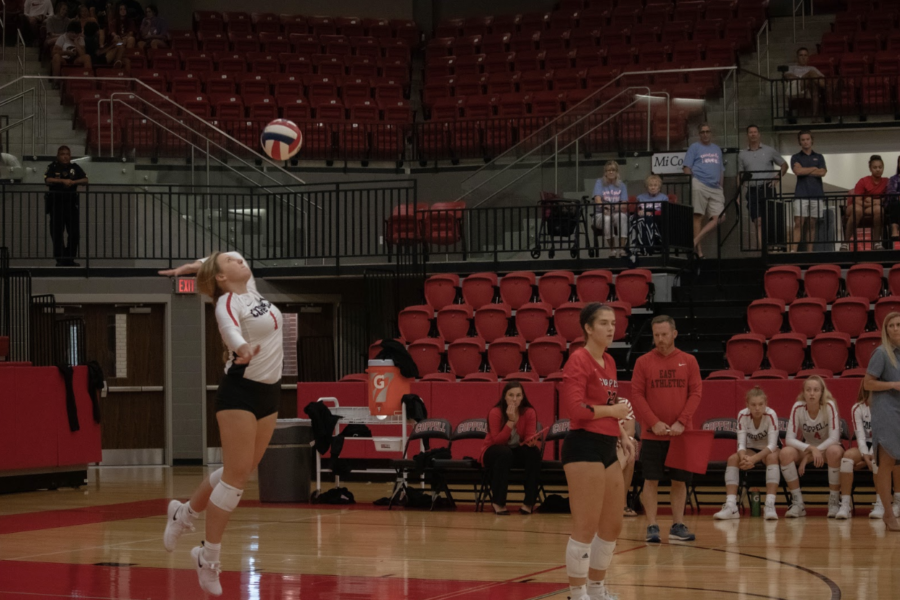 The Coppell volleyball team plays Flower Mound at 6:30 p.m. tonight in the CHS Arena in District 6-6A play.

Flower Mound is currently first in district and the reigning Class 6A state champions, making this match one of the biggest rivalries for Coppell. In the first round of district, the Jaguars triumphed against the Cowgirls, but Coppell was still able to win a set.

“As of right now, Flower Mound is ranked first in our district, and we’re actually the only team that’s taken a set off of them,” Coppell senior middle blocker Peyton Minyard said. “We’ve watched a lot of film on them; we’ve watched our game when we played them last round.”

To further prepare, Coppell is changing around some of the players’ positions for a stronger offense.

“Recently, we’ve moved some hitters around to be more aggressive on the pins, [near the antenna],” Coppell senior defensive specialist Victoria Wiegand said. “We think it’ll be really beneficial for us having stronger hitters on the outside and right side against Flower Mound, since they are a strong pin-hitting team.”

With Flower Mound’s high rank, playing well and winning would raise Coppell’s standing and set them up for the remainder of the season.

“This game is super important because one, [Flower Mound’s] the reigning state champ, so if you beat them, it’s a huge confidence boost and just shows who you are,” Minyard said. “Two, they’re ranked first in our district so that would make us go higher in rankings for district, and it really helps out in season playoffs.”