“Y’all’s”, the missing piece in the English language 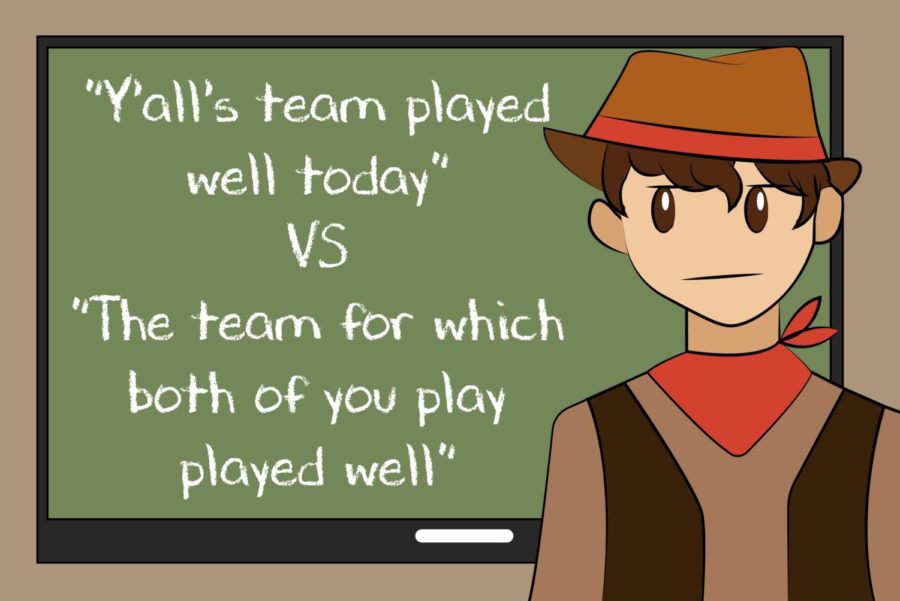 The word “y’all’s” is a plural possessive for the Southern contraction “y’all”. Staff writer Nicolas Reyes thinks this word should be added to the English language. Graphic by Shriya Vanparia.

Reading William Shakespeare’s work is a different type of pain.

It is not the quick cut of a guillotine, it is a dagger stuck in one’s side. It is a pain that cuts deeper with every stanza, a pain that keeps one breathing and bedridden but locked away from the serenity of death. Without SparkNotes, the Rosetta Stone of old-English, there would be no way to decipher his words.

Shakespeare’s work is proof that the English language changes, which is essential for the content temperament of the English-speaking people.

Now, the language must change once more.

The addition of the word “y’all’s”, which is for some reason still not an officially-recognized word, is needed because there is no other word that plays its role in our dictionaries; the language lacks a possessive plural when directly addressing multiple people.

If you were talking to two people and wanted to compliment their team’s performance, you would say, “y’all’s team played well today.” However, this is not grammatical.

The grammatical way of saying this would be “The team for which both of you play, played well”. One could also say “Your team played well”.

The first sounds unnatural and is not concise. The latter does not clearly address both subjects of the conversation.

“There are a few different ways you can say it, but it always ends up sounding clunky, it doesn’t end up sounding smooth,” Holmes said. “When we use ‘y’all’s’ it rolls off the tongue.”

Many English folks see their tongue as the pinnacle of language, a testament to the glory of their world-ruling days. Yet these are the people who speak in a mumble and decided to include the letter “r” in their language but refuse to pronounce it (watah instead of water). Contracting the words “you” and “all” and simply adding a possessive “‘s” should not prove to be difficult.

English people see Texas and all they see is the setting of the cowboy movies that grace their screens. They do not see Texas as the land that birthed the word that will finally complete the language they created.

Northerners may try to claim they have fixed the problem themselves with the words “you guys’s”, but the phrase reeks of a preppy barbershop quartet. Not to mention it is two words and has been ignored by pop culture with good reason.

For loyal supporters of “y’all’s” who are growing impatient with the mediocracy of the English language, fear not, the fix may come sooner than expected.

“The intermingling of cultures is so much faster today due to the internet. Languages are going to be changing a lot faster,” Holmes said. “‘Y’all’s has been around for over a hundred years and then we have ‘yeet’ which has been around for five years maybe and it has already made its way into the common lexicon of people. Language is changing faster now.”

Bobby Kennedy famously paraphrased a play by saying, “some men see things as they are, and ask why. I dream of things that never were, and ask why not.”

Some will ask why should we change the language?

I ask why not make it better?