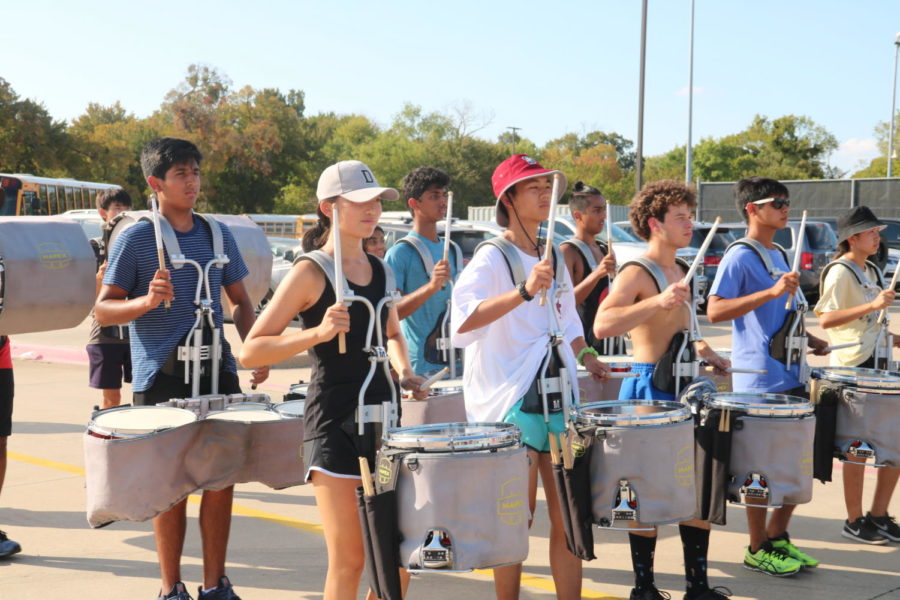 The Coppell Drumline marches after school on Sept. 26 in preparation for the Lewisville Drumline Invitational and Lone Star Classic competitions. The drumline won third place in the HEB Drumline Contest that took place Sept. 14.

Three weeks of grueling rehearsals in the summer and long evenings spent rehearsing after school paid off for the Coppell High School Drumline in the HEB Drumline Contest on Sept. 14, where it finished in third place with the best bass line award.

The HEB Drumline Contest, being the first in the season, is the drumline’s opportunity to premiere its show for the first time at a competition.

The instructors and students alike appreciate the uniqueness of the drumline show this year.

“This season has been pretty innovative with our drumline show and the band show,” CHS junior drumline member Yiwei Shen said. “It’s completely different from what we’ve done in the past.”

At the HEB show, Coppell Drumline received a standing ovation for its performance. More than the awards bestowed upon the drumline, the students and instructors recognize the emotions they feel and the audience’s reaction matters most for any performance.

“To come out in third and have so many people not even from our own school stand up at the end of the show and give us a round of applause really meant a lot, because at the end of the day, it doesn’t matter about scores, but the effect our music has on people,” CHS senior drumline member Vedin Barve said.

The group spends eight hours rehearsing outside of class every week, adding up to around 15 hours of weekly rehearsal. Additionally, the drumline rehearsed for three weeks before the start of the school year; some days had 12 hour rehearsals. However, this hard work and progress has not stopped with the HEB Contest and will continue as the drumline prepares for two contests in November: the Lewisville Drumline Invitational and the Lone Star Classic in Flower Mound.

If the HEB Contest is how the drumline tests out their show at a contest, the Lone Star Classic in November is the end result of an entire season of countless run-throughs. As its last competition of the season, it is by far the most competitive event that the drumline is preparing for.

“Lone Star is like the biggest one of the year, because it’s the last one,” Shen said. “It’s basically what this whole season has been building up towards.”

Despite the impressive results of the HEB Contest, the instructors refuse to let this impact rehearsal significantly. Instead, the performance is seen as a learning experience and every practice is performed as if it were being judged.

“Whether we win or whether we lose, it doesn’t really matter,” Coppell ISD percussion director Annie Chernow said. “We’re going to go after everything exactly the same way.”