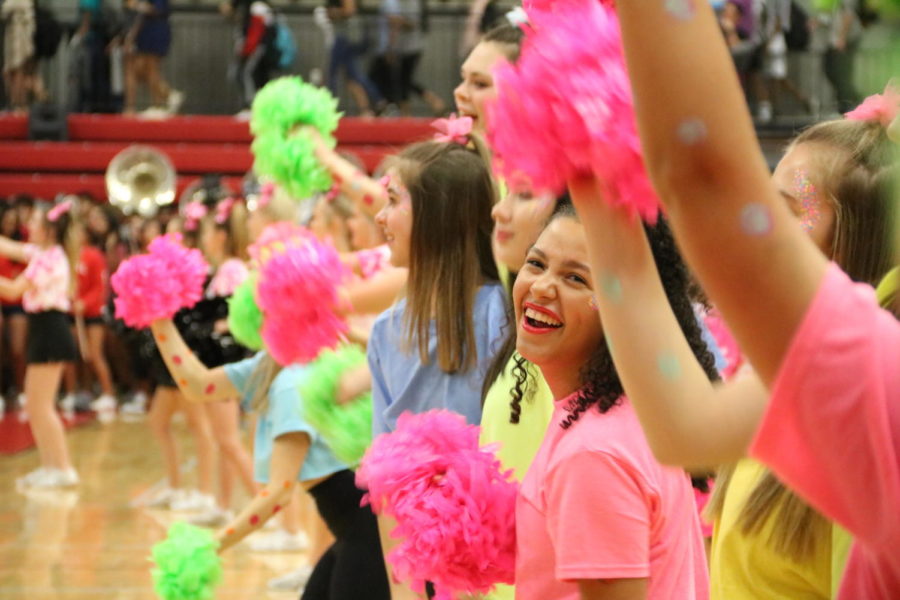 Coppell High School Lariettes dance to the rhythm of the band at the start of the pep rally in the CHS Arena on Friday. The pep rally was the second of the year, which included a performance by senior Langston Gardner singing”Shoreside” from his album Mystic Trail.

“We tried making [the drum battle] happen last time, but we needed a little more time,” CHS student body president Leo Swaldi said. “Everyone loves percussion, so we decided to do a battle where people can actually interact and vote on who they thought won.”

As tonight’s theme during the game against Hebron is “color explosion”, the Lariettes showed off a wide array of brightly-colored shirts during their performances.

“The pep rally dances are fun because they’re not the same as we usually do at games, they’re not as sharp and structured,” CHS junior Lariette Claire Bartlett said. “We put a lot into all of our dances, we prep at least two weeks in advance.”

“Red and black are our school colors, so I wanted to go red,” Bagley said. “If I can do anything to get everyone cheering, that’s important.”

Swaldi challenged him to dye his hair if a particular post on the student section’s Twitter (@chs_fans) received 70 retweets, and it received 200.

“Bagley is the symbol of the high school, he’s on the back of the shirts now, he’s always up on the speaker,” Swaldi said. “Everyone just loves Bagley, walking around in the hallways with a smile on his face. He’s loud, he’s proud, and it’s always great to see him with some frosted tips or red dye in his hair.”