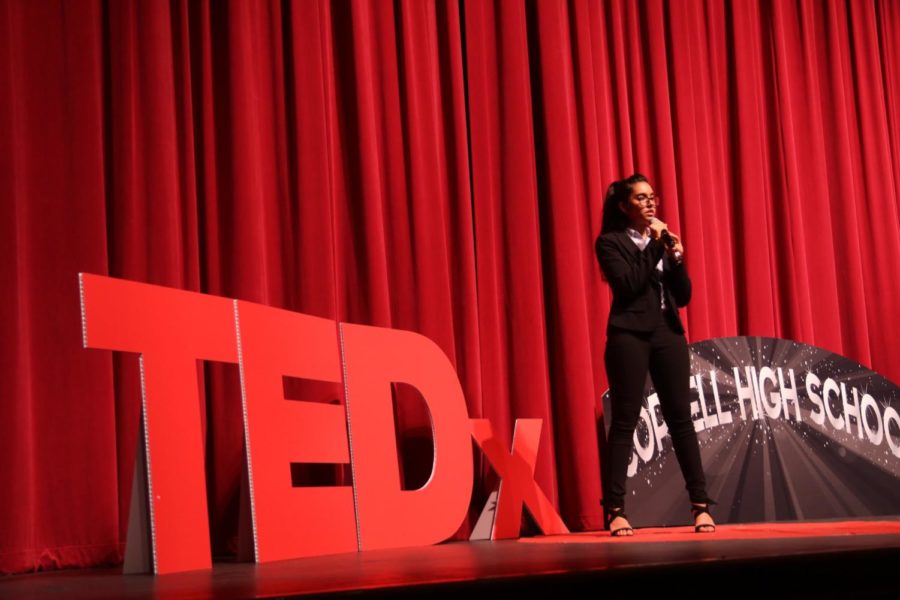 Coppell High School senior Aditi Mutagi discusses the burning of the Amazon rainforest during her TedxYouth Talk at CHS on Wednesday night. The event’s theme was “the world reimagined”, and speech topics ranged from showing gratitude to social media addiction.

As the clock hit 5:30 p.m. on Wednesday, the Coppell High School auditorium slowly filled up as students, parents and teachers trickled in to attend Coppell’s first TEDxYouth Talk in four years.

The event provided a platform for eight speakers to share their views on a diverse range of topics, ranging from innovative ways to save the Amazon rainforest to the need for LGBTQ+ education in public schools, all under the theme of “the world reimagined”.

The opening speaker on the stage was CHS senior Bikal Sharma, who spent 15 minutes educating the audience about the alarmingly low national voter turnout for presidential elections in the past decade and introducing a solution of his own. Sharma think people often do not vote due to a lack of incentive; if everyone who voted received a federal tax credit based on their tax bracket, that missing incentive would be born.

“We tell young people the technology itself is addictive,” Sabhani said in his talk. “When in reality its the stressful environment that pushes these people to get addicted.”

Sabhani claimed though this generation of teenagers is the “best behaved” statistically, the average stress level amongst teenagers has reached dangerous levels. Therefore teens use the likes of music, video games and social media to escape from it.

The event also included a powerful speech about the need for LGBTQ+ history to have a concrete place in the school curriculum from CHS junior Jordyn Morris, who also shared her own experiences as a lesbian in her talk. She also suggested that sex education, inclusive of LGBTQ+ topics, should be introduced more often in school.

Other talks included a motivational speech by CHS senior Ramkumar Castro titled “just keep swimming”, in which he urged the audience to adopt a preserving mindset in times of trouble.

“Obstacles are surely an innate reason on why quit on our goals,” Castro said in his talk. “But another major reason is that frankly, we just are not strong enough. Our mind is our most powerful weapon, and like any other weapon, it needs to be strengthened and honed. Essentially, we have to train our mind like any other muscle in your body, and in this case, putting yourself in situations requiring you to persevere is like going to the gym.”

CHS senior Aditi Mutagi’s talk focused on a proposition of using drone technology to plant seeds in barren pieces of land in the Amazon rainforest. CHS senior Alifiya Shaikh’s advised the audience “to transform your life for the better” by setting goals, making routines and eliminating distractions in life. CHS senior Umama Suriya discussed the importance of being thankful in life.

The event came to a close with Todd Storch, a member of the Outlive Yourself Foundation, talking to the audience about the foundation’s motto – “Outlive Yourself” – and how to tackle a problem in life.

“It was amazing from start to finish, our kids did a great job,” CHS Principal Laura Springer said. “The speeches were remarkable, and the whole event went smoothly thanks to [CHS senior and event organizer] Nasser [Alexander] and his team. We want this to be an annual event, next year we will advertise it much more. This was our first run at it, and it was smooth as silk and remarkable. So we would absolutely want to have it again and for years to come.”