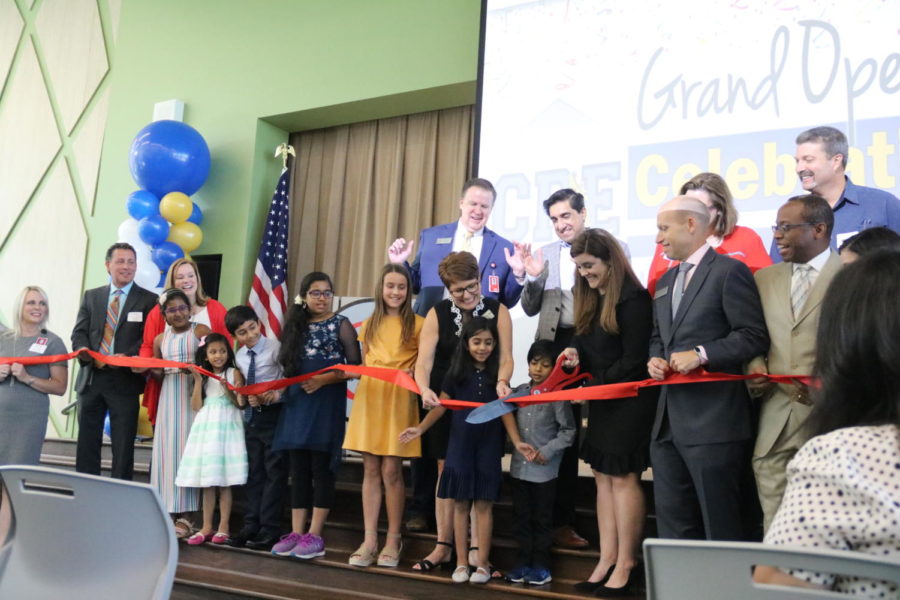 On Wednesday, Canyon Ranch Elementary Principal Ashley Minton cuts the red ribbon to commemorate the official opening of the school. CRE is the 11th CISD elementary school and was built to combat the overpopulation issues throughout CISD schools.

IRVING – The sight of the luminous energy of second graders welcoming attendees filled the hearts of many at the Canyon Ranch Elementary grand opening ceremony.

On Wednesday, CRE hosted its grand opening to officially commemorate the beginning of the 11th Coppell ISD elementary school.

CRE is the result of the 2016 Bond package and a solution to combat the overpopulation issue happening throughout CISD schools.

From its design to its core curriculum, CRE differs the traditional elementary school.

Like Richard J. Lee Elementary, built in 2014, CRE implemented the “house system” as one of its integral systems.

But CRE is taking a different approach.

“That vertical system allows them [students] to build community, build relationships, [have] mentor opportunities, and the curriculum too, they [CRE teachers] can plan vertically and meet the kids needs,” Canyon Ranch Elementary Principal Ashley Minton said.

Many teachers enjoy the benefits of the house system.

“We can come together to do things like community circles, [and] relationship building with everybody in the house system,” CRE fifth grade teacher Julie Bowles said.

While much thought was put into an effective way of teaching, the school’s design is shaped to be instrumental to a student’s success.

“We realized as an educational community, where you learn, where you live, impacts what you learn,” CISD Board of Trustees member Leigh Walker said. “That’s different from what people thought 50 years ago in education. It was much more utilitarian. Now it’s like, what is the best place for these kids’ souls?”

To answer these questions, the school is designed where certain rooms correlated with certain moods and emotions.

The library is painted in a blue tone in order to elicit moods of relaxation while the houses and learning areas are painted with warm colors such as orange and yellow to stimulate brain activity. Brain research was conducted in deciding what colors to put where.

Not only that, but the color schemes also have another important meaning.

“The design team that worked on this picked a theme that inspired the color scheme in our building,” Minton said. “You’ll see oranges, blues, greens and greys, and that represents Earth, wind, fire, water, and the natural elements.”

To accompany these choices of color, natural light is also prioritized giving views of the Valley Ranch area to students. A majority of the rooms have windows capturing natural light.

The school’s open spaces foster collaboration, creativity and a sense of learning together amongst its students.

“My favorite thing about Canyon Ranch is probably the library because I’ve never seen a library that cool,” CRE fifth grader Bianca Podval said. “Especially with the domes in the wall and the great variety of books we have.”

With years of planning and months of construction and preparation, the CRE community is more than ready to create a foundation of learning for generations to come.

“It’s been fun to see it come to life, but I am excited for us to get to see the learning that takes place now,” Minton said. “Our kids starting to shine because of the environment they’re in and the design of our educators, and I’m just really excited to see that part start shining.”