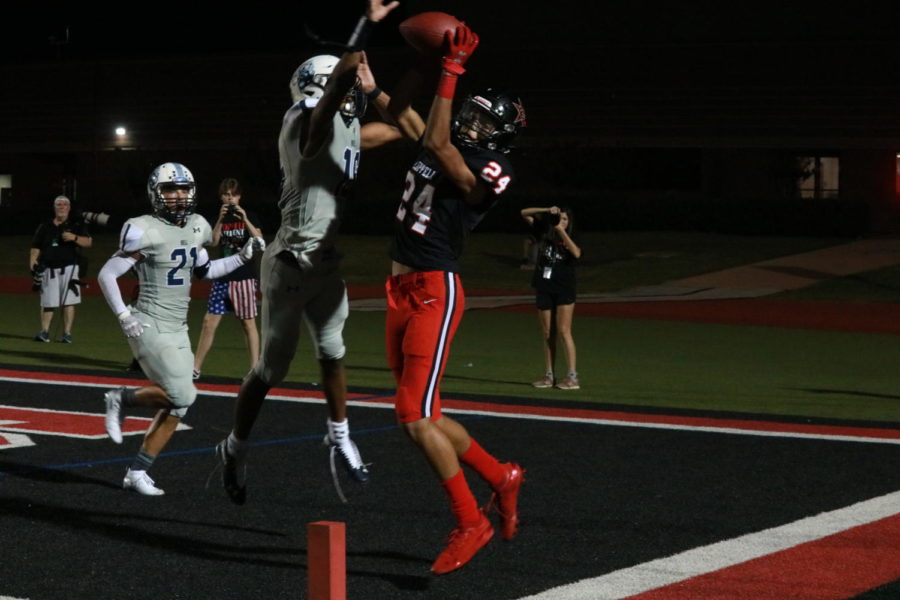 Coppell sophomore wide receiver Anthony Black attempts to make a catch in the endzone. The Cowboys won their first home game of the season, 17-10, against L.D. Bell on Friday night at Buddy Echols Field.

The Cowboys took down L.D. Bell, 17-10, of Friday night at Buddy Echols Field. The Cowboys (1-1) showed improvement on both sides of the ball, as they prepare to keep this momentum for next week’s big game with Allen on Friday night.

The Coppell offense, lead by Walker, was able to put up two touchdowns through the air both to sophomore wide receiver Anthony Black. The ground game was able to slow down the Blue Raiders (1-1) defense, with big runs by junior running back Jason Ngwu.

“During practice the offense had to adjust to a different quarterback, but we executed it very well in the game,” Black said. “We were able to beat the secondary and the offense was flowing throughout the game.”

The Coppell defense improved from last week’s game against Sachse, as it was able to put pressure on the quarterback and make big plays in the backfield.

“We came back this week and improved on sending pressure to the opposing line,” Coppell defensive coordinator Justin Merchant said. “The defense is coming together, and it is only going to get better.”

Along with sending pressure on the opposing quarterback, the Coppell defense was able to hold down the Blue Raider ground game.

“We had to keep looking over the film and see where we went wrong last week,” senior defensive linemen Rodney Mccarty said. “We have a big game next week and the defense is ready to get the job done.”

Coppell will travel to Eagle Stadium in Allen to take on the Class 6A state champions and currently No. 62 nationally ranked Allen on Friday night.