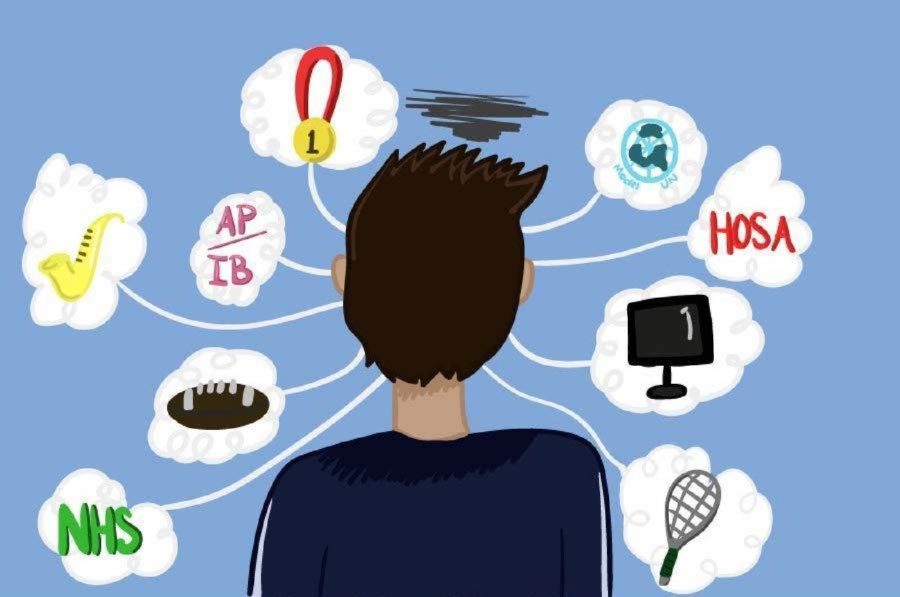 In recent years, there has been a rise in the number of high school students who participate in activities for the sole purpose of helping their college applications. The Sidekick staff writer Akif Abidi explains how obsessing over padding for college applications can be harmful to one’s college career.

In recent times, colleges are giving more weight to a student’s extracurricular activities by looking beyond just test scores and GPAs. This, hypothetically, is great, as it allows students to explore the world outside just their textbook and pursue their passions.

Unfortunately, in competitive environments not unlike Coppell High School, the overly ambitious nature of high school academics at times seeps into the extracurricular side as well, giving birth to a deplorable practice – résumé padding.

In order to have a better chance of getting accepted to a good college. résumé padding can be defined as students lying by overexaggerating their involvement in activities their college résumés, and dipping their feet into as many different waters as possible by committing to many extracurricular activities just for the sake of ‘diversifying’ their college résumé . Adopting this mindset ultimately results in a résumé putting a student’s artificially crafted personality on display, with the only purpose being to impress.

“To me, [padding] is an internal characteristic.” CHS student counselor Cheryl Abreu said. “That’s who you as a person, it shows no integrity or character. If your willing to pad your résumé , what else are you willing to lie on or do to get what you want?”

I know students, friends even, who join clubs that sound fancy, chase officer positions and give it no dedication, just so that they can come off as more successful on their résumés.

However, this definition of success is a twisted one; your personal happiness and growth, not your image in front of others, is what should be what comes to mind when you think of success. In its essence, résumé  padding constructs an artificial shell, and for students taking part in résumé padding, relying on a mask rather than their real self to get things can become a norm in life.

“Creating this early stage cycle of doing something for the sake of the application creates a long term negative effect on the individual from a personal standpoint,” Li said. “Because you’re not really doing anything that is very genuine to yourself… You are artificially spending your time developing interests that would have never interested you otherwise.”

Clubs are some of the most notorious tools of résumé  padding. CHS sees the creation of many new clubs at the beginning of the year, but not all clubs remain active. With only a few meetings the entire year, they essentially become dummy clubs. Though the administration made an effort to ensure clubs stay active by requiring one meeting every two weeks, sometimes the weak enforcement from both the sponsors and the school lets clubs get by just meeting once every few months.

Résumé padding can also pave the way for corruption in school organizations. Students who do not possess any passion for a club’s activity sometimes end up as an officer because their friend is the president or because they have all of their friends vote for them in officer elections.

With this competitive, toxic nature in the air, some students feel anxious about not having enough on their résumé  and in turn, try to follow suit and end up in the same rabbit hole. This feeling of being left behind is a dreadful, contagious one. I would be lying if I said I never thought about ways to pad my résumé as an unknowing underclassman who was just trying not to be left behind in the rat race.

Fortunately, I learned that it is best to invest your time in a few different extracurriculars that feel more like a passion rather than just another class. Having a few core activities with depth display a better work ethic and determination than being in 10 unrelated clubs and activities lacking any depth.

“When you are the president or officer of a math, Spanish, arts, and some science club, and you also play several sports teams at school, when all your extracurriculars don’t come together and tell a holistic story… it doesn’t really make sense from the perspective of an admissions officer trying to understand you and figuring out why they should accept you,” Li said. “There is simply no point in fabricating an application to get into a better school because it damages your morals, and ultimately your morals are what travels far.”

In the end, it’s important to remember that though getting into a very prestigious university certainly corresponds to more potential when you search for jobs, other colleges are capable of offering the same potential. What ultimately decides the weight of that potential in any college is no one but you and your work ethic.

Sacrificing your morals and ethics to get into a college brings a detrimental cost because you will know that it was your ability to manipulate lies, not your achievements and personality that brought you there.