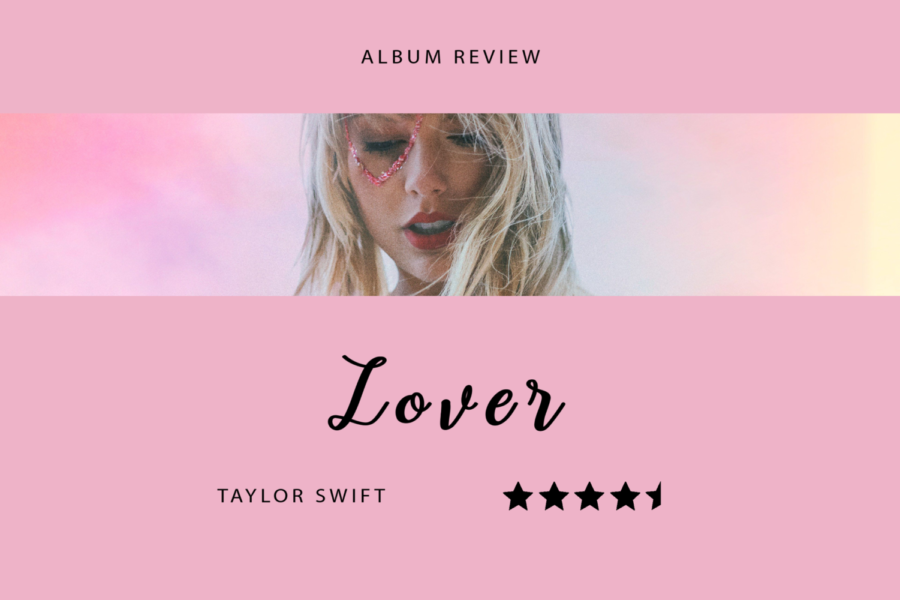 Taylor Swift’s seventh studio album, Lover, released Friday. Preceded by No. 2 singles “ME!” and “You Need to Calm Down,” Lover broke the Apple Music records for most pre-saved album by a female artist and most pre-added pop album on its first day.

Disclaimer: I am a fan of Taylor Swift, but have aimed to be as unbiased as possible.

In the liner notes for Red, an album revolving around the emotional turmoil accompanying toxic relationships, Taylor Swift wrote, “Real love shines golden like starlight…maybe I’ll write a whole album about that kind of love if I ever find it.”

Seven years and three albums later, Swift has found it. The result is Lover – her best album to date.

Much in the way that Red feels like a literal emotional rollercoaster, Lover, too, explores a wide spectrum of emotions. But instead of ending mostly with heartbreak and scarves left at a sister’s house, Lover ends in tranquility, love and hypothetical wedding vows.

Fans may notice further parallels between Lover and Red. Album highlight “Cornelia Street” is the hopeful, pop adjacent of the heart-wrenching “All Too Well,” while “Paper Rings” is “Stay Stay Stay” if “Stay Stay Stay” was actually good. Lover’s title track is an acoustic waltz that, aside from sounding like it was pulled straight from a 1950s high school prom, would fit perfectly on Red. On the beautiful closing track, “Daylight,” Swift even says, “I once believed love would be burning red, but it’s golden.”

However, Lover also pushes Swift’s boundaries, resulting in some of her most interesting and exciting songs.

“I Forgot That You Existed,” for example, is a refreshingly chill, conversational diss track over a Jackson 5-esque riff, serving as a bridge from 2017’s reputation; “Miss Americana and the Heartbreak Prince” tells a dystopian high school romance story, which, upon closer inspection, paints a bleak portrait of modern American politics; “The Man” sees Swift considering the effects of sexism on her career; “False God,” an R&B slow jam with a sultry saxophone, compares passionate love to religion, while “It’s Nice To Have a Friend,” an eerie steel drum-infused lullaby, tells a love story from elementary school to marriage.

Of course, Lover is not without its weaker moments. The positive yet sadly generic “You Need to Calm Down,” hollow-sounding “Afterglow” and lyrically disappointing lead single “ME!” featuring Brendon Urie of Panic! At the Disco drag down the album’s second half.

Otherwise, Lover is incredibly strong – an impressive feat considering its 18-song length (making it her longest album to date).

Perhaps this is due to Swift’s work with co-writer/producer Jack Antonoff, whose signature ‘80s influence is evident throughout much of the album, from the reverbing synths of “Cruel Summer” and “The Archer” to the glossy production of “Death By A Thousand Cuts.” This brings an element of unity to an album that would otherwise not be cohesive.

Or perhaps it is because Lover is, quite simply, Swift at her lyrical and melodical finest. The album’s best track, “I Think He Knows,” is pop euphoria with a touch of Nashville charm (“He got my heartbeat skipping down 16th avenue”). “Soon You’ll Get Better” is a heartbreaking country song about her mother’s cancer, with backing vocals by the Dixie Chicks. “London Boy” is catchy and lighthearted, in which Swift states, “God, I love the English.”

“You are what you love,” Swift says as “Daylight” fades out and Lover’s sprawling journey comes to an end, and nothing could sum up the album better. It is a breath of fresh air, an epic display of Swift’s artistry and her most impactful statement yet.