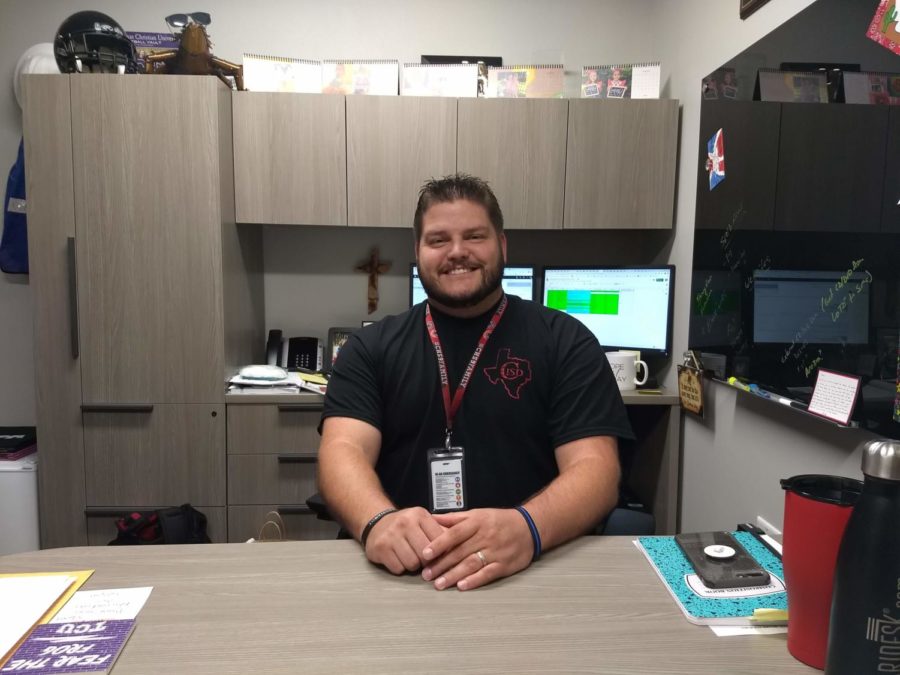 CHS9 Principal Cody Koontz talks to The Sidekick about new developments at the freshmen campus and plans for the coming school year on Aug. 16. Main changes to the campus include the C day schedule and the new Coppell ISD technology plan.

How has the beginning of the school year been?

This group of students seems very polite and personable. It may be that we’re not as frantic in opening a new campus, but we’ve gotten a good vibe from them and they seem to be acclimating quickly. Our biggest challenges have been related to transportation. We have almost 100 more students this year than we did last year, and that means more buses and more routes. When you factor in the new C day schedule, every minute you’re late cuts into an already-short class period. We’ve [also] had some problems with the end of day shuttles, because [they] tried to pick up at the south side of our building, but it hadn’t been able to fight through the parent traffic. We’ve changed that to pick up in the back, where the other buses pick up. Once the bus routes clean up, we’ll be able to fully implement it.

What is your biggest concern for the 2019-20 school year?
There are other schools in the area that have ninth grade campuses, but they’re right next door to each other. We don’t have that luxury, being located farther away from the main campus. That has caused a lot of concern in the sense that we have interest in certain classes, and we can’t always allow a certain number of seats because we’re limited by teachers or by space. We’ve tried to expand some of those options a little bit and partner with the high school to meet those needs. It just makes it very challenging because then the question starts being asked, “Well, you’re doing it for this class or this program, are you going to open it up to this class or this program?”

What specific things have you learned from last year that you’re looking to implement?

Last year, we were building everything. That was the campus physically, that was processes, it was policies, it was leadership. We’ve made tweaks to almost every system that we have in place, whether that be the shuttle system or where we locate and schedule classes. Another lesson I’ve learned personally is that the time for administrative tasks will always be there, whether it’s before school or after school, [but] the time with our kids is limited.

How do you think the new technology plan affects CHS9 and its classrooms?

One of the things that was a big struggle in the past was guaranteeing that students had equal access to the same technology. We had a math teacher last year [Algebra I teacher Lucy Grimmett], who wrote for a PTSO grant to purchase styluses for her iPads so students could use Notability in math class. It was awarded, and she was able to let them do that. Similar to Ms. Grimmett, [English teacher Ashton Wright] had written a grant for keyboards on iPads for her class. There was an era in schools where BYOD, or bring your own device, was a big thing, and there were arguments made that handheld devices could be used for educational purposes. Now, with the technology we’re giving to students, there isn’t a need for that.

What do you think of the new C day schedule?

I’ve been on block schedules most of my career, as a student, as a teacher, as an administrator. What the C day schedule brings to us is consistency. I love that for [the first week of school], our students got to see every teacher at least twice, and on a normal week, they’ll see each one three times. While it may have felt like a longer day because of all the transitions, it’s a good built-in day, especially for kids [who] may have missed a day that week.

What are the main events you have planned this year?

For this year, we’re going to shoot for having [pep rallies] at the same time and on the same days as CHS. For the first time this year, we have a freshman cheer squad. We have a freshman band, we have our own band director. We have choir, we have the Silver Stars [drill team], we have our own athletic teams. We really can host pep rallies independently, and we did that last year, just a couple of times, and realized how well it went. This year we’re going to shoot for two or three in the fall, at least one that covers the spring and winter; then we’ll see how it goes, and we may do one more.