Engineering juniors to blast off to summer NASA experience 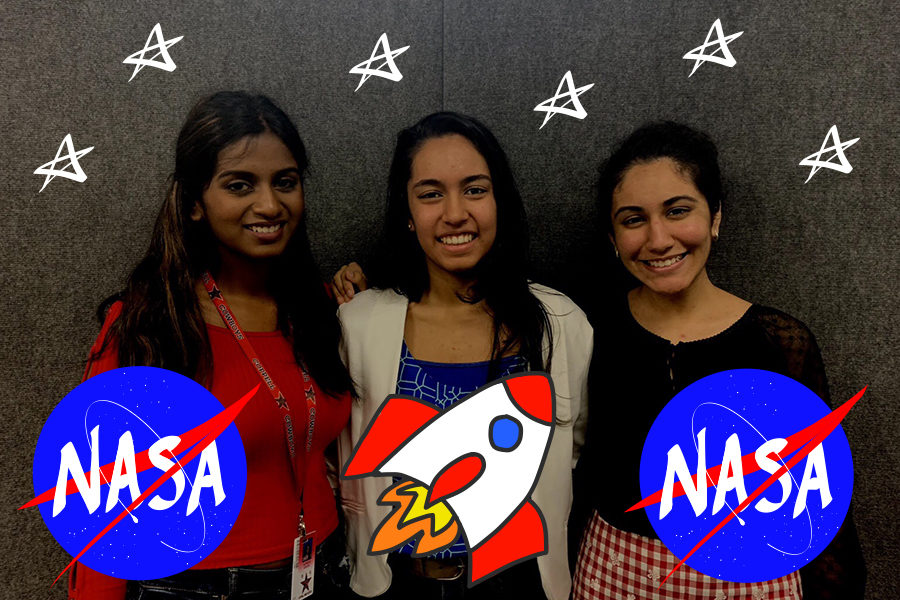 Coppell High School juniors Suprita Ashok, Aditi Mutagi and Akansha Singh qualified for a learning experience this summer at NASA’s Johnson Space Center. These students, along with four others, were nominated for the program for their intelligence in math, engineering, science and computer science. Photo illustration by Olivia Palmer and Lilly Gorman.

For seven Coppell High School juniors, passion and dedication opened a wormhole to opportunity and dreams.

After passing a rigorous four-month online course, these seven will be spending one week this summer at NASA’s Johnson Space Center in Houston for an all-inclusive weeklong immersive internship. Here, the students will work with leading engineers in the space technology field in a hands-on study.

The program is guided by online course that runs from November to February. Each month, students study a module with lessons that focus on the stages of a real Mars mission. These interactive tasks include studies on the sustainability of life on the planet Mars, the mid-20th century Space Race, the International Space Station and more.

“There was this one course problem where we had to mathematically find the probability of other intelligent life existing in the universe,” CHS junior Suprita Ashok said. “I didn’t know you could do that with math! That was pretty cool.”

The challenges are not limited to mathematical problems; tasks such as land rover and space station design are introduced. Assessments and deadlines follow all coursework.

“You’re already busy with school; there’s so much going on, and it’s junior year too,” Ashok said. “So keeping up with deadlines can be tough, especially since the coursework takes a good two hours to sit down and figure out. [The challenge is] just time management.”

Students who performed well in the online course were selected to attend one of six designated week-long internships in Houston. There, they can participate in a design challenge with other juniors from around the state.

“For me, this is a great opportunity to learn about that career,” CHS junior Aditi Mutagi said. “I want to work at NASA one day, so seeing the engineers and what they do is really great for me. I’m really excited to see it.”

In previous years, Coppell has not had a strong showing in the High School Aerospace Scholars program. That is, until last year when 11 CHS students saw admission into the program. Last year, CHS senior Alexander Gross earned first place for his aerospace design. Four of Coppell’s seven qualifiers this summer are female.

“It’s well known in academia and all over STEM that girls start loving the STEM field in elementary, and then when they get to middle school, they start dropping,” CHS STEM lead teacher Pilar Castro-Zena said. “In high school, the ladies need those doors open, they need the support [and] encouragement.”

This support is abundant from Castro-Zena, who gives the students the materials and resources necessary for success. This, combined with the students’ efforts, sets them on the path for success.

“I made sure they networked and supported each other,” Castro-Zena said. “That’s the way I was able to make sure they were able to finish it. That’s probably the reason why so many of them finished [the program] this year. And I’ll know how to make it better for the next year and so on.”