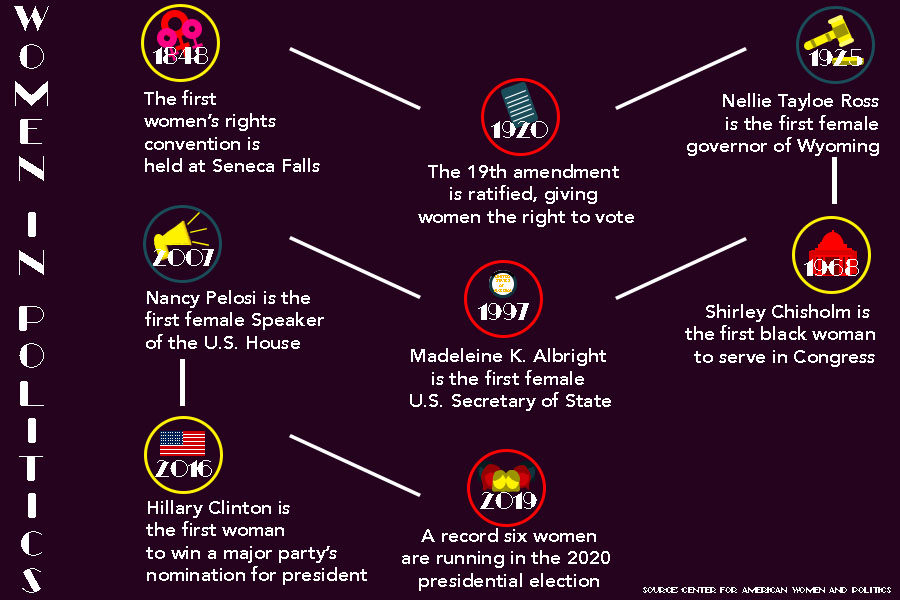 The women’s rights movement has been growing in the United States since the 1800s. Recently, women’s roles in government have increased; one example is Hillary Clinton’s presidential campaign in 2016 leading to six women running for president in 2020.

In 1863, Abraham Lincoln described the U.S. government as “for the people and by the people,” a valiant vision for a country founded on freedom and liberty.

In 2018, America came closer to that vision.

One hundred and seventeen women were elected to Congress in 2018: 102 to the House of Representatives and 15 to the Senate, making up 23.7% and 25% of their respective chambers. Nancy Pelosi, who was the first female Speaker of the House in 2007, took the gavel once again.

A democratic government, one for and by the people, must accurately reflect the population it serves. Women comprise 50.5 percent of the U.S. population – a truly equal government should reach gender parity. While women still only comprise a quarter of Congress, it is remarkable to see the gains made by women in the past year.

This wave of women could be seen as a rebuke to the misogyny of recent years: President Donald Trump’s campaign and the subsequent election was tainted by claims of sexual misconduct and evidence of sexist statements. Supreme Court justice Brett Kavanaugh’s confirmation hearings in late 2018 served as a bleak reminder of not only the prevalence of sexual misconduct (particularly against women) but the fact a fair amount of Americans still see it as locker room talk and a dismissable offense.

The year 2018 sent a clear message: women are tired of lingering in the background, their ideas and visions remaining whispers and issues remaining afterthoughts.

“Women are bringing in the issues that were left behind – they’re making it a statement,” Coppell High School U.S. Government teacher Bybiana Houghton said. “A big policy right now is equal pay – women have been trying since the 20th century to pass the Equal Rights Amendment. A second issue would be pro-choice versus pro-life – issues within abortion have become so complex, but because women are in office they are bringing new perspectives to light.”

Perhaps what makes 2018 stand out is not just that a record number of women ran and were elected to office; in 2018, this could be seen as normal.

“It used to be an anomaly [to have women in government], and it is becoming more of the norm, which I think is a good thing because then people distinguish candidates by who is the better candidate,” Coppell Mayor Karen Hunt said. “It evens the playing field on all levels.”

In addition, a more diverse government brings more perspectives and skill sets to the table, which is a beneficial asset when considering the diversity of thought in America.

Some of the most notable candidates from the 2018 midterms have been newly elected Democrats, among them representatives Alexandria Ocasio-Cortez (D- N.Y.), Katie Hill (D- CA) and Katie Porter (D- CA). These representatives have become some of the House Oversight Committee’s most effective leaders, using direct and thorough questioning.

With sharp sights set on 2020, the women’s wave continues with a profusion of female presidential candidates, each carrying substantive political experience and refreshingly new experiences.

The changes in societal impressions and the situation of women in politics are exemplified through the contrasts between the 2016 and 2020 presidential elections.

Democratic nominee Hillary Clinton and her campaign had their flaws, but numerous obstacles Clinton faced appeared to be rooted in misogyny – she was a woman vilified for years for having ambitions comparable to those of men, was deemed cold when men of similar personalities did not receive similar negative treatment and her extensive experience seemed to be weighed less than her personality.

Currently, female candidates for the 2020 election have seemed to avoid such obstacles; they are judged on their policy proposals more so than likeability and warmth.

Ninety-nine years since women were granted the right to vote, America has begun a new chapter of leadership. We have only traversed half of the path to achieve true gender equity in government, but it is my hope that we reach the end of the path soon. The women who dared to run for office blazed the trail for many others to follow in their footsteps by leading through example, showing that women can be equally qualified, dependent and worthy candidates.

It is now our responsibility to vote for the qualified women who run and encourage many more, in order to help others to take that trail.